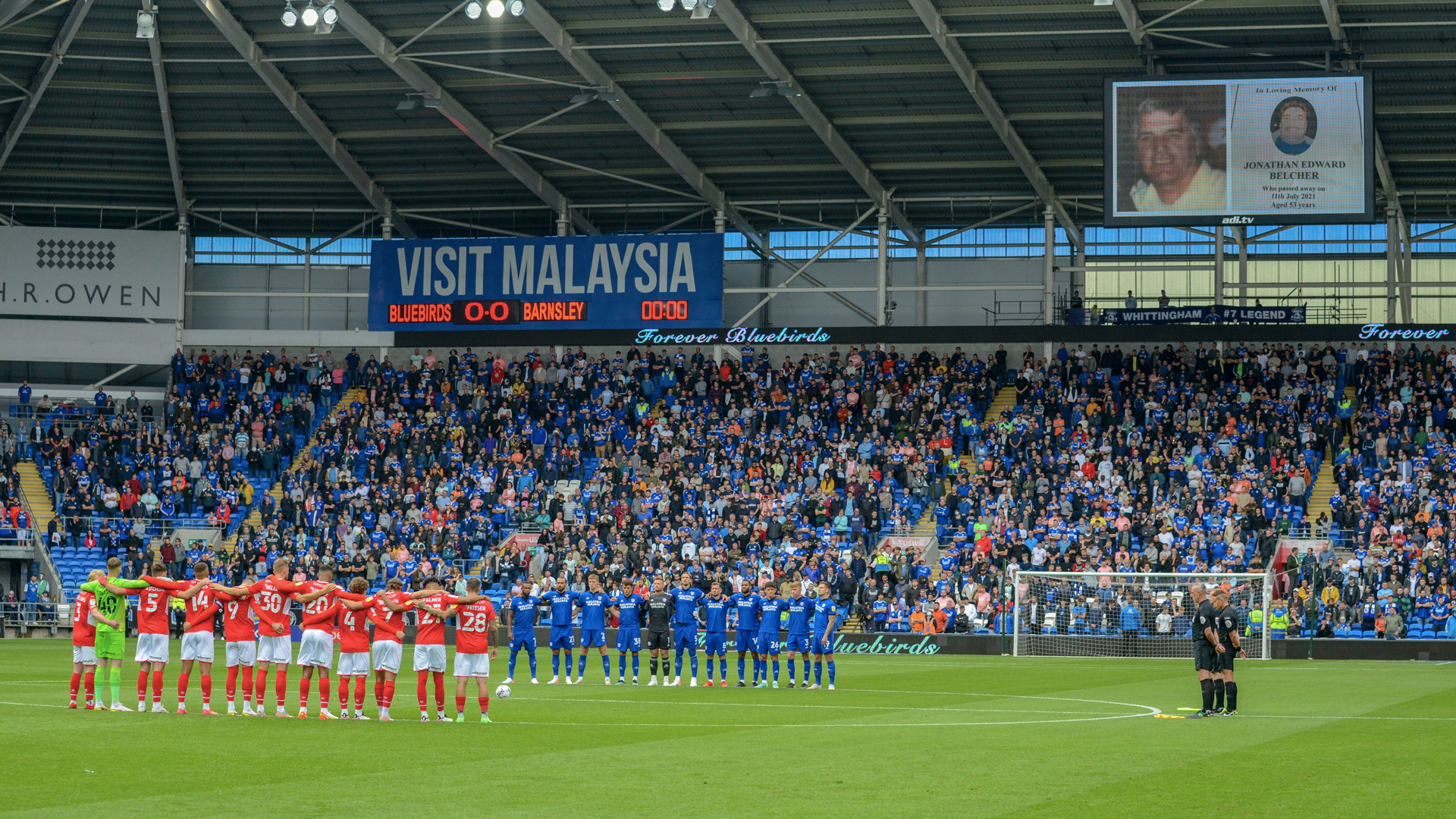 Cardiff City and Barnsley players pay tribute to those who died in the 18 months away. Pic: CCFC

Mick McCarthy joined Cardiff City fans in an emotional tribute to the late Peter Whittingham – before hailing another sweet striker of the ball playing in blue.

The Bluebirds manager admitted he once tried to sign Whittingham, who died in March of last year, meaning this was the first opportunity of returning fans to honour arguably the club’s most talented player in their history.

After a big screen tribute to the midfielder, along with more than 200 fans who have passed away in the past 18 months, it was left to McCarthy’s new signing Ryan Giles to rekindle memories of Whittingham’s artistry.

The young winger – on loan from Wolves – created a host of chances Cardiff were unable to convert as well as the corner from which Marlon Pack headed them in front.

“It was emotional and having fans back in was great, but it was just a shame we couldn’t turn it into a win,” said McCarthy.

“Having fans was fantastic. I’ve been around a lot of crowds and that was as good as any. I hope we can improve on that and give them something to really shout about.

Cardiff fans have paid tribute to Peter Whittingham in their first game back since he passed away 💙💙
pic.twitter.com/2qHKQowa1P

“I thought Ryan did very well. He is a player who is not a defender, but he can do left wing back. He is exciting and the crosses he puts in. It’s a real weapon for us.”

“It was strange when he came, because someone put him down as a defender, which he’s not, quite clearly.

“But he can do left wing back. Joel is 19 and he will need a bit of help, although I thought he did well. It was great to see him back from his shoulder injury.

“The front three created chances, James (Collins) crossed one, Gilo has crossed a couple… What I love about Leandro Bacuna is he was getting in there. If someone is there to miss chances, I will forgive that.

“He has come back from international duty and he has had Covid and been off for a while.

“I think he has got up to speed superbly well. I was delighted with his overall performance. But no one will be more disappointed than him, because he has had the chances.”

Pack had begun where he finished last season – by scoring.

It was the midfielder’s goal on the final day of the last campaign that sent Rotherham down to League One, while here he gave Cardiff a deserved lead in the 54th minute with a thumping header from a corner.

The ball had been swung over from Giles and Barnsley allowed all their disciplined work for the best part of an hour to be undone through slack marking.

But rather than use the lead as a platform on which to build, the Bluebirds eased up too early and were caught well before the home straight.

Benson – a 21-year-old picked up from Premier League Burnley – struck a magnificent through ball just six minutes after coming on.

His defence-splitting pass released Sibbick, galloping down the right, and the full-back was able to gather without breaking stride to fire past Dillon Phillips in the Cardiff goal.

Both sides had earlier had goals ruled out for offside when it was still scoreless.

James Collins – Cardiff’s summer signing from Luton – thought he had opened his new account in the first half but his header, nodded across to him from Curtis Nelson, was scratched by a raised flag.

So, too, was Dominik Frieser’s effort, painstakingly constructed by the visitors in the Cardiff box just after half time.

New boss Schopp admitted: “Having the crowd back again makes the game different.

“From Barnsley to Cardiff is far so we appreciate all the fans who came. It is nice that we could get a point for them.”

“I remember the shot of Cauley (Woodrow) and the finishes of Carlton (Morris). Cardiff also had chances but, over the 90 minutes, we had a bit more.”

Despite the sense of expectancy in the home crowd, Cardiff were mostly restricted to counter-attacks in the early stages.

Their most direct should have ended with them going in front, but Ryan Giles’ cross into the path of Leandro Bacuna was side-footed over the bar from eight yards.

Giles continued to look Cardiff’s biggest threat and his partnership with Collins must have encouraged manager McCarthy.

The Cardiff boss had left his Wales striker Kieffer Moore among the substitutes along with Euros teammate Ruben Colwill after both players tested positive for Covid last month.

Giles thought he had sparked the opening goal in the 26th minute when his free-kick was headed across goal by Curtis Nelson, and then in by Collins, only to be ruled out for offside.

Barnsley’s best effort of the half followed just a minute later when Cauley Woodrow beat Joel Bagan in the box but saw his low shot palmed away superbly by Dillon Phillips.

The visitors’ Michal Helik then denied Bagan a goal at the other end with a last-ditch tackle and it remained goalless at half-time.

Cardiff city 1 Barnsley 1 in the EFL Skybet championship this afternoon, good to have the noise back in the stadium. pics by Andrew Orchard pic.twitter.com/qMZRsE34z8

Another cross by Giles was spooned over by Bacuna, before it was Barnsley’s turn to have a goal ruled out for offside.

This time the flag was raised after Dominik Frieser had slotted home from Carlton Morris’s pass.

But it was Cardiff who took the lead in the 54th minute when an outswinging corner from Glies was met with a firm header from Pack.

It was the midfielder’ second successive goal in as many league matches as it was his goal that sent Rotherham down on the final day of last season.

But Cardiff were unable to build on their lead and 15 minutes later, Barnsley equalised through Sibbick.

A superb long pass from substitute Josh Benson released Sibbick who took the ball in his stride before firing past Dillon Phillips in the Cardiff goal.