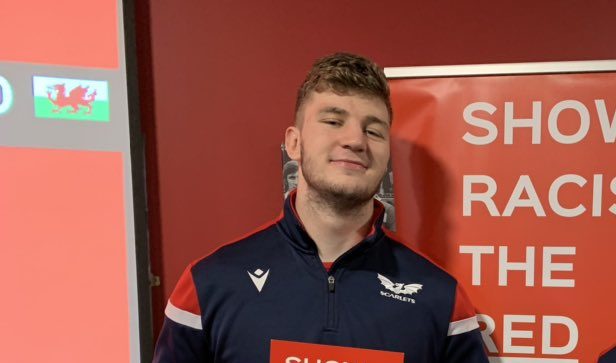 Morgan Jones is ready to step into Jake Ball’s large boots at the Scarlets – and has even been tipped to fill those of mighty Alun Wyn Jones for Wales.

Jones is literally growing into the second row position at the Scarlets and feels big enough these days to shoulder any expectations of him.

The gangly second row on whom the region took a punt three years ago is blossoming into one of the best young locks in the professional game.

His arrival on the senior scene this season has been so impressive that last week’s news about the departure of Ball at the end of the season wasn’t being viewed as being as big a disaster as it might have been.

Along with Jac Price and Josh Helps, the 21-year-old Jones is making an impact and impression that few believed possible when he first arrive in the land of his grandfather.

His red card has been rescinded and he is free to play from this weekend #GuinnessPRO14 pic.twitter.com/LPHObOMEUR

Today, he is viewed as a readymade replacement for Ball at the Scarlets, while others see him as a potential long-term candidate to take over from namesake Alun Wyn – now 35 – in a  Welsh jersey.

“All I’m trying to do is improve with every training sessions and every game. I’m fighting for my place in the Scarlets side at the moment and that’s the only thing on my mind,” says Jones.

“Being able to play for the team I supported as a young kid, and used to go to watch with my grandfather and father, is just incredible.

“Making my debut in the PRO14 and Heineken Champions Cup this season has been mad.

“The only downside is that my family haven’t been able to come and watch me play live yet. My dad is an even bigger Scarlets fan than me.”

Born and raised in Nuneaton, Jones was in the Leicester Tigers academy system up to the age of 18 and his father took him to watch the Tigers play the Scarlets as a young boy.

He left the Tigers when he was 18 and feared that might probably be the end of his professional rugby ambitions.

But then came a call from the Welsh Exiles co-ordinator, Gareth Davies, and his life took a whole new twist. He joined the Scarlets, undertook a degree course in criminology and criminal justice at Swansea University, and left the Midlands to live and learn in Llanelli.

“It was a big step to leave home for the first time, but I knew I was going to our family’s spiritual home where my grandfather was born and raised,” says Jones.

“The Scarlets put me up in a house in the town and I got stuck into my three years course at Swansea University. Now I’ve got a degree and I’ve broken into the senior squad.

“It has been a nice compliment to be mentioned along with a number of other young Welsh locks as a potential candidate for higher honours, but for the moment I can only concentrate on trying to earn a starting berth at the Scarlets.

“It was sad news about Jake leaving at the end of the season and being able to train with him has been a blessing for me. He has taught me so much.

“His departure will leave a hole and an opportunity. I just have to do whatever I can to battle with Jac and Josh to prove I am good enough to try to fill it.”

Having grown in stature from 97 to 115 kgs, and 6’ 4” to 6’ 7” in the three years Jones has been at the Scarlets, he is now big enough to plug any hole in the second row that appears in any professional side.

His performances to date have also grown and along with the already capped Adam Beard and Seb Davies, Scarlets team mates Price and Helps, the Ospreys duo of Rhys Davies and Will Griffiths and the Dragons’ Ben Carter, Jones is now being mentioned in despatches whenever anyone writes about who will step into Alun Wyn Jones’ massive boots when he decides to hang them up.