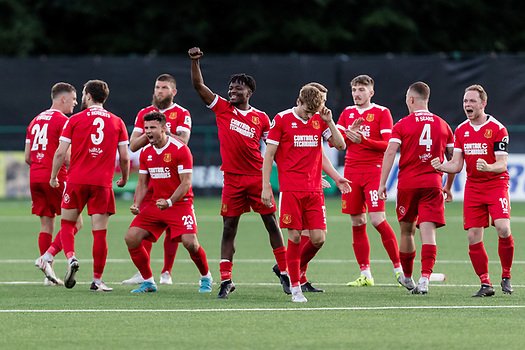 Lifumpa Mwandwe’s name will be fondly remembered around the semi-rural confines of Newtown’s Latham Park for many years to come.

An inspired display from the Robins, including a starring farewell performance from Canada-bound Mwandwe, saw the club rally back from their first-leg defeat to HB Torshavn and claim a 2-1 win in the second-leg, which was eventually settled via penalties.

Bala Town were not so fortunate in their away leg against Sligo Rovers, reducing the number of Welsh clubs competing in Europe down to two.

Despite winning 1-0 thanks to David Edwards’ goal (2-2 aggregate), the luckless Lakesiders crashed out in Ireland, losing 4-3 on pens.

Newtown’s Henry Cowans opened the scoring at Park Hall, Oswestry (for UEFA requirements) before Mwandwe struck shortly before half-time to give the Robins a 2-0 lead (2-1 aggregate).

The Faroe Islanders hit back after the break to level the aggregate scoreline and force the tie into extra-time and penalties.

And it was Mwandwe who scored the decisive goal in the shootout to send Chris Hughes’ team into a money-spinning Europa Conference League second qualifying round tie.

Mwandwe’s performance comes days after Newtown announced they had agreed a transfer with Canadian Premier League side Halifax Wanderers, and that the second-leg would be his final appearance for the club.

The 21-year-old couldn’t have scripted his exit from the club any better – although perhaps not quite over 120 grueling minutes.

“I don’t know if I could write stuff like that. I think that’s the first 120 minutes I’ve had before and honestly, I’m not planning on having any more again – next time I’ll try and score more goals in 90 minutes.” he quipped.

Newtown returned back from last week’s first-leg empty handed after a 1-0 defeat in difficult conditions cast doubt on their hopes of progressing, but Mwandwe says he was always optimistic they could turn the tie around in his final game.

“I felt like we owed them one in the home game after we played them away. I didn’t think that, when they came here, on our terms, they could trouble us,” he said.

“They did get the goal in the second-half but we didn’t panic, we stuck to our game and we won.

“I’m definitely sad to leave, but leaving with a memory like this, you can’t complain.

“It’s a good way to win and to sign off. I’m happy for the lads and wish them good luck in the second round.”

With Mwandwe heading to Nova Scotia, Newtown have little time to prepare for next week’s second round tie in Slovakia against Spartak Trnava.

THE CARROT OF EUROPEAN FOOTBALL
The Robins are however boosted by a windfall of at least €350,000 in prize money from their European run. Advancing to the third round would see that increase to €550,000.

Cymru Premier champions The New Saints are due an even bigger payout after dropping into the Europa Conference League second round following their elimination from the Champions League first qualifying round against Linfield.

Saints take on Iceland’s Vikingur next week having already banked €890,000.

Newtown are at least €350,000 better off as a result of tonight's win.
Bala Town were a crossbar's width (twice) from pocketing a similar amount, but take home €150,000.
By my calculation TNS are set to pocket at least €890,000, even if they get knocked out in the next round. https://t.co/OzqY9FA5Z3 pic.twitter.com/ri4XUIG87Q

These are considerable sums indeed for Welsh domestic clubs, who barring The New Saints, are semi-professional outfits. The prize money on offer for competing in Europe carries an enormous appeal for clubs who otherwise have a scarcity of income streams.

And chasing the dream of European prize money – which in reality is often more significant than actually competing against obscure continental clubs – can be a high risk game.

There are too many stories in Welsh football of fallen clubs who have gone by the wayside after over-stretching their resources and living unsustainably in hope of hitting the European jackpot.

There are far fewer clubs who have been able to compete in Europe on a semi-regular basis whilst remaining sustainable and resisting the temptation to overspend.

Refreshingly, it seems modest Newtown are the blueprint for any club aspiring to reach the highest level in Welsh domestic football.

Now enjoying their third European adventure under the safe hands of long-serving manager Chris Hughes, the club’s success should not just be celebrated in the streets surrounding Latham Park, but across Wales football for just what can be possible with astute planning, decision making and of course, some Mwandwe magic.