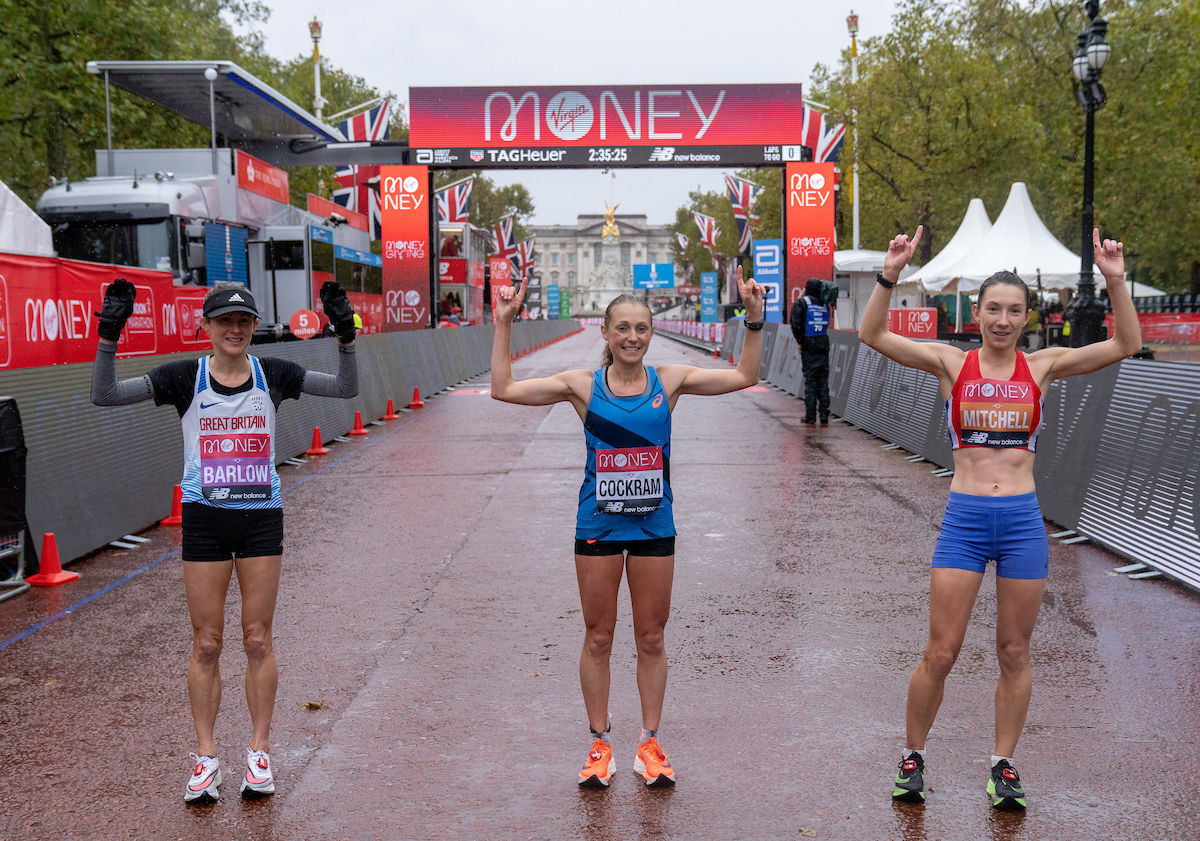 The Micky Morris Racing Club runner was involved in a thrilling race for the British title in the closing stages of the elite-only event which was held in cool and wet conditions within a biosecure course around St James’s Park.

Despite an injury-hit build-up Cockram accelerated down the iconic finishing straight on the Mall to finish first in the British title race and 13th overall in a time of 2:33.23 – outside her personal best of 2:30.49.

“Being at the start line was just a surreal experience. I am just really thankful for the team behind me who have worked tirelessly in the last two or three weeks to get me here today,” said Cockram.

“I didn’t give up, I kept going, just pushed through. My legs were a bit sore by the end, the last lap I couldn’t really feel much but just kept pushing.”

“I think it’s given me a lot of confidence, just because, like I said last year, I couldn’t even run, wasn’t even sure if I would make the start line.

“I haven’t worked out in a couple of weeks either, just been on the cross trainer. It gives me a lot of confidence going forwards so long as the next build up goes a bit smoother than this one.”

Cockram had been hoping the British “race within a race” would be highlighted by the BBC TV coverage and she wouldn’t have been disappointed.

While the overall race was won by world record holder Brigid Kosgei, of Kenya, in 2:18.58, a fascinating “Battle of Britain” was unfolding behind.

The cameras regularly focussed on Cockram’s duel with the likes of British favourites Steph Twell and Lily Partridge.

However, both those much-fancied British athletes both dropped out of the race around the halfway stage, despite having faster personal best times than the Welsh athlete, who was looking strong despite having suffered an injury scare in the run up to the race.

Just after halfway, Cockram was leading the British Championship women’s race and the Gwent athlete looked on her way to an Olympic qualifying standard and the British title.

However, Reading athlete Naomi Mitchell surged through the field to overtake Cockram in the final quarter of the race and looked to be on her way to a massive personal best as she opened up a sizable lead.

But Cockram wasn’t beaten yet and with a couple of laps to go, the Gwent athlete regained the lead in the British Championships race.

As she heard the unfamiliar bell for the final lap of a marathon, Cockram had once again opened up a commanding lead.

Cockram powered down the iconic finishing straight on the Mall to finish first in the British title race and 13th overall.

Cockram had been hoping to gain the Olympic qualifying standard of 2:29.30. However, places in the Great Britain squad for Tokyo were not on the line at this event.

Selection will be based on a British Marathon Championship that will include the Olympic trial during spring 2021.

Sunday’s unique London Marathon race was started in near darkness at 7.15am by Welsh wheelchair racing legend Tanni Grey-Thompson in unfamiliar circumstances as the athletes set off on 19 laps of an enclosed course due to COVID-19 restrictions.

There was further Welsh interest as Cardiff Athletics’ Jenny Nesbitt did a brilliant job of pace-making the group of British Olympic hopefuls up until the half-way stage of the race.