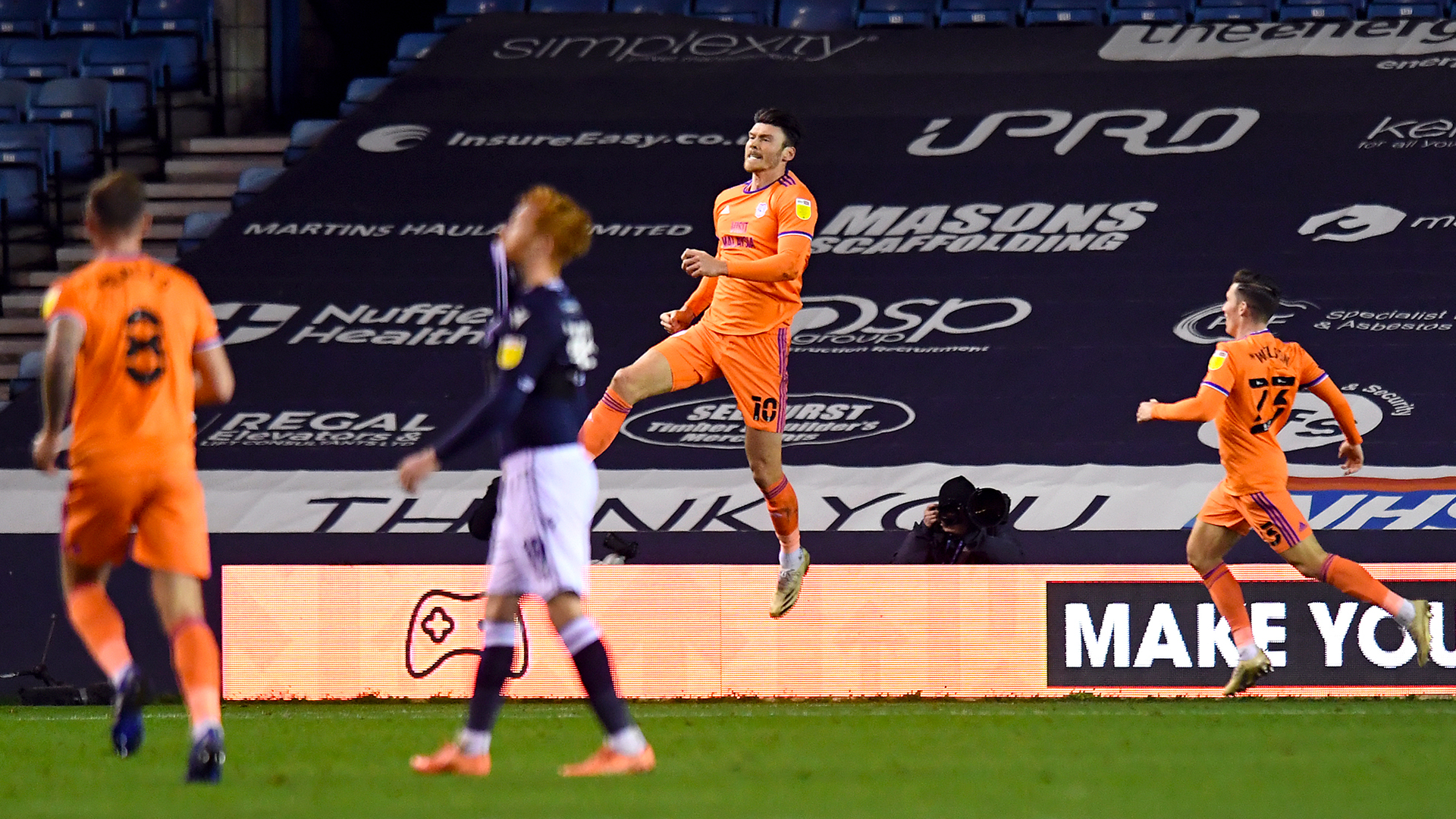 Kieffer Moore celebrates as his fourth goal for Cardiff City grabbed a point at Millwall.

Neil Harris reckons all the stats show that Cardiff City are a top six side – apart from the one that matters!

The Bluebirds boss was left frustrated again after a Kieffer Moore leveller ensured his return to Millwall did not end in defeat.

But City have now won just once in seven Championship games – leaving a side expected to challenge for promotion in 15th spot – and Harris ruing a lack of a clinical edge.

“We have done research over the last few weeks, based on expected goals and chances created, conceded, every stat going we are in the top six – apart from the points total,” said Harris.

“Ultimately, that’s what matters. I’m not one to hide behind stats.

Tough place to go but happy to have got something today after going behind! Onto wednesday 💪🏼⚽️ @CardiffCityFC pic.twitter.com/j689gT973e

“That has to translate to a Saturday afternoon. Did I see it this afternoon? I did in the second half.

“But it’s fine looking like a good team on paper, but we need to win games of football.”

Harris, the Lions’ all-time leading goalscorer returned to the Den for the first time since leaving the Millwall manager’s job in October 2019 taking over at City soon after.

And it looked set for a miserable return as Matt Smith took advantage of some poor defending to give the home side the lead.

But Moore’s fourth goal since his move from Wigan – netting after a good pass from sub Josh Murphy – ensured City a point.

Harris’ side could have snatched victory with Harry Wilson and Moore drew fine saves from Bartosz Bialkowski though Jon Dadi Bodvarsson probably should have won it for Millwall.

“I was disappointed to be behind in a game that had nothing in it, especially in the first half.” Harris added. “Curtis Nelson and Alex Smithies have held their hands up in the dressing room; it’s a lack of communication, and you can’t give Matt Smith chances like that.

“But it’s not just about the goalkeeper and the back four, it’s about everybody being defensively ruthless. My disappointment is that we conceded a goal when we shouldn’t have, and then we needed to score two goals to win the game.

“In the second half, especially after we made the substitutions, we looked really threatening.

A brilliant showing in the final 15 minutes – if only we played the full 90 like that!
Thoughts on the point? 👇 #CCFC

“It was a quality finish, and a great ball by Josh. They are the moments that Josh Murphy has to give us; whether he’s in the starting eleven or off the bench, whether he’s playing in a wide area or as a second striker.

“He does have that ability to score a goal out of nothing, or create something from nothing.

“When you create those chances, you have to take them, and Kieffer’s finish was outstanding. Białkowski made a couple of good saves to deny us, and it was going to take something special to get past him today.”

“In the Championship you have to deny people opportunities and if that game is 0-0 at 60 minutes or 70 minutes I think we go on and win that.

“We have to start winning games of football, that goes without me having to say that.”

City could do with a win at Coventry City on Wednesday as they enter a hectic period of games if they want to figure among the play-off contenders come the New Year.

Harris added: “I don’t just look at today, but the next four games, and what’s coming up this week.

“For today to become a really good point, we have to follow it up with a good performance, and more importantly three points against Coventry on Wednesday. Ultimately, that’s what matters.”