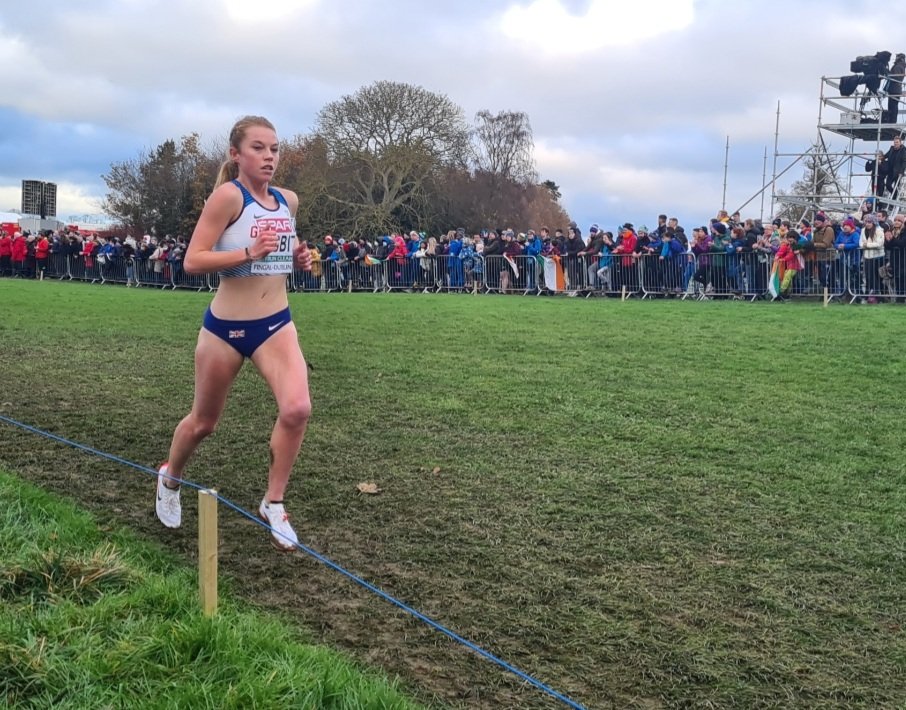 Perrin led the way in the first race of the day on his Great Britain cross country debut as he helped the under-20s to team victory in Dublin on Sunday.

The Menai Track and Field athlete finished 22nd overall individually to back up top ten finishes for team-mates Will Barnicoat and Hamish Armitt.

Perrin, who covered the 6km course in 18 mins 49 secs, said afterwards: “It was great to make my GB debut in the cross country.

“I went out with the leaders but I just couldn’t hold the pace. I’m still an U20 next year so I’ll learn from this and come back stronger next year.”

There was also team gold for Nesbitt, who told Dai Sport before the championships that she wanted repeat the senior women’s team gold she won in Lisbon two years ago and improve on her 29th individual placing.

The Cardiff athlete delivered in style on both counts as the women emulated their team achievement in Portugal and Nesbitt came home in 10th place overall, clocking 27:58 over the 8km course.

A delighted Nesbitt said afterwards: “Coming into this race, I really wanted to prove myself and I aimed for top 12, so I am happy to have ticked that box.

“I’m delighted to have contributed to the success of the team, so pleased to have won gold alongside them.”

Nesbitt also paid tribute to her coach Chris Jones, the Welsh National Coach and lead Great Britain coach at the championship in Ireland.

“I think I’ve put together my most consistent winter season, and that’s credit to Chris,” she said.

“I think this season has set me up well for an indoor track season, so I’m happy with how it has gone.”

Like Nesbitt, follow Cardiff Athletics clubmate Hughes was a medal winner at the 2019 Championships in Lisbon when she came home with an under-23 team bronze.

And she matched that achievement on Sunday when she helped the GB under-23 team to a third place finish.

I first met Chris in 2015 when he was team manager for me as an u23 @ Euro Cross. 6 years later, 4 years of working together, grateful for all the time, effort, support and belief he puts in each day and his persistence in teaching me to train smart! https://t.co/bwxfgipzyY

Hughes, who herself finished in 16th place clocking 21:23 over the 6k course, said: “I really enjoyed that race.

“There was so much support all the way around the course. I’ve done a few European cross country champs but this was one of my best experiences.

“I’m so pleased with my performance. I get so nervous before I compete, but I think after the last two years with COVID and everything, it is hard to come straight back into this environment.

“I went off steady and came through so I’m happy overall. And the team came third, so I’m delighted for the rest of the girls.

It was a successful day all round for the GB team as there were also individual gold medals for Megan Keith (women’s under-20) and Charles Hicks (men’s under-23) and a gold in the 4x1500m mixed relay.