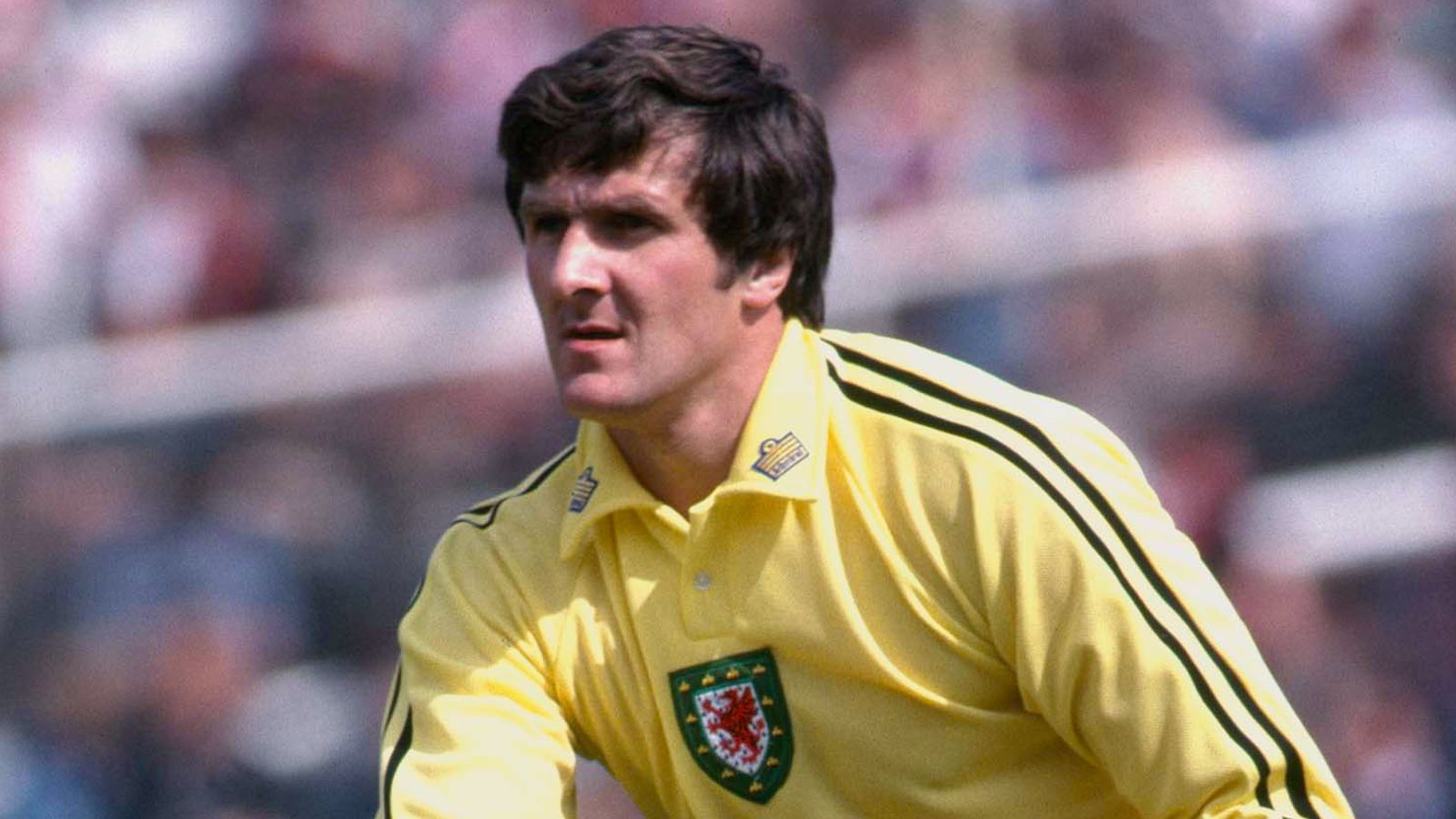 Figures from across Welsh football have been paying tribute to former Wales goalkeeper Dai Davies, who had died at the age of 72.

The former Everton, Wrexham, Swansea City and Tranmere keeper was diagnoised with terminal pancreatic cancer last year, and was treated at the Royal Hospital in Liverpool before being moved to the Nightingale Hospice in Wrexham.

Once Wales’ most-capped keeper, Davies made 52 appearances for his country before going on to run a health clinic and enjoying a long and successful career as a pundit, particularly in Welsh language broadcasting.

Following the news of his passing, Everton and Wales legend Neville Southall lead the tributes as he credited Davies with playing a huge influence on his career and described him as ‘an inspiration guy’.

Southall tweeted: ‘RIP Dai Davies. My friend, a gentleman, an inspiration guy and a proper welsh man, a great mentor and a top keeper.’

Davies, who was born in the Welsh mining village of Glanamman in 1948, began his career at Swansea, where he signed his first professional contract in July 1969, but made only nine league appearances for his local club before joining Everton in a £40,000 deal in December 1970.

Everton were English champions at the time and Davies found himself third choice behind Andy Rankin and Gordon West.

But he remained patient and the 1974-75 season saw him established as the number one goalkeeper at Goodison Park.

Davies’ form saw him win his first Wales cap in Budapest in April 1975 – a 2-1 victory which marked Hungary’s first defeat at the Nep Stadium for more than 50 years.

Having established himself as Wales’ undisputed number one, he was part of the side which reached the quarter-finals of the 1976 European Championship.

Davies made over 80 appearances for Everton before joining Wrexham in 1977 and helping the club to the Third Division title and Welsh Cup glory.

Swansea boss John Toshack brought Davies, who was often unfairly referred to as ‘Dai the Drop’, back to the Vetch Field following their promotion to the first division in 1981.

The £45,000 was well spent as Davies played a key role in Swansea finishing sixth in the 1981-82 season, just four years after the club had been playing in the Fourth Division.

Davies left Swansea in 1983 and finished his career at Tranmere, Bangor and with a short second spell at Wrexham.

The Sgorio team are deeply saddened to hear the news of Dai Davies’ passing.

Dai was a crucial member of the team for many years – an honest and astute pundit, a fantastic mentor and a friend to all members of the production.

Our deepest condolences to the whole family. pic.twitter.com/CdDopE8ivk

When he played against Scotland at Swansea in 1981, Davies overtook Jack Kelsey’s record of 41 caps.

He later returned to Swansea and had a spell as player-manager at Tranmere before retiring.

After his playing days came to an end, Davies ran a natural heath clinic in Llangollen and was the first Welsh footballer to be admitted to the Gorsedd of the Bards, a society of poets, writers, musicians, artists and others who have made a notable contribution to Wales, its language and culture.

Davies eventually settled in north Wales where he was part-owner of a Welsh book and craft shop.

He also worked as a teacher before running a natural health centre, specialising in remedial massage, muscle work and reiki.

A proud Welsh speaker, he was admitted to the Gorsedd of the Bards at the annual National Eisteddfod festival in 1978 and was a regular football pundit for BBC Wales and Radio Cymru.

Dai Davies Back On His Feet In Wrexham

Davies, who was previously married to Ann, is survived by second wife Judy as well as his three children, Gareth, Rhian and Bethan.

Swansea, one of his former clubs, tweeted on Wednesday: ‘Rest in peace, Dai Davies. Everyone at Swansea City send their deepest condolences to the family and friends of former Swans goalkeeper, Dai Davies, who sadly passed away following his battle with cancer. Once a Jack, always a Jack.’

A tweet from the Everton Former Players Foundation read: ‘Sad to report the passing of goalkeeper Dai Davies. Our thoughts go out to his family.’

Former Wales striker John Hartson, who worked alongside Davies in a later role as a media pundit, also tweeted his condolences.

‘I knew Dai very well he was always wanting to help you a real gentleman.. had some great times alongside Dai with @S4C and @sgorio RIP Legend.’

Sue Butler, S4C Sports Commissioner, said: “Dai Davies was a key member of the Sgorio team over many years. He was a dear friend to us all. A kind, warm man, who on-screen was a knowledgeable analyst of the game and never anything but candid with his views.

“Dai was highly respected in the football world and one of the best goalkeepers ever to play for Wales. We will miss him dearly. S4C extends our deepest sympathy to his family.”