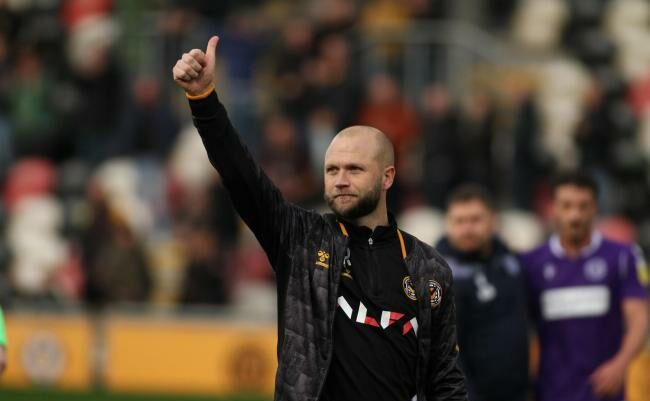 James Rowberry has won both of his two matches in charge of Newport so far.

New Newport County manager James Rowberry admitted his start to life as a manager has gone better than he could have dreamed of after a 5-0 home win over Stevenage maintained his 100 per cent record in the job.

After a 3-1 victory at Bristol Rovers in his first game in charge, Rowberry enjoyed a dominant display from his side in his first match in the dugout at Rodney Parade.

Dom Telford hit a hat-trick to take his tally for the season to 10 goals in 10 games, while long-range strikes from Courtney Baker-Richardson and Finn Azaz completed the rout.

“I think Dom will naturally get man of the match because he scored three goals but I was pleased for the whole team,” said Rowberry.

“I said to Robbie Willmott after the game that him in that holding midfield position was a masterclass when I look at it from a tactical and coaching viewpoint.

“Then the three young lads in front of him worked hard when we lost the ball to get it back and the back four, especially the two centre-halves, were immense with [goalkeeper] Joe Day leading.

What it’s all about 🧡

The gaffer and the players were quick to do autographs ✍️ and selfies 🤳 with fans after the final whistle yesterday 🖤 pic.twitter.com/orhiyGOfi5

“Then our front two got the goals, so it was really pleasing.”

The three points lifts Newport to eighth in the League Two table but Rowberry is staying grounded.

“I don’t feel it’s easy, I am just trying to stay in the moment and work on the things that I believe in and the staff believe in to move us forward.

“I probably didn’t expect a start like this, eight goals in two wins, but I am not getting carried away.

“We’ve got Morecambe next week [in the FA Cup] and I am already thinking about that and what we need to do to improve and move forward.”

A quick-fire double from Telford put the hosts in charge before the half-hour mark and he then teed up Baker-Richardson for the third on 34 minutes.

The best disallowed goal of the weekend goes to @NewportCounty 🍾

20 passes, starting with @CameronNorman95 regaining possession, to then laying it on a plate for @KEVIN11ELLISON pic.twitter.com/yQsU6jpgI8

And it was 5-0 within six minutes of the restart as Telford completed his hat-trick with a curler from the edge of the box and Azaz found the top corner from 20 yards out.

For Stevenage, it was another miserable away day after 3-0 defeats at Oldham Athletic and Northampton Town in recent weeks.

“It’s really tough to take,” said manager Alex Revell, who played for Cardiff under Russell Slade between 2015 and 2016.

“The performance was not good enough. It was unacceptable from start to finish.

“They gave away two terrible goals in the first 20 minutes and we were on a hiding to nothing.

“It’s happened again – for the third away game in a row – and you can’t accept that.

“Ultimately, I’m the manager so I have to take responsibility for it but it’s no reflection of the work we did all week.