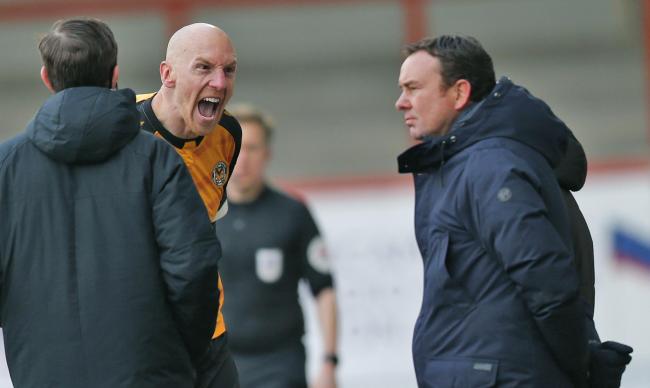 Kevin Ellison looks more like Ming the Merciless than Roy of the Rovers, but appearances can be deceptive.

Not even the old Roy himself could have written a script like the one currently being played out by the Newport County striker.

Ellison compared himself to the dark character of the Harry Potter films, Lord Voldemort, when he signed for the club.

His new manager, Michael Flynn, saw him more as a modern day Sir Stanley Matthews, given his longevity in the game, with the potential to become a hero to fellow 40-year-olds across the country.

But in truth, he was more like Yosser Hughes, from Alan Bleasdale’s TV series from the eighties, Boys from the Blackstuff, when he rocked up at Rodney Parade last summer.

Squeezed out at Morecambe after nine years of faithful service, as far as new boss Derek Adams was concerned, ‘Big Kev’ was past his sell-by date at 41.

He sent him off to train with the youth team and was more than pleased to see him go on his way when Flynn threw him a lifeline at County.

Born in Liverpool, you could see Ellison uttering the immortal words of Yosser Hughes – ‘Gis a job, I can do that’ – in trying to extend his playing career when he first talked to Flynn. He knew there was more in the tank and he has proved that in spades this season.

His magnificent 25-yard goal for County eight minutes after coming on as a replacement at The New Lawn on Sunday night sparked a much needed reaction from Newport that ended with them getting past Forest Green Rovers and into the League Two play-off final at Wembley.

The 5-4 aggregate win set-up another date with destiny for Ellison and his former boss Adams after Morecambe also won a place in the final.

The last time they met Ellison gave Adams a piece of his mind as he ran down the touchline past the home dug-out after scoring a crucial goal in a 3-1 win over Morecambe at The Globe Stadium.

Now, he wants to do the same again on Bank Holiday Monday when he believes it is written in the stars for him to steer Newport County in League One.

At 42 years and 82 days Ellison became the oldest outfield player to appear in a play-off game in County’s thrilling aggregate win.

He turned into one of three ‘super subs’ for County as he scored a screamer to launch a dramatic revival from 3-0 down.

“I’ve had people who have written me off year after year, but I’m standing here again proving the doubters wrong,” he said.

“If you look at August last year I was about to start in a factory doing shift work 9.00am-6.00pm, but here I am getting ready to go to Wembley.

“I’ve not got a point to prove against Morecambe. It isn’t going to be Kev Ellison against Derek Adams, it is all about the Newport team. I am going there and I think something else is written in the stars for me.

“I’m glad Morecambe got to Wembley. If I could have picked a team to play in the final it would have been them because of my past with them.

“I know they are going to fear me a bit like Newport did. That’s not an ego thing – I’m in their heads – and I hope that can play a part and take the pressure of our lads.

“I’ll get a bit of pressure and some stick, but if that helps the lads, so be it. I am going there to win for Newport County.”

After 391 appearances, 88 goals and a short period as manager at Morecambe between 2011-20, Ellison justifiably felt he deserved a chance to prove to Adams he had something to offer him when he took over as manager.

Instead,  the manager put him out to pasture. That led to Ellison making his feelings about him abundantly clear after he scored on his return.

“The way Derek Adams treated me was disrespectful. He disrespected me, I don’t like him, that’s how it goes,” said Ellison after that game.

“It was the way he went about saying things. If he had been honest enough, and man enough, to tell me ‘I don’t fancy you, you’re 41, go and find a club’, I’d have respected him for that.

“But he didn’t do that. He did things behind my back, but it came back to bite him. Newport County put food on the table for me and my kids, so that’s where my loyalties lie.”

So what happens if he takes a second bite out of the Scottish manager’s reputation next week? Ellison has plenty in mind.

“He will have been watching on Sunday thinking, ‘Oh no, not Kev Ellison.’ I think I’m in his head a little bit,” said Ellison.

“If that can play a part and spur us on to get a win, so be it. People will ask what I am going to do if I score. That would be nice, and I’ve got things in my head, but I’m not going to jinx myself.

“Let just say it could be interesting.”

There is little doubt he will get his first trip to Wembley for the play-off final given the impact he made off the bench at Forest Green. He has become one of Flynn’s secret weapons this season.

“They came out of the traps and got a two goal lead and then the gaffer brings on the old brigade and we changed the game luckily enough,” said Ellison, who overtook Kevin Phillips as the oldest goalscorer in a play-off match.

“All season the manager has said he has a game plan for me and that he’ll use me when and where I can. These are the games he brought me in for and hopefully I’ve paid him back.

“He’ll say it’s down to good management that three of his subs scored, but we reckon he’s lucky and it’s down to how good we are.”

Where Ellison led, Joss Labadie (30) and Nicky Maynard (34) followed suit as the game went into extra-time. Maynard’s strike in the 119th minute eventually carried County to Wembley for the second time in three seasons.

One of only two teams to beat Morecambe twice in the league this season – the other one was promoted Cambridge United – Newport finished one place, and five points, behind them in the table.

“My kids keep me motivated and it will be great to have 4,100 County fans supporting us at Wembley, playing their part,” he added.

“People keep on asking how long I’m going to go on for. If I was going to pick a game to end on, although I’m not going to do that, then it couldn’t be any better than Newport against Morecambe at Wembley.”