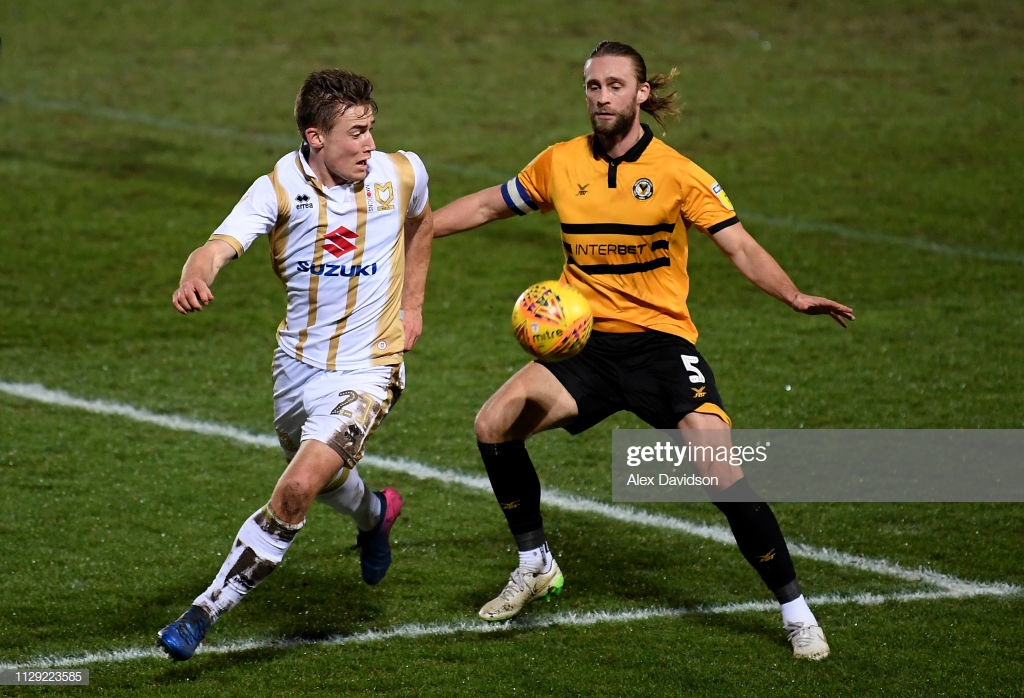 Amond and Matt have 37 goals between them this season and County team-mate Fraser Franks told iFollowExiles: “There isn’t a better partnership in our division.

“It’s outstanding. They have been key for us and the amount of assists they have provided for each other and the other boys in the team has been outstanding.

“Jamma and Podge have been in form all season.”

Matt scored twice during Newport’s 4-1 win at Notts County in midweek and set up Amond for his goal.

“Jamma scores all types of goals and his bicycle kick strike was a nice one. To be honest, though, I was more impressed with his assist for Padraig’s goal.

“I haven’t seen him do that as much and it was a good one.

“Robbie Willmott has hit form at the right time and if we can finish the season well, you never know what could happen.”

Matt tweeted: “Two goals, one assist, one tooth down, but a massive three points long overdue on the road.

“Great team performance. Congrats @padraigamond21 on his 20th of the season and @Fraserfranks on his goal.

“Thanks to those who travelled.”

“He bullied their defenders and Podge’s movement was excellent.

“They are a good partnership and we’re lucky to have them.

“Harry McKirdy when he came on didn’t give them a breath.

Newport travel to play fourth-placed MK Dons on Saturday and the Welsh visitors will be intent on putting the record straight after suffering a 1-0 home defeat at Rodney Parade against the same opposition.

“I’m scratching my head over how we didn’t win that game with the amount of chances we had,” says Franks.

“We had more chances against Milton Keynes, but we ended up scoring none and four against Notts County because we were clinical.

“It’s about being more clinical and picking up ugly points.

“The pitches are starting to cut up and you just need people to step up. That’s where some of our experienced heads come in and I have a good feeling about this stage of the season.

“I’ve played there [Stadium MK] a few times before and it is sort of a strange atmosphere, but it will be a good pitch.”

Franks, a 28-year-old London-born defender who started his career at Chelsea’s youth academy, scored his third goal of Newport’s League Two campaign when he netted at Notts County.

“I do like to pop up with goals and I seem to score quite a few against Notts County,” he says. “It’s been a tough month being injured and missing out on some of the big games.

“I still don’t feel 100% yet. It will take me a few more training sessions and games to get back up to my usual standards, but that will come.”

He is an England C international who earned promotion with Wimbledon, Welling and Luton, while he would love to add a fourth success to his CV.

Franks left Chelsea at the age of 16, but was invited back to mentor their young players.

Academy manager Neil Bath asked Franks to help with the kids of 15, 16 and 18, advising them what to do or not do.

“I talked to them about my own experience and, looking back, I was a nervous kid. I was a Chelsea fan and probably overwhelmed.

“The first team building is only 10 metres away from the Academy and the incentive is there, but 99 per cent of the kids won’t play for Chelsea.”

Flynn made one change to his starting line-up following the Emirates FA Cup defeat against Manchester City, slotting Franks into the back division.

Tyreeq Bakinson was the player to miss out and Flynn said: “Joe Day has made a great save at 4-1 with ten minutes to go and if that goes in then they may have had a bit of a flourish finish.

“Fraser (Franks), Mickey (Demetriou), O’B (Mark O’Brien), Regan (Poole) and Dan Butler were all solid, everyone single one of them.

“Matty Dolan did well when he went on. Overall, it was a great performance.”