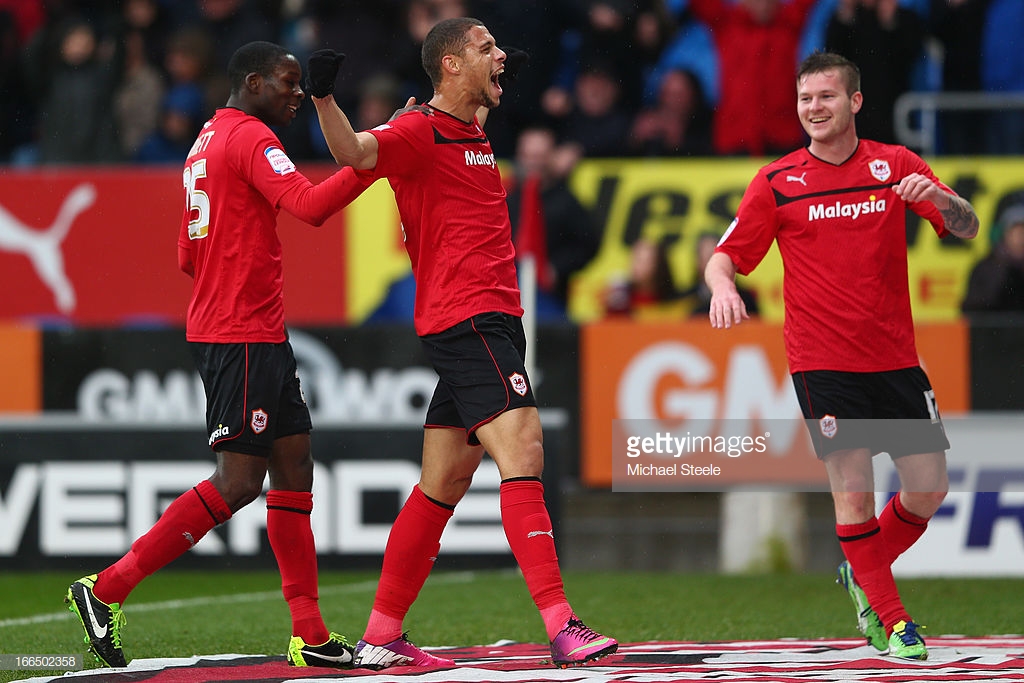 Northampton Town, who make the midweek trip to South Wales on Tuesday, have been rocked by the retirement of a former Bluebirds defender.

The Cobblers, who take on Newport County at Rodney Parade, are still coming to terms with thews that Leon Barnett has been advised to stop playing because of a heart condition.

Luton-born Barnett, 32, made eight appearances for Cardiff on loan from Norwich City during 2012-13, the season in which City won the title and earned promotion to the top flight.

Northampton manager Keith Curle says everybody at the club is ‘devastated’ by the news. Barnett has been told by medical experts that it is too much of a risk for him to continue training and playing as a professional.

“We knew something wasn’t right, so we sent him for further testing,” said Curle.

“It is sad news. Leon is not just a good player, but an important figure off the pitch, too. However, far more importantly for Leon and his family, is that this has been diagnosed now and he is fit and well.

“Our medical team made the correct decision to stop all activity, and after testing and second and third opinions, for his own health and safety, Leon has been advised to retire.”

Barnett has played in all four divisions of English football, in the Premier League for both West Bromwich Albion and Norwich City and also played in the Europa League for the Latics.

“Leon has enjoyed a fantastic career as a player, playing at all levels of the game to play over 350 senior games across the four divisions,” says Curle.

“As a club, we offer our full support to Leon and his family, we will honour his contract and will help them, however, we possibly can.”

Newport badly need a return to winning ways against Northampton, who drew 2-2 at home against Grimsby on Saturday and are 15th in the table.

“We allowed them to grow into the game and then we didn’t do the simple things with the quality that was needed and some of our passes and our options that we picked, there’s room for improvement.

“The players know they haven’t performed.”

Northampton have conceded seven goals in their last three League Two fixtures and Newport will hope for a return to winning ways after the disappointment of defeat at Cheltenham.”

The Exiles have dismissed rumours that Shrewsbury Town have moved to appoint Flynn as their new manager.

Both Flynn and Wrexham’s Sam Ricketts are among the favourites to replace former Shrews team boss John Askey, but County say: “The club can confirm that it has not received any formal approach from any other club.

“The club’s board has made known its intention to continue to support the manager in strengthening the squad in the January transfer window.

“Michael, his staff and players are focused on tomorrow night’s important Sky Bet League Two game with the visit of Northampton Town.”

Newport play Wrexham in the FA Cup on Saturday, but Flynn is focussed on the clash with Northampton.

“I’m not interested in the FA Cup – we’ve got Northampton first,” he said.

“I know I’ll get a reaction (v Northampton). I had a reaction from the players at half-time. I thought we were the better team in the second half.

“The positives were that Mark O’Brien and Andrew Crofts went on and played  45 minutes. Those two were superb when they came Flynn has pledged to make changes, saying: “I know I won’t be picking that team that I picked in the first half at Cheltenham, that’s for sure.”