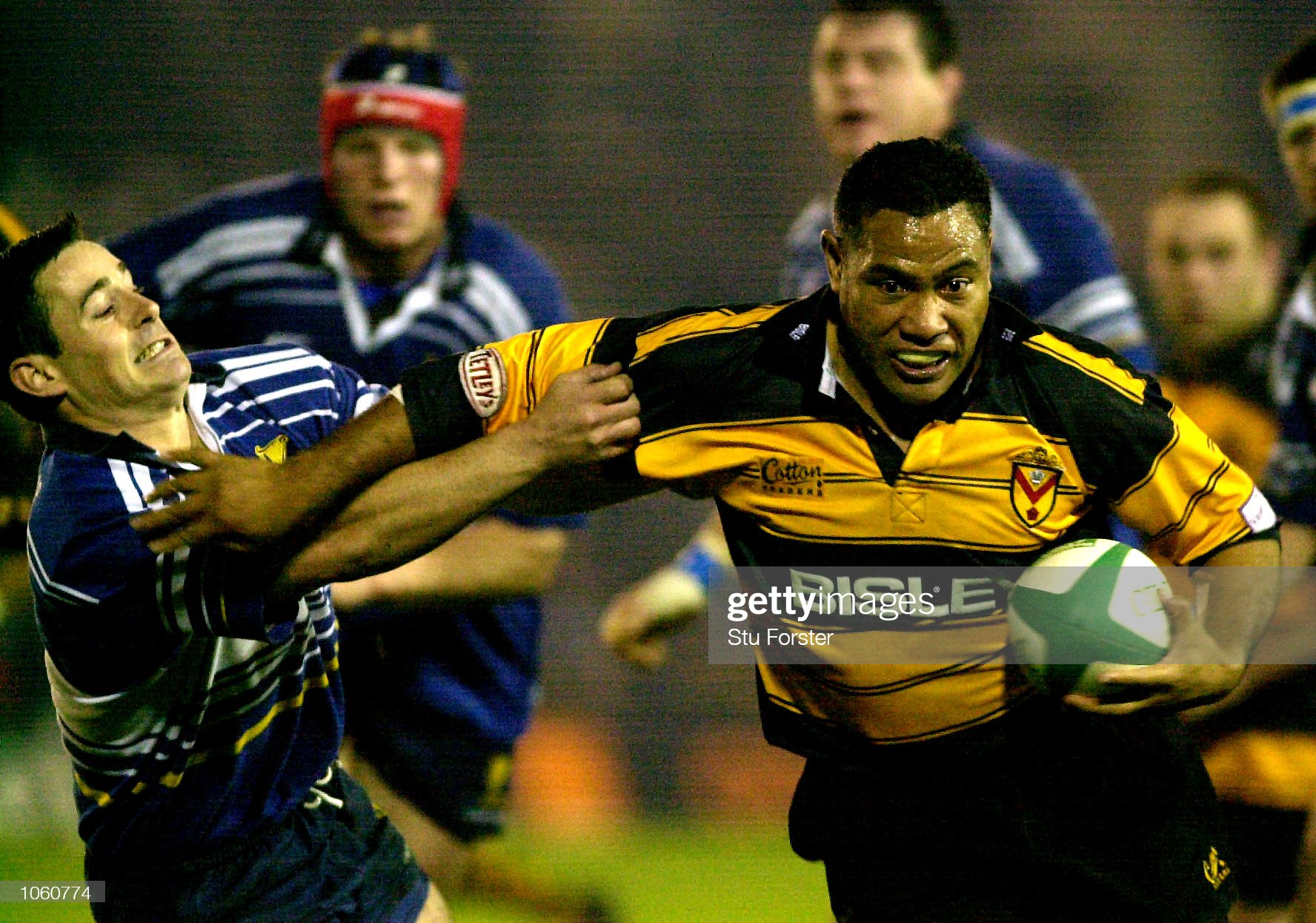 Way back in 2001 Newport were expected to sign legendary South African scrum-half Joost van der Westhuizen. But after much fanfare the deal fell through and the Black & Ambers were left with 12-cap All Black Ofisa Tonu’u  instead. He may have been second choice, but Tonu’u turned into a cult figure at Rodney Parade. Steffan Thomas tracked him down at his home in New Zealand and heard about an eventful two years in Wales.

Former All Blacks scrum-half Ofisa Tonu’u ranks his time playing for Newport among the best years of his career, but there’s one incident he’d rather forget.

Back in 2002 Tonu’u became a victim of racism in a Welsh Cup clash at Bonymaen with the Black & Ambers refusing to attend the post-match function.

Most of our conversation is upbeat and Tonu’u has nothing but praise for the people of Wales, in particular the Rodney Parade faithful.

But as we take a fond trip down memory lane, the Wellington-born player of Samoan descent is clearly still upset when he recalls the incident which occurred in 2001.

It also means he has nothing but support for ongoing attempts to highlight racism and bring about further change in all sport.

“I was called a gorilla by the Bonymaen prop in a Principality Cup game just as I was putting the ball into the scrum,” he says.

“It wasn’t nice at all and it really upset me because nobody should have to put up with that sort of thing.

“There was a bit of an enquiry afterwards and somebody got sanctioned.

“That was the first time I’d been under that sort of scrutiny but my teammates and the club supported me.

“It’s been well documented around the world what’s been going on.

“There’s been some terrible ones in football in Europe. I don’t stand for it and I hope nobody else does.

“I’m glad to see the united front and sport trying to stamp it out.

“A lot of people are misinformed and ignorant but I’m so glad there’s things in place to stamp such ugliness out of the sport.

“But I can’t speak highly enough of my time at Newport, from the administrators, players and supporters.”

But Tonu’u, who also played Test rugby for Samoa, insists his time in east Wales was something he thoroughly enjoyed.

In the current cash-strapped climate the chances of one of the four Welsh professional sides luring a top end southern hemisphere player to these shores is remote.

But at the turn of the century, signing front line All Blacks and Springboks was a regular event at Newport. Tonu’u was one of them – signed for the Black & Ambers who were then bankrolled at the time by local businessman Tony Brown.

Brown had pumped almost £10m of his own money into Newport with world stars such as South African duo Gary Teichmann, Percy Montgomery and Adrian Garvey along with Fiji international Simon Raiwalui arriving at Rodney Parade.

Newport saw off the Scarlets in this east-west clash at Rodney Parade, winning 24-9. The highly popular Ofisa Tonu’u on the front cover pic.twitter.com/PsF0MpGmf6

These days the signing of a 12-times capped All Blacks scrum-half would be met by much fanfare but it was not the case when Tonu’u rocked up in Newport with the expected signing of South African World Cup winning superstar Joost van der Westerhuizen having fallen through.

“I came in as a second choice because the original person who was supposed to sign for Newport was Joost van der Westhuizen,” recalls Tonu’u.

“They had a game on at Rodney Parade after what happened in New York that day. It was a dark evening.

“There was extra pressure because I was signed instead of Joost.

“There was a huge buzz around the place that he was coming but instead they got me.

“I was really excited to come and play and there was a good bunch of players there like Shane Howarth, Simon Raiwalui, Percy Montgomery and Andy Powell.

“We had a really strong side and even though we didn’t win any silverware while I was in Wales, we were always there or thereabouts.”

At the time Newport were coached by legendary former Springboks coach Ian McIntosh who had a reputation as a tough taskmaster.

McIntosh was often seen in the stands losing his mind over refereeing decisions but Tonu’u ranks him as one of the best coaches he’s played under.

“Before being coached by Ian McIntosh I’d always been against him whether that was playing against the Natal Sharks in the old Super 12 days, or the Springboks,” says Tonu’u.

“Watching him on TV you saw this image of his eyes about to pop out of his head as he was so angry with how the game was going.

“He was a really passionate man especially when it came to rugby and he was one of the best tactical coaches I’d worked under.

“I found him to be a lovely man. He was a caring coach and a player’s coach.

“He gave players the self-belief to go out and express themselves.

“He was also a real tough taskmaster. There were times when we needed a boot up the backside and he would be quite passionate with team talks in the changing rooms.

“At times we could nearly see steam coming out of his ears when things weren’t going well, but normally he was a gentle sort of coach.”

It is obvious how much Wales means to Tonu’u with a Newport jersey taking pride of place on the wall in his office alongside his All Blacks and Samoa jerseys.

During his time in Wales he experienced some of the best derbies Welsh rugby had to offer against the likes of Cardiff, Llanelli, Swansea and Neath.

But there was one Heineken Cup clash against Leinster in particular which stood out.

“Rodney Parade was a real special place with a packed crowd and the song ‘Who let the dogs out?’ blaring on the speakers as we ran out onto the pitch,” he says.

“I was so tribal at the time and the derbies against our big brothers up the road, Cardiff, and against the likes of Llanelli and Swansea, were brilliant.

“We played against Leinster in the Heineken Cup. We were just about to beat them and the lights went off at Rodney Parade.

“That’s when Ian McIntosh let it rip in the changing room. He was so pissed off about the whole thing because we had all the momentum and were just about to crack them.

“We came back out and eventually lost the game which meant we missed out on getting into the Heineken Cup quarter-finals. We’d already done a job on Toulouse so we were confident but our campaign quite literally turned to darkness.

“Somebody pulled a plug. There was a hot dog stand at the back of the stadium which short circuited all the stadium lights.”

Tonu’u was also part of a strong Pacific Islands presence in Welsh rugby at the time along with the likes of Salesi Finau, Kuli Faletau, Kati Tuipulotu and Dave Tiueti.

He has fond memories of future Wales international Taulupe Faletau as a kid along with England superstars Mako and Billy Vunipola.

Normally the lights cutting out in a game would be the craziest thing to happen but Tonu’u was also present when future South African World Cup winning full back Montgomery pushed over a referee.

He said: “There was a lot of big Tongan boys in Welsh rugby including Salesi Finau who played for Llanelli. Now he was a tough bugger to play against.

“I remember playing at Ebbw Vale and the Tuipulotu family invited me into their home after the game.

“I’m pretty sure Taulupe Faletau, Billy and Mako Vunipola were there after the game as kids.

“But Welsh rugby was such a tight knit community at the time and I had such a close relationship with Tony Brown who was so good to me during my time in Wales.

“I played in some crazy games when I played in Wales. I was playing in the game when Percy Montgomery got sent off for pushing the referee.

“When I saw that happen I ran over to him to push him away and I honestly thought he’d never play rugby again after that.

“After the opposition had scored a try Percy was protesting with the referee and he went over and pushed him.

“It was idiotic and I’d never seen anything like that before. Touching a ref is a point of no return but he ended up coming back and winning the World Cup.

“It was out of character because Percy was such a lovely guy off the field.”

Tonu’u had the opportunity to remain in Wales with the Dragons but opted to return to New Zealand after two enjoyable years.

But as our conversation draws to a close he makes it clear that Welsh rugby will always have a special place in his heart.

“I was in talks to stay on and maybe play for the Dragons,” says Tonu’u.

“But I think the time was right to move on. Me and my wife have always wanted to return to Wales at some point, though.

“Our daughter, Leilani-Grace Seren Tonu’u, was born in the Heath Hospital in Cardiff, so it would be great to show here where she was born.”