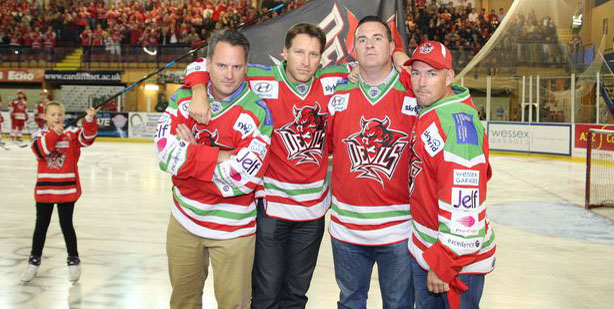 Steve King has unveiled Cardiff Devils final offensive signing for 2018-19 and says: “We have three first lines – one of the best set of forwards in ice hockey.”

The Cardiff Devils owner revealed Kontinental League veteran Charles Linglet as the club’s latest signing and confirmed that the Elite League champions have the most skilled and competitive team in the club’s 30-plus years history.

There is no question in my mind that the 2018-19 Devils will be an improvement on last season’s team, who won the League title and play-off championship.

It is also true that Sheffield Steelers, Belfast Giants, Nottingham Panthers and more will also be stronger and Devils are their target.

Well would you look at this. A year ago yesterday i was leaving for Minsk for the 17-18 season. This time, me and the fam are very excited to leave for #Wales. I cannot wait to join the @cardiffdevils for this upcoming season!

The new season has the makings of a phenomenal challenge when Cardiff aim to become the first club to win three successive League championships.

Cardiff still have one more signing to reveal and that will be a defenceman who is new to the club. The announcement is likely to be made at the opening training session next week.

Calgary-based King was in Zanzibar when he announced the latest signing live on Devils twitter feed.

They have 13 forwards who carry huge scoring potency and King is urging Devils fans to get behind their team from the start of this season, saying: “We have a ridiculous forward group and that speaks for where we are going as a club.

“There are three new players who have played at the highest levels. We have three first lines and that’s crazy.

“Look at our top nine! It’s insane. One of the best forward groups in hockey.”

King is keen to see Devils fans back their players 100 per cent in the new campaign and believes any positive power will help the team, saying: “I was disappointed in the negativity online and on social media last season.

“I felt it was taking a lot of the fun out of being a fan. Unfortunately social media negativity is a lot easier than positivity so I see this happen more and more often these days.

“I also heard from players who felt a change in the fan relationship and that’s an even bigger shame. Maybe our fans weren’t used to being defending champs. We’ll be used to it next season.”

No club has ever achieved a hat-trick of titles, but Devils are intent on achieving the triple crown.

King interrupted his holiday to talk about the arrival of Linglet – and paid tribute to fellow owner Kelly Hughes.

“Charles is a huge signing, really huge,” said King. “There are few times that a team can sign somebody with the hockey CV that he has.

“I tip my hat to Kelly, who recommended one of former former team-mates at Cornell to us, a player who had spent most of his career in the KHL.

“We tried to sign that guy for some time, but he is now hurt and is retiring, but he told us about the best player he has ever played with.

“He said it would make a ton of sense for him to sign for Cardiff Devils.

“Charles scored more than a point a game in the KHL three years ago. He is a legitimate star player at that level.

“He has had an injury problem over the last couple of seasons, but is now fully fit. Minsk were keen to sign Charles again,m but he is looking for something different.

“His family will come to Cardiff as well and he will be on the MBA programme at Cardiff Met University.

“There is no doubt Charles had a lot more money in his career than he is making in Cardiff, but he is keen to be part of our team.”

King confirmed that head coach Andrew Lord will not be playing again – unless there is an emergency – and says: “Lordo is a better coach than player. Sorry mate!

“Paul Crowder, who had a great season with us last season, and Patrick Asselin have moved on. Patrick was with us for two years and we won two League titles.

“Drew Paris, too, played a major part in our title triumph last season.”

The first match for Devils is at Nottingham Panthers on Saturday, August 11 with the return at Ice Arena Wales the following evening (Sunday, August 12).