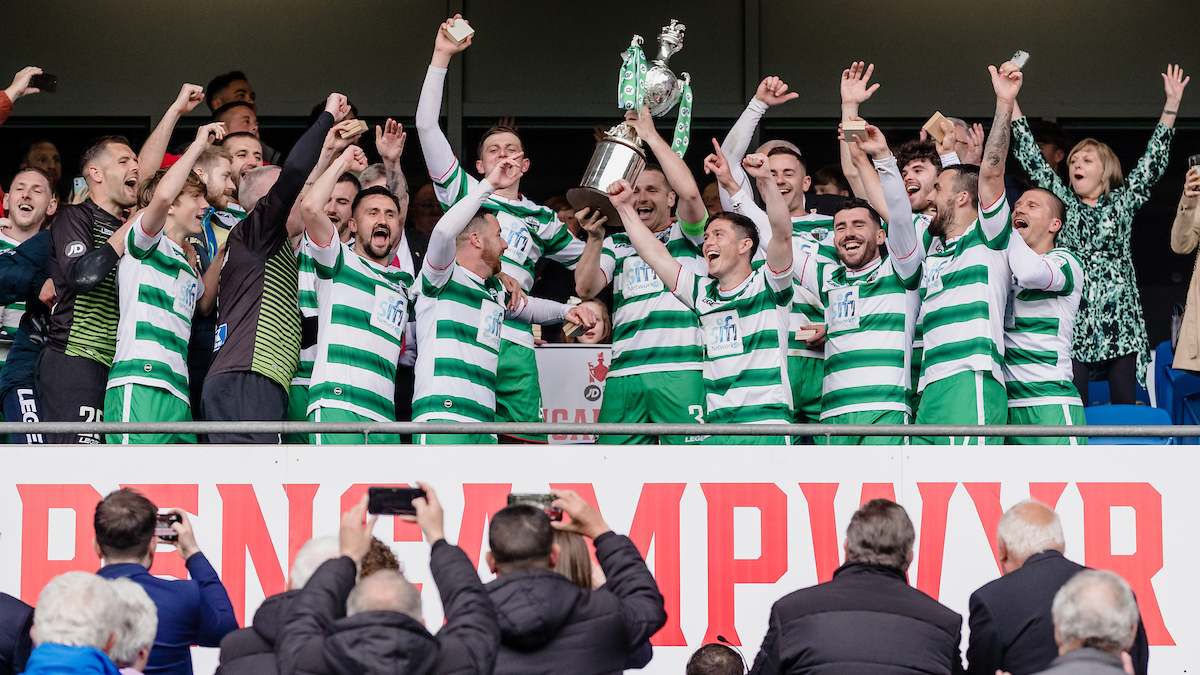 Officials and players of Newtown AFC would’ve been following events at Cardiff City Stadium yesterday with more than a passing interest as they witnessed a nervy finish as The New Saints successfully fended off Penybont’s valiant attempts of an audacious comeback.

Celebratory scenes at full-time confirmed Saints as worthy League and Cup double winners as the Welsh domestic season drew to a close – yet it was Newtown who arguably had most to celebrate.

The mid-Wales side finished their season third in the Cymru Premier table but were missing out on an automatic European qualification place, until The New Saints’ Welsh Cup victory was confirmed.

With the Oswestry club already assured of a route into Europe via the league, it was Newtown who became the grateful recipients of their Welsh Cup’s European spot.

The harsh reality for Penybont leaves them empty handed in a season which they pushed on two fronts to secure European qualification for the first time.

After all, they had spent much of the season competing with the likes of Newtown near the top of the table before falling short and missing out.

Their first ever Welsh Cup final appearance told a similar story. Penybont’s hopes seemed dead and buried when Declan McManus added to Jordan Williams’ first-half brace from the penalty spot to put The New Saints ahead by three goals with less than an hour played.

Penybont weren’t done however as Shaun McDonald and Dan Jefferies sparked what seemed an unlikely rousing late fightback in the final minutes before running out of time.

Despite having little in return from a season which could’ve been so much more, to label Penybont as ‘nearly-men’ would be unfair. And the feeling around the league is not so much that Rhys Griffiths’ side have fallen short, but are rather on a steady upward trajectory that has more to come.

Not that Newtown will care in the ever ruthless surroundings of the Welsh top-flight, of course. If The New Saints are the successful model of how a fully professional club should operate in the Cymru Premier, then Newtown, under Chris Hughes, are without doubt the blueprint for any middling Welsh domestic club.

A modest outfit in modest surroundings, the Robins will again reap the financial rewards of European money for a successive year competing in the UEFA Europa Conference League.

They will be joined by league runners-up Bala Town, who complete the trio of Welsh European entrants this summer.