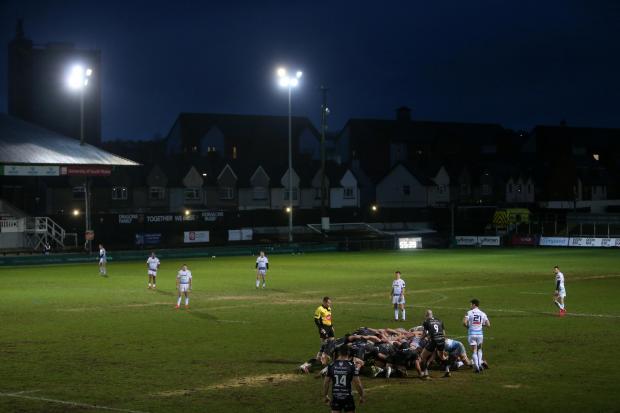 Cardiff Blues won an eerie and empty derby at a deserted Rodney Parade.

There was relief written all over the face of Cardiff Blues defence coach Richard Hodges after his side edged their way to a nail-biting 13-12 Christmas derby win over the Dragons at Rodney Parade.

If it wasn’t a Christmas cracker, there was enough tension to the end to keep everyone on the edge of their seats – especially in the Blues coaching box.

Hodges was wired up to head coach John Mulvihill, who had to miss the game because he was isolating due to a Covid-19 contact.

“Having been behind on the scoreboard until the 68th minute, we managed to get in front and so it’s a relief,” said Hodges.

“Conditions during the first half were terrible and the Dragons had the benefit of those. We hung tough, especially with the penalty count going against us early on.

“We problem-solved really well and dealt with the areas of the game where we were getting penalised – around the line-out and offside. I think the penalty count after 30 minutes was around 15-4 against them.

“Then it was down to an attritional battle up front. “Our pack got going, our maul got going and we got a couple of scrum penalties.”

Having lost five of their previous six matches in the Guiness Pro14 it was vital the Blues got back to winning ways in their Conference and it took a decisive try from Josh Turnbull to clinch it. That made it 11 wins in a row over their nearest and dearest rivals.

“We had five internationals on the bench who had the impact that we required because we took the lead in the 68th minute and, if I’m honest, we didn’t look like losing it from then,” added Hodges.

“I thought, as long as they didn’t go two scores ahead, that we’d be able to claw it back if we had the elements in the second half.

A Josh Turnbull try and the boot of Jarrod Evans helped Cardiff Blues battle to an 11th straight league win over Dragons. https://t.co/9mlzCS8NUn

“Obviously, in true Cardiff Blues form, we came back out for the second half and the wind and rain were gone and it was almost like an autumnal game.

“Tomos Williams came on and did well and Lloyd Williams was excellent in the first half with his kicking game off both feet.

“Defensively we managed to swallow them up quite well, but we just didn’t manage to get any territory or possession in the first half in those conditions.

“In the second half managed to do that and it was a good win in the end.”