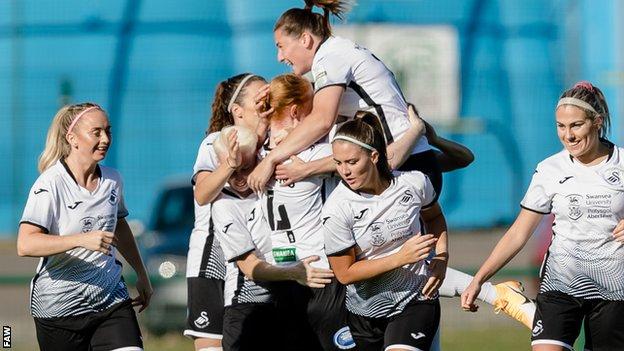 Women’s club football in Wales is being re-shaped. But as well as abandoning the old structures, other things have been dumped by the Football Association of Wales, too – such as fairness, integrity and respect. Fraser Watson suggests a re-think.

An elitist, power-fuelled proposal that threatens the very essence of league structure and competition.

Six weeks ago, such a theory was being directed, with no shortage of venom attached, towards the 12 clubs assigned to the soon to be defunct European Super League.

The accusations lingered on when assessing Barcelona, Juventus, or Real Madrid, three clubs who defiantly still leant against the bar long after the remaining guests had cut their losses, drunk up and gone home.

But even in a world where the term normal has long been confined to a distant concept, few envisaged that come June, here in Wales, we would be directing disdain at a misguided attempt to establish a hierarchy not at Florentino Perez and co, but those who run club women’s football in Wales.

The Football Association of Wales confirms the teams in Tier 1 and Tier 2 as part of a major re-structure of the women’s domestic game for the 2021/22 season.

Or in the case of the FAW, let slip that the Welsh Premier Women’s League would be streamlined from nine teams to eight, with three current sides relegated and two promoted via a criteria which had little to do with on-field merit.

In what is hardly a startling twist, the decision isn’t sitting well with newly-demoted Abergavenny – who ended the 2019/20 campaign fourth in the top tier – Caerphilly’s Cascade YC Women, or Briton Ferry Llansawel.

The decision to replace them with Barry Town United and The New Saints – a side actually in the process of reforming – essentially appears a judgement call based on names and idealism.

The fleeting attempt at justification following the announced reforms was as ambiguous as it was token.

Apparently, FIFA, those bastions of integrity, had advised the FAW throughout the process. The clubs we were told, had long been informed that places in a league that represents the pinnacle of a system’s sporting merit weren’t going to be decided on sporting merit.

The changes were heralded as a strategy to improve pathways “in the hope fewer drop out,” just as personnel involved in the unjustly demoted clubs were voicing fears over players now walking away.

And as a final, heart-warming gesture, came confirmation that the top tier would not be ring-fenced and promotion back into it would be available. How civil.

But in essence, it all amounts to a flawed attempt to create an attractive, elite top tier without of course, the grotesque financial backing that supplemented the much maligned ESL example.

Relegating teams without qualified reason, upgrading clubs based on history and let’s be honest here, the success of their male equivalents, disintegrates pathways in the female game as opposed to developing them.

It implies that esteemed names mean more than on field performance.

To reassure the football loving public perhaps @FAWales can publish how promotion and relegation will work next season in Tier 1 and 2……
We don’t want a second season where league tables and results count for nothing. #unfair#footballnotmoney

It dispels the notion that you must earn the right to compete with the best.

And, perhaps most critically in this situation, it demotivates players and coaches once they come to the realisation that a season of hard work and attaining results has been futile.

If TNS wish to reform they should of course be welcomed back – and made to fight through the leagues to get where their new investment and grand plans seemingly signify.

If promotion is in place for 2021/22, Barry Town United are perfectly capable of fighting for it.

And yet, you sense such rationality will fall on deaf ears. The three clubs being penalised have voiced their inevitable anger, others have pledged to stand by them, and social media discontent is already widespread.

But Abergavenny, Cascade YC, or Briton Ferry Llansawel don’t have Gary Neville ranting for them on Sky Sports.

They don’t have pundits leading an act of mass condemnation from powerful figures in the world game.

They don’t have large angry mobs of fans standing by to hold up team buses and get fixtures cancelled.

They don’t have the clout necessary to hold those in charge for ransom.

Recent history suggests the FAW will ignore the calls of injustice until the storm dies down. And should it arise again, they’ll ignore it some more.

And yet this own goal comes at a time when grassroots and semi-professional football, at all levels in Wales, finally had some positivity.

Mistakes were made during Covid-19, but the Premier 2020/21 campaigns for both men and women were at least played to completion – with no shortage of effort from authorities – and both received greater exposure than ever before.

For all those below, restrictions finally allow for training and friendly fixtures, with real hope that next season is shaping up to be a full one.

But at a time when calls for equality and respect for the women’s game are growing ever louder, here we are in Wales ultimately disrespecting it.

Women’s club football in Wales as a whole, however, has just tumbled back several more.

One thought on “No Fans’ Mass Protests, No Ranting Gary Neville . . . No Wonder The FAW Thought They Could Shaft Welsh Women’s Football”