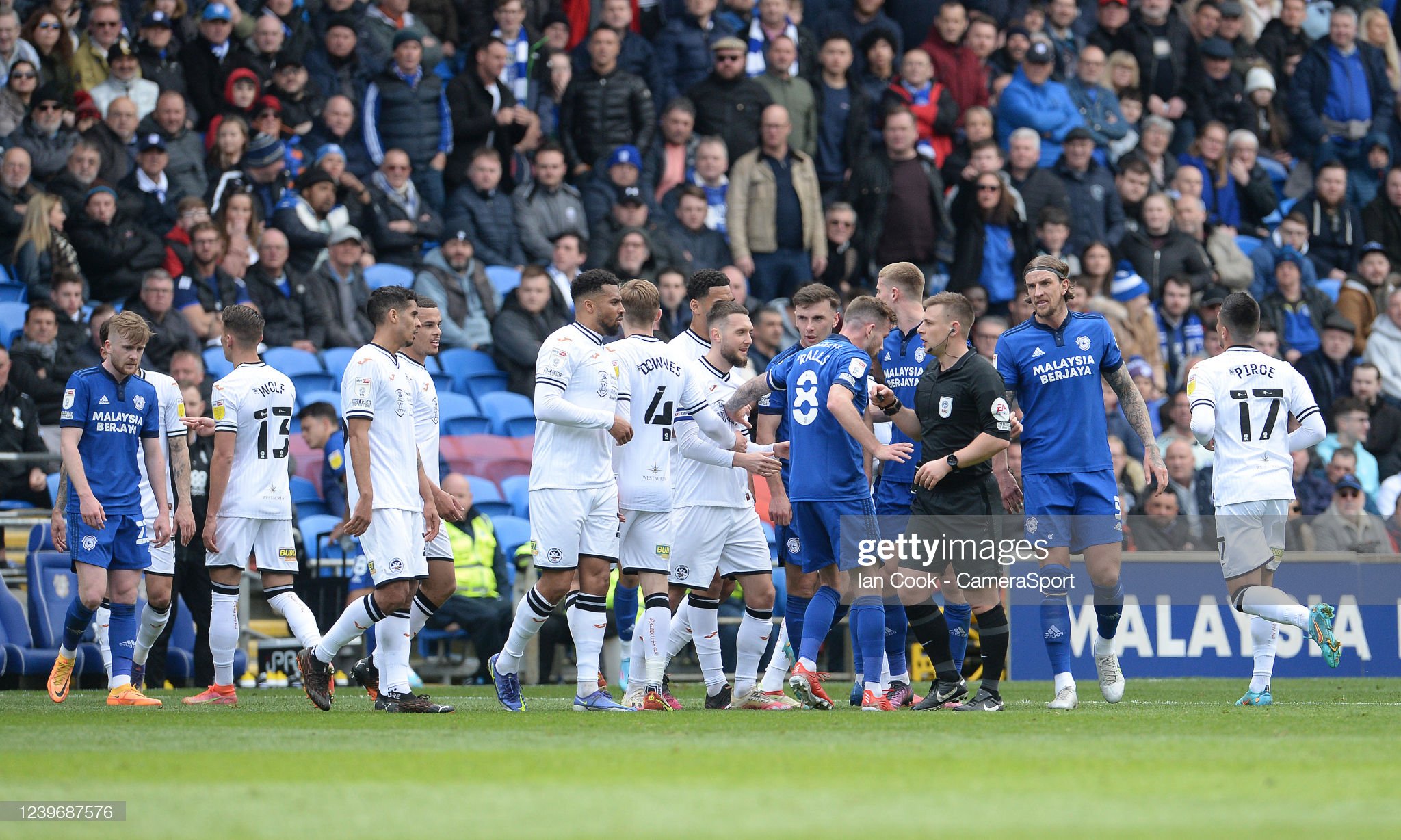 How might the Welsh sides shape up this year?

The 2021-22 season was far from a vintage year for any of Wales’ three Football League Clubs.

Swansea City fans had an historic derby double over rivals Cardiff to celebrate but little else; with Russell Martin’s side playing attractive football but ultimately unable to eke out any kind of consistency en route to a middling 15th place finish.

Cardiff City fared even worse (18th) and may well have been dragged into a much more jittery basement battle were it not for the points deductions divvied out to Derby and Reading.

Newport County arguably had the most promising season of Wales’ big three, with James Rowberry ably filling the void left by departing club legend Mike Flynn. It was a campaign that fizzled out though, with the Rodney Parade outfit suffering a late season slump in form that saw a League Two automatic promotion place – and then a play-off berth – fall frustratingly from their grasp.

Swansea, Cardiff and County fans will all be hoping for more than mid-table mediocrity this time around, but how are they shaping up ahead of this weekend’s unseasonably early kick-off?

Swansea have enjoyed a fairly settled summer in comparison to 2021, with no last-minute managerial changes to throw a spanner in their pre-season preparation this time around.

The Jack Army showed Russell Martin patience over the course of the 2021-22 campaign and largely bought into his playing philosophy, even if it yielded fewer points than Steve Cooper’s generally more pragmatic approach.

Whether that deep well of goodwill will eventually run dry is another question, though. Fans fell in love with the possession-based ‘Swansealona’ style of Martinez, Rodgers and Laudrup not just because it was easy on the eye, but a winning formula.

Only five teams conceded more goals than the Swans last term, so defence will need to be a priority this year.

An imminent return from injury for aspiring Wales World Cup squad member Ben Cabango should help soothe some nerves at the back, as will the arrival of Middlesbrough’s Nathan Wood and well-regarded MK Dons centre-half Harry Darling.

There could also be opportunities for Porthcawl product Brandon Cooper this season, with the 22 year-old having already caught the attention of national coach Rob Page.

Goals shouldn’t be in short supply either. The club have done well to retain the services of last season’s top scorer, the electric Dutchman Joël Piroe. Piroe will looking to build on his 22-goal haul last year, and will be on the radar of Netherlands boss Louis Van Gaal.

His likely Swansea.com Stadium strike partner Michael Obafemi has already taken to international football like a duck to water, bagging his first goal for the Republic of Ireland in their recent Nations League win over Scotland.

Both players will continue to cause opposition defences problems, as will utility forward Jamie Paterson.

The Swans’ midfield has also been bolstered significantly by one of the club’s most popular signings of recent years, with Joe Allen returning to south-west Wales after a decade-long sabbatical in Merseyside and the Potteries.

Wales’ best-known ethical chicken farmer will add quality, grit and finesse in the middle of the park, and should exponentially increase the Swans’ chances of edging the kinds of narrow encounters they fell short in last year.

Swansea will surely fancy their chances of ending this season closer to the play-off mix, and will have been encouraged by the likes of Luton and Huddersfield forging paths to the top six against the odds last season. They begin the new campaign with a stern but winnable test at newly-promoted Rotherham United.

There’s an argument that Steve Morison helped steady the ship when he took over the reins at Cardiff City last October.

There was certainly no repeat of the dire 8-game losing streak which saw his predecessor Mick McCarthy shown the exit door, and there were occasional glimpses of promise (the dramatic comeback away at Stoke, and unexpected wins against highflyers Nottingham Forest, Huddersfield and Luton).

The high points were few and far between though. Morison’s charges never looked like troubling the top half of the table, and lacked a clear goal threat post-Kieffer Moore: the fact that centre-back Aden Flint finished the season as the Bluebirds’ most prolific scorer speaks volumes.

There were also regular question marks around squad morale; not helped by Morison’s unhelpful public scapegoating of young players in defeat.

In truth, the emergence of homegrown youngsters into dependable regulars was one of the few success stories of the last campaign.

Welsh internationals Rubin Colwill and Mark Harris have come on leaps and bounds over the last 12 months, while Aberdare’s Isaak Davies already looks ready to push on to the next level. All three have a big season ahead.

It’s been an interesting summer break for Cardiff fans, with prolonged speculation around whether Gareth Bale would return to his hometown club in what would have represented the most extraordinary transfer coup in Championship history.

Ultimately though any glimpses of familiar man-buns or mysterious flashy cars in the Cardiff City Stadium car park proved to be false dawns, with the maestro (perhaps understandably) opting for Southern California over South Glamorgan.

Whilst Bale-less, Cardiff have brought in some talented players with points to prove. Winger Sheyi Ojo is back at the Cardiff City Stadium from Liverpool on a permanent basis; Romaine Sawyers – discarded by West Brom – will look to rejuvenate his career in South Wales; Gambian international Ebou Adams will seek to prove he can make the step up to the Championship after a stellar promotion year with Forest Green Rovers; and Irish midfielder Callum O’Dowda joins from rivals Bristol City.

The Bluebirds’ season gets off to a difficult start this weekend, with relegated Norwich City looking to set down an early marker as they bid to bounce back to the Premier League.

Cardiff’s fortunes against the Canaries – and in other challenging August fixtures against West Brom and Luton – should provide an indication of whether they are making progress.

Newport County are in a good place. Off the field, the supporter-owned club are sustainable and well-run – they were one of very few clubs in League Two to make a profit last season – and attendances have risen steadily over recent seasons.

On the pitch, the Gwent side are under the stewardship of one of the league’s most exciting young managers in James Rowberry.

So the question is, after four seasons of teetering on the fringes of promotion – including two agonising play-off final defeats in 2019 and 2021 – are the club now ready to make the step up to League One?

County’s lack of consistency cost them dearly last season, as did a sharp drop in home form towards the end of the campaign.

Rodney Parade will need to become a fortress again this year, and Newport will need to embrace the pressure that comes with being seen as contenders rather than succumbing to it.

Rowberry has added depth to the ranks over the summer by recruiting experienced duo James Wildig and Omar Bogle from Morecambe and Hartlepool respectively, as well as talented Welsh youngsters Sam Bowen (son of former County winger Jason) and Will Evans, who had impressed at Bala Town.

It remains to be seen whether Evans will make the climb up to League Two successfully, although the quality Torfaen-born James Waite has shown since arriving at Rodney Parade from fellow Cymru Premier side Penybont provides an encouraging precedent.

Mickey Demetriou & Matt Dolan at the club shop for our 22/23 Away kit launch! Come down and check It out! #NCAFC 🧡🖤 pic.twitter.com/zWrkiMOvES

The loss of diminutive frontman Dominic Telford – the source of 26 goals last season – will be a harder gap to plug.

There will be huge pressure on homegrown striker Lewis Collins, Bogle and fellow new arrivals Chanka Zimba and Offrande ‘Oz’ Zanzala to find the back of the net regularly in his place – much hinges on whether one or more of them can do so.

Crucially, County have retained the services of talismanic defender Mickey Demetriou and the versatile Matt Dolan, one of the division’s set-piece experts.

The club also have two of League Two’s best goalkeepers in their ranks in Joe Day and Antigua and Barbuda international Nick Townsend. Their battle for the number one jersey will continue to provide a happy dilemma for Rowberry.

County will aim to open their account for the season on the road to Sutton United this weekend.

That trip is followed by a series of intriguing ties in August; including Michael Flynn’s return to Rodney Parade with Walsall, a trip to West Yorkshire to face Mark Hughes’ Bradford City, and challenging clashes with Tranmere, Salford and Exeter.

Fans will hope that this is year the club break a 35-year duck and secure a cherished return to the Football League’s third tier.