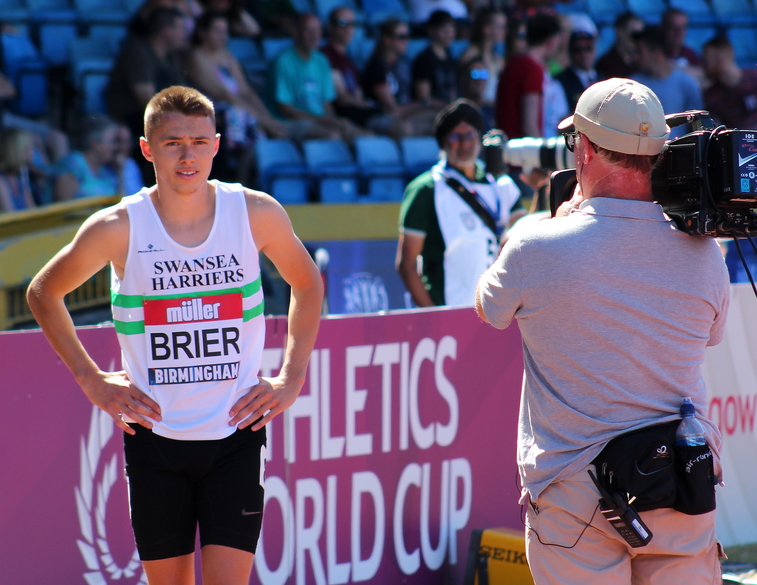 The Welsh athlete whose selection for the World Junior Championship in Finland came as a complete surprise, will leave the event with a bronze medal in his luggage.

Before the championships, Swansea Harrier Joe Brier admitted he had forgotten the team was being announced when he got the call telling him he had been selected for the Great Britain 4x400m squad.

But on Sunday, he helped his team-mates claim a bronze medal in the last event of the championship.

The GB team had reached the final by setting a new world lead time of 3:07.17 to win their heat.

On Sunday, they bettered that time to clock a season’s best of 3:05.64 to claim third place behind surprise winners Italy and the USA.

The USA had gone into the final with the fastest qualifying time of 3:05.57 – beating the world lead set earlier by the GB team.

And in the final it was the US who led after 400 metres. By the half way mark, it was the strong Belgium team which held the lead.

But perhaps the surprise package of the final, Italy were in front going into the final leg, and it was they who took the gold in yet another world lead time of 3:04.05.

The USA claimed silver in 3:05.26 with the Great Britain team of Alex Haydock-Wilson, Brier, Alistair Chalmers and Alex Knibbs grabbing bronze by just 0.01 of a second ahead of France.

After the race Brier said: “I just wanted to get to the break first get ahead and control the race really and I feel like I managed that OK and I’ve come out of it with a bronze medal.”

Brier’s coach Matt Elias, who was a 400m relay medallist in the Commonwealth Games and European Championships, tweeted after the race: “Awesome team work from these guys as well as Ellis Greatrix who ran in the heats!

“Keeping GB’s 4x400m tradition alive and kicking with a World Championship Bronze Medal Congratulations to all athletes and coaches involved.”

It was quite a weekend for the Brier family as big sister Hannah won the 100m title at the Welsh Athletics Championship in Cardiff on Saturday.

The bronze medal won by her brother and his team brought Britain’s medal tally at the World Junior Championships to seven.