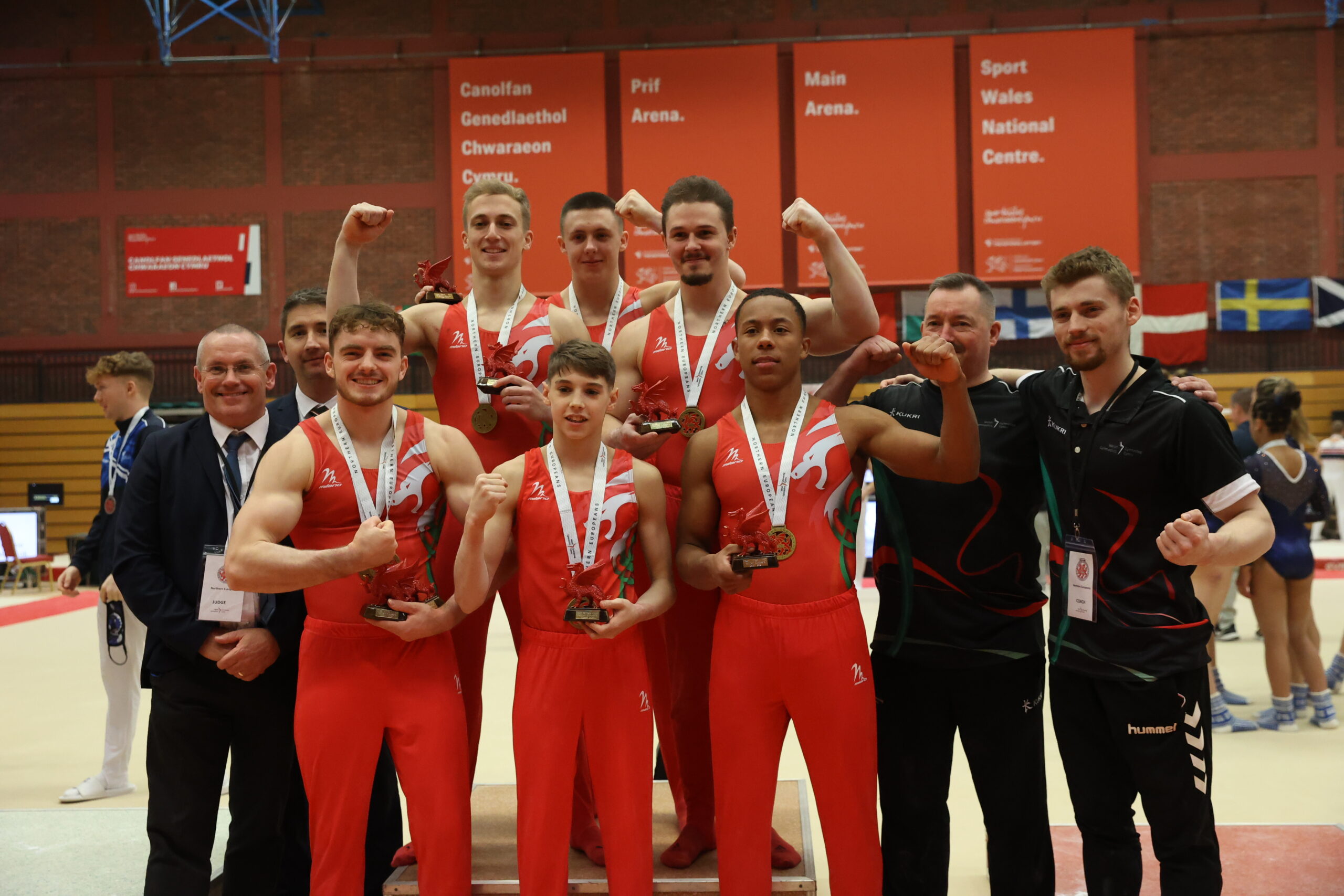 A gold medal for the Wales men’s artistic team and individual all-around gold for man of the moment Joe Cemlyn-Jones were the highlights of a memorable two days of Northern Europeans action in Cardiff.

It saw the team go one better than their silver medal at the last Northern Europeans in 2019, while it also secured a first gold medal for the Wales men’s team at this event since 2011.

Also going one better was City of Birmingham’s Cemlyn-Jones – second in the individual all-around in 2019. He took the honours with a total score of 80.750, ahead of Scotland’s Cameron Lynn (79.650) and 15-year-old Niscoveanu (78.700) – who was rewarded with a bronze after a stunning all-around performance.

The medals then continued to roll in on Sunday in the apparatus finals. Cemlyn-Jones took two more golds, on floor and the pommel horse respectively, to complete a golden individual treble – while also claimed bronze on the parallel bars.

Brinn Bevan (South Essex Gymnastics Club), the reigning British champion on parallel bars, added the Northern European title on that apparatus to his long list of achievements, with Benji Eyre (Loughborough Students) bagging himself a bronze medal on high bar.

In the women’s competition, Swansea’s Holly Jones matched her second place on vault from this event in 2019 with another silver medal.

“Obviously the team was the priority – and we’ve won the team event which is fantastic.

“Joe Cemlyn-Jones winning the all-around is also a fantastic result and to get finals and medals on most of the apparatus is great.”

Haysham also reserved special praise for Niscoveanu, who hails from Penarth but trains at South Essex Gymnastics Club and the sky looks to be the limit.

“The boy is a phenomenal talent,” said Haysham on Niscoveanu – who is still too young to be considered for the Commonwealth Games.

“If he was of age, he’d be in contention for this team for the Commonwealth. Unfortunately, he’s not, but he’ll have his time; 2026 will be Alex’s time.”

One gymnast who is in contention for Birmingham 2022 is Cemlyn-Jones, who has enjoyed a superb year.

This latest success follows on from his four individual medals, including silver in the all-around, at the Men’s British Championships in Cardiff back in September – which helped earn him Great Britain selection for the Artistic World Championships in Japan.

“It’s been an incredible year,” he said.

“It just fills me with confidence that I’ve got the numbers in the bags with the routines, it just shows that I’m ready for next year – and it’s going to be a big year.

“As a team we were going for the gold medal and the all-around title coming into this event – and that’s what we did.

“It was a great job from the team and everyone, a great atmosphere and we produced the results. Then to win the gold medal on the floor and pommel horse and bronze on the parallel bars, I’m just over the moon, really happy with it.”

There was also Welsh representation in two other apparatus finals, with Emil Barber (Swansea Gymnastics Centre) 4th on vault and Niscoveanu 8th on rings respectively.

Welsh gymnasts made up four of the top five placings in the individual all-around on Saturday, with Bevan in 4th and Eyre 5th.

Meanwhile Holly Jones, back competing for the first time for almost two years due to the pandemic, put down a marker for the Women’s Artistic British Championships taking place at this end of this month with a silver medal on vault.

“I was pleased considering this is my first competition back in two years,” said Jones, who had qualified in sixth.

“I did my harder first vault today as well and I haven’t competed that in two years either. I didn’t do it yesterday because I just wanted to do a clean vault and if I made finals today, which I did, I was going to go for it – and it paid off.

“This was a good first competition to get back into the flow and just keep getting better. I didn’t put any pressure on myself to get a medal, I just wanted to come and do everything I’ve been training.”

England, making their first Northern Europeans appearance in the 20-year history of the competition, took the women’s team title with Norway, in second, and Finland, third.

Tara Donnelly (Isle of Man) on floor, Megan Bridge (England) on beam and Iida Haapala (Finland) on uneven bars were the other women’s individual apparatus champions.

Full results from the 2021 Northern Europeans are available via gymdata.co.uk