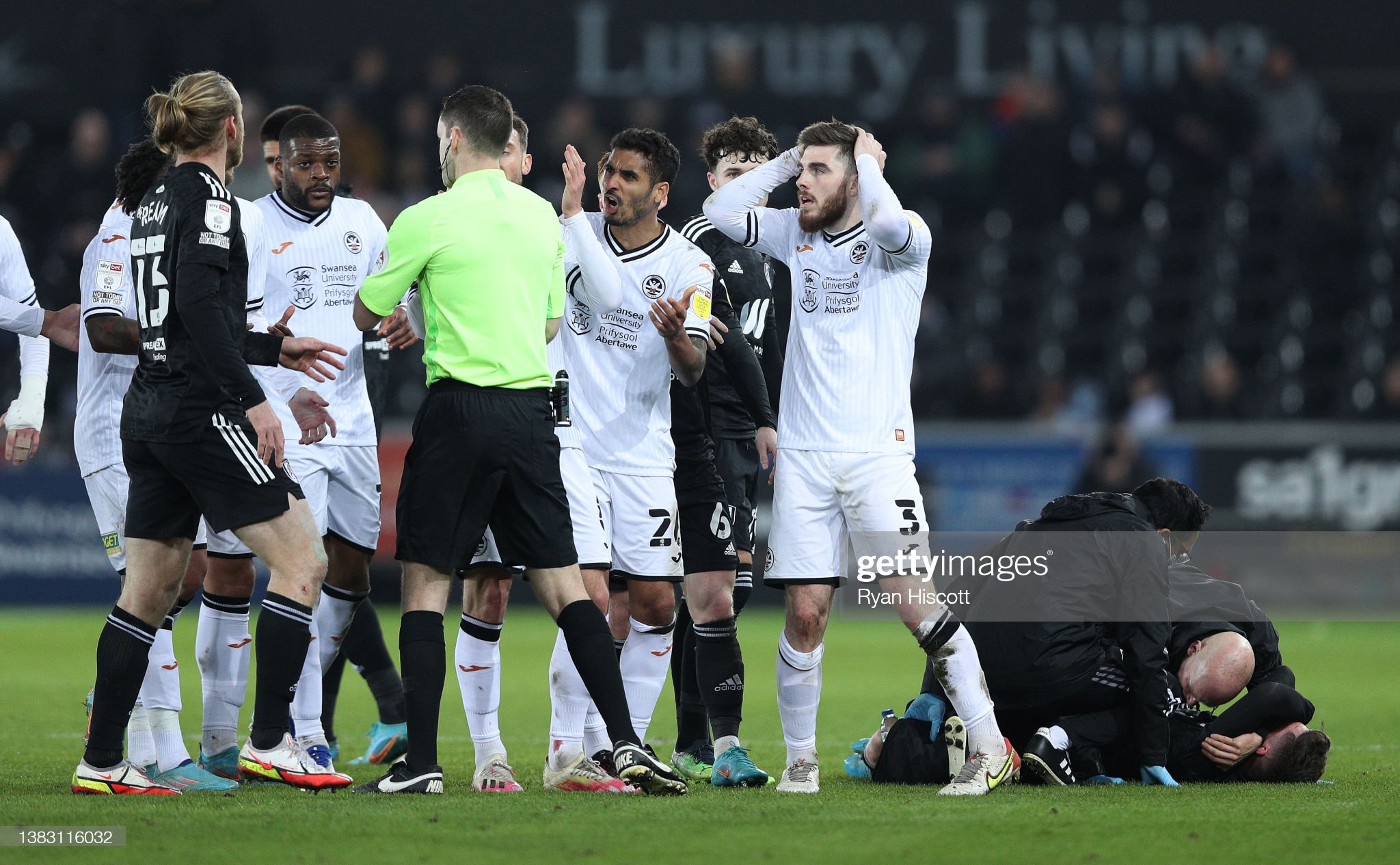 Fulham boss Marco Silva has told Swansea City the justification for Ryan Manning’s red card is evident in the wound on the leg of Wales star Harry Wilson.

Manning was sent off for a tackle on Fulham’s Wilson in the 42nd minute of Tuesday night’s home 5-1 thrashing for the Swans.

The score was goalless at the time and as well as disputing that the challenge was worthy of a straight red card, Swans head coach Russell Martin also claimed the dismissal ruined what had been an even contest up to that point.

But Silva has claimed the marks on Wilson’s leg prove the decision was the right one, even though the Wales international was able to play on for the remainder of the game.

“In that moment, if you ask me, if I thought it was a red card, I have to say no,” said Silva, whose table-toppers are now a massive 14 points clear of the rest at the summit of the Championship.

An excellent first-half performance from the Swans soured by Ryan Manning 42nd minute dismissal that completely changes the complexion of the game.

Russell Martin needing to re-write his half-time plans following a promising display from his team.

“I didn’t see the broadcast image. In the first moment I thought it would be yellow. Maybe it’s not a red card, but 15 minutes earlier it’s a clear penalty. He (referee Jarred Gillett) made a mistake there as well, but it’s all part of the game.

Martin saw the challenge differently and confirmed Swansea will appeal the decision with Manning – who was sent off only a month ago against Blackburn Rovers – now facing a four-match ban.

“It wasn’t two-footed and it’s not a lunge,” said Martin, whose team fell apart in the second half as they conceded five goals in the space of 39 minutes.

“He was on the stretch, but it is really difficult when players are running at full speed. It is not clear enough for me.

“We will appeal because he will get four games because he has been sent off before. I’m just really disappointed that such a good game of football was ruined.”

But Martin was also conceded that his team reacted badly to going down to 10 men. The first goal they conceded, in particular, was a shambolic one which set the tone for the remainder of the second half.

“Our game management, especially in the first 10 minutes of the second half, totally killed us and we have to learn from that,” added Martin.

“They are a brilliant group of young men and they gave us everything tonight. Unfortunately we were playing with 10 men against a very good team who are going up to the Premier League.”

🗣️ “The red card is the most important factor of the night. It has totally changed the game.”

Russell Martin felt referee Jarred Gillett made the wrong decision in sending off Ryan Manning, and that the red card had ruined the game as a spectacle.

The visitors had been forced to be patient as Russell Martin’s men enjoyed 65 per cent possession in the opening 10 minutes.

But the defining moment of the first half came when Swans captain Manning received his marching orders.

The Republic of Ireland full-back had had an earlier run-in in the opening exchanges with Wilson and when he lunged full length at the Wales winger just inside the Fulham half, referee Jarred Gillett had no hesitation in immediately brandishing his red card and any chance Swansea had of making it three wins in a row evaporated.

“It is really tough in this competition with two games in three days. We scored some nice goals, which is good to see, and it is a really important three points after a fantastic win on Saturday.

“We did our job well, which is the main thing.”

Fulham are now away to strugglers Barnsley on Saturday, whilst the Swansea face a trip to mid-table Blackpool.