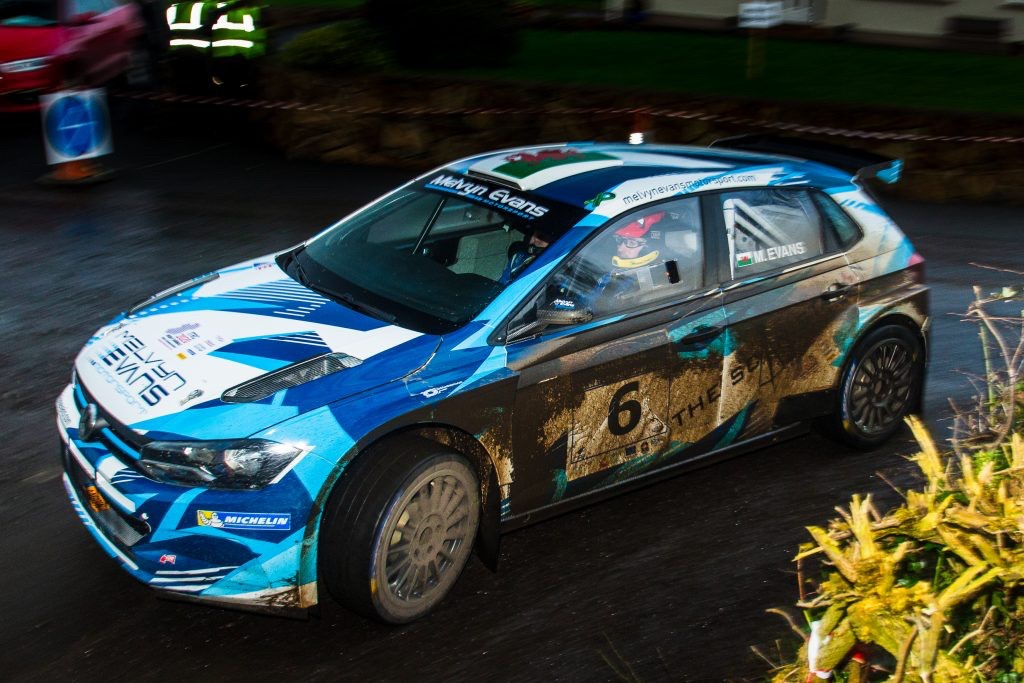 He hasn’t contested a rally for eight months, but now Meirion Evans’ unplanned enforced break will come to an end when he contests the Aarova Rally in Belgium later this month.

The 25-year old Llandovery-based driver was all set to challenge for the Irish Tarmac Rally Championship title this year – but Covid-19 restrictions saw the series cancelled after he had finished fourth on the opening round, the Galway International Rally.

Since then, Evans has only conducted some high-speed demonstration runs at the Race Retro event at Stoneleigh Park in Warwickshire, and more recently gave the new The Scan Station-backed Volkswagen Polo GTI R5 that he will drive in Belgium the very briefest of shakedown tests in west Wales.

Returning to full blown competition after such a long lay-off won’t be easy.

His third start in Belgium – and his first for three years – won’t be made any easier either by the fact that his regular co-driver, Jonathan Jackson, is unable to contest the event.

So, for the first time in seven years, Evans will share the car with somebody else; and he’s drafted in the experienced navigator Michael Gilbey for the Aarova Rally.

Fingers crossed we will be back in action next weekend! 🤩🤞
We will join the @OfficialBRC for the second round of their Championship on the Aarova Rally in Oudenaarde 🇧🇪
It’ll be nice to drive again!https://t.co/4ZnrsXKa3Q pic.twitter.com/smGIiEQIz1

“I haven’t competed in a rally for over eight months now, so I didn’t want to go into another winter break without doing an event or two and then face starting the 2021 season having been out of the car for over a year,” said Evans.

“We were hoping rallying would restart in some shape or form at home or in Ireland, and we have also been monitoring the situation very closely further afield.

“It’s difficult to plan too far ahead, but it looks like we’re finally good to go to the Aarova Rally.

“It’s only a 60-mile one day event, so we’ll keep within our own team bubble as much as we can and spend as little time out of the UK as possible.

“For once, I won’t be too bothered about a result. We obviously want to do the best we can, you always do, but it’s more a case of shaking off the cobwebs and starting our preparation for what we hope will be a full season in 2021.

“The Aarova Rally will only be my third rally in Belgium and my first in a R5 car, so the aim will be to complete all the stage miles and get to the finish.

We’re back 🤩 After almost 6 months, I can’t tell you how good it was to get back behind the wheel of my @volkswagenms #pologtir5 today😍 Hopefully the next rally is not too far away 🤞🤞#rally #volkswagen #polo #r5 #vw #gti #michelin #test #goodtobeback #thescanstation pic.twitter.com/Q7xNSfCzBZ

“After all, I’ll be racing against guys who are battling for the FIA European Rally Trophy and the Belgian Rally Championship titles, so they’ll be pushing hard right from the start, and that’s not a fight that we’re involved in.

“That said, we’re not going to Belgium to drive slowly – so we’ll be experimenting with the new car’s set-up and seeing just how close we can get to the best local drivers, without taking any risks.

“After such a long time, I’m just happy to be getting back out in a rally car. The first couple of stage miles might feel a bit strange, but I’m confident I’ll be able to remember what to do!”

The Aarova Rally takes place on Sunday 11 October and is based in the East Flanders town of Oudenaarde, which is best known for its Oud Bruin (Old Brown) beer, made by the famous Liefmans Brewery.