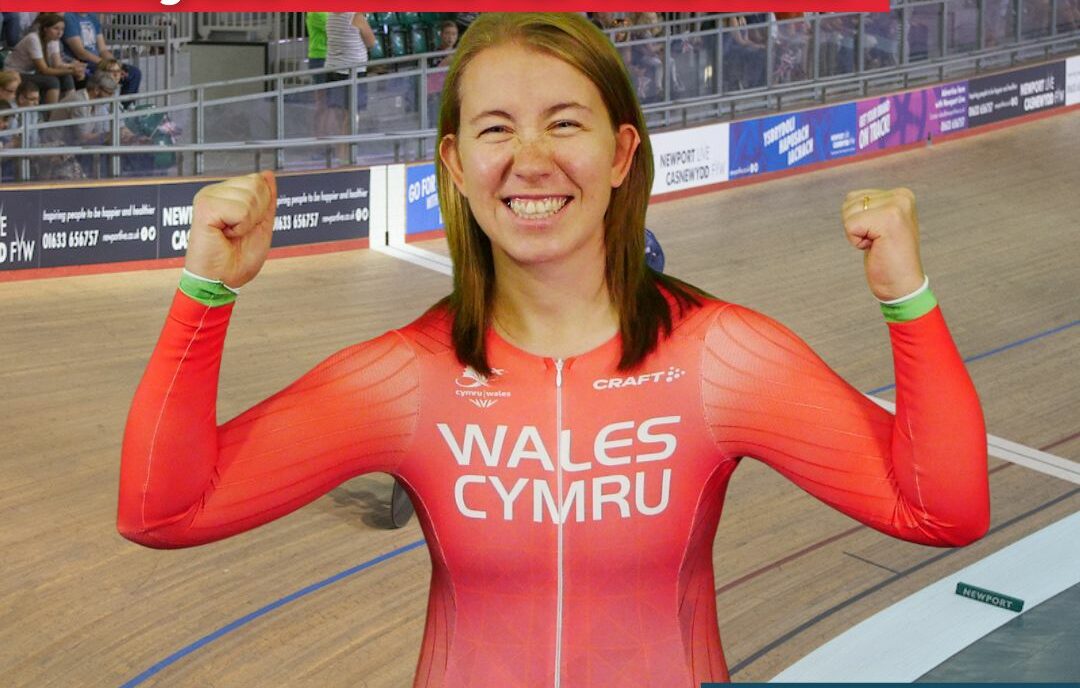 Nia Holt is racing for Wales at the Commonwealth Games.

Nia Holt thought she had left her bike racing days behind her.

But after a 10-year hiatus, which included raising a family, she is set to compete at the Commonwealth Games just a year after getting back in the saddle.

For Nia, that means juggling her time between training and spending time with her young family.

But after being away for so long from the activity she loved, the 28-year-old is delighted she found room in her life again for sport.

Carmarthenshire-born Holt began cycling from an early age, before joining Towy Riders Club in Carmarthen when she was 13.

It was at the famous velodrome in Carmarthen Park that Holt fell in love with the sport.

At 17, her vision started to deteriorate. Fortunately, she found a disability programme in Newport.

She later put the bike down and started a family with her partner, Adam Holt.

That family is cycling-mad, and so it was no surprise to many that she returned to racing. A shock to a few, perhaps, that she quickly made the Team Wales squad for the para cycling in Birmingham.

The 2022 Commonwealth Games are here 🙌🏴󠁧󠁢󠁷󠁬󠁳󠁿

We are so excited to see Welsh athletes perform on the track today!

Here’s who is racing throughout day 1️⃣

Stay tuned to digital platforms across the day for updates! pic.twitter.com/0VOOcWUpHq

Holt will be competing in the Tandem B event with pilot Amy Cole.

“I had kind of left the bike behind,” she says.

“I got pregnant and it was probably one of those things where I said to myself, I’m probably not going to get back on the bike now.

“Yet here I am today. We raised our kids, and we tried that chapter. I’d lost more eyesight at that point, and I was just thinking about what I was going to do for myself.

“It was hard at first because I was unfit. But I jumped back on the bike, and it all came back to me.

“I was just really enjoying being back on the bike and having fun. Then all of a sudden, I realised I had a chance to go to the Commonwealth Games, so I just thought, ‘let’s do that!’”

“It has been hard juggling family life with training. My husband, Adam, has also recently got a job with Welsh Cycling as a journalist, so he’s pretty flat out as well.”

Welsh Cycling will be celebrating their 50th anniversary in September 2023🤩

Please contact ellie.davies@welshcycling.co.uk with any Welsh Championships results and stories since 1973 across all disciplines.

See below for more information👇 pic.twitter.com/yUU2FLyPFT

Holt would be the first person to tell you that a year or two ago she was not expecting to be competing at a major tournament such as the Commonwealth Games.

Being only a year back into cycling, she has achieved an awful lot.

While she has defied some predictions to get to this position, she is just focussed on taking in the occasion and enjoying herself.

“It was bittersweet because it was something I didn’t think I was able to carry on doing.

“Obviously, trying tandem was pretty cool because it was something I loved, and I couldn’t believe I could do it as a career.

“The relationship with a pilot has to be a really good one. I don’t think it would work too well otherwise. Amy is my co-pilot, and she is brilliant. We get on so well, so that has been great.”

You could say the family are pretty well connected with cycling, with Holt’s brother-in-law being Joe Holt, who is also competing for Team Wales at the Commonwealth Games in the team pursuit, points and scratch race.

The key to her return has been the sheer joy Nia takes from sharing sporting activity with her family.

The action is coming thick and fast here in Newport as Amy Coles and Nia Holt take a silver in the para tandem 🙌#TrackChamps pic.twitter.com/R30MLxQSSi

“There is more of a reason now to be enjoying it. I am riding for my kids as well – for them to see that being visually impaired isn’t the end of the world.

“I am definitely enjoying it more this time.  There’s a great group of people. It has been brilliant.

“Last year, my daughter was diagnosed with the same condition as me.

“Her eyesight is perfect right now, but she could be visually impaired. She knows as much as she can, but it is important for me to show her she can do anything she wants to do if she puts her mind to it.

“That being said, she is definitely more excited to go and stay in a hotel, than watch me, but she’ll be there cheering me on!

“It’s amazing to have the family there. It will be such a special moment.

“Joe Holt is my brother-in-law, so family barbecues are just ‘bikes, bikes, bikes’. It’s really cool. He has been great and has helped us a lot and he is flying at the moment, doing so well.

“He is definitely the fun uncle; the kids are loving going on training rides with him.”

Put your hands together for the podium of the women’s para kilo TT:

As for her own chances of success, she says: “I am keeping my expectations open.

“There’s such a high standard, what will be will be. I am just looking to enjoy myself and the occasion. It is such a special moment.

“This time last year I wasn’t even back on the bike, so being where I am now is incredible.

“Being amongst all these incredible athletes competing is just surreal. It’s hard to put it into words.

“It’s crazy –  a dream come true. It’s something you only dream about – representing Wales. I didn’t think I’d be doing this 10 years ago, but everything happens for a reason.

“I remember as a kid watching the Commonwealth Games. It is a huge thing, and it is exciting to watch. Hopefully we can help the next generation aspire to where we are now.”