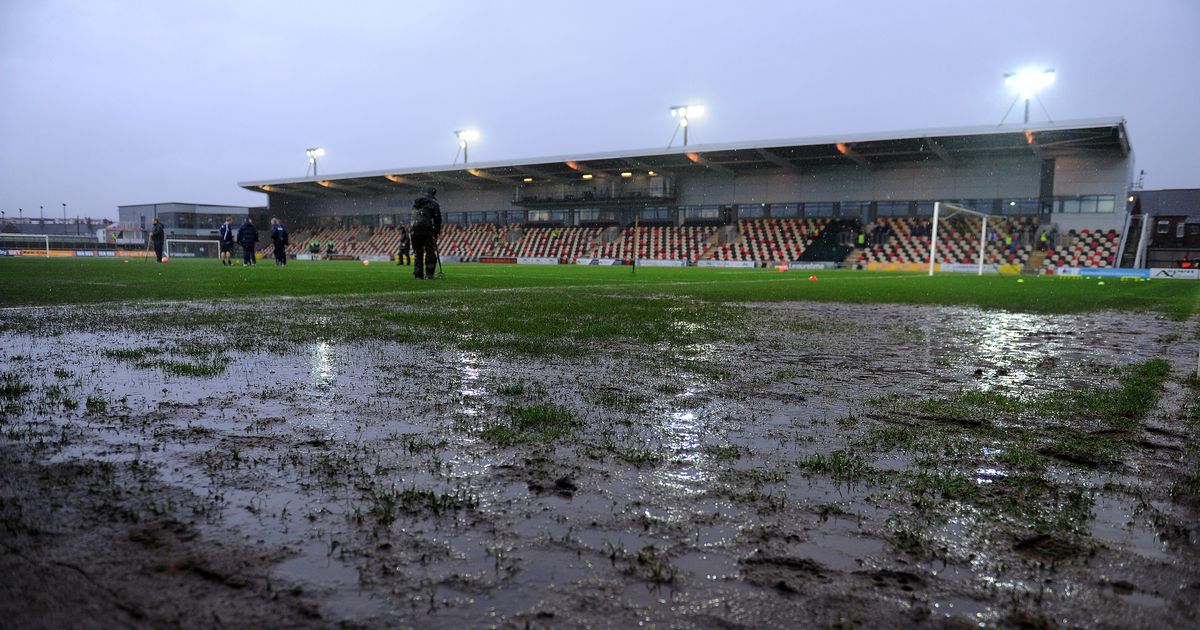 Rodney Parade's pitch is not as bad as it was here in 2016 but it will still host two big games again this weekend. Pic: Getty Images.

FA Cup giantkillers Newport County are hoping their Rodney Pitch will be “awful” once again when they host Premier League Brighton on Sunday night.

It is the fourth season in a row the League Two promotion candidates have reached the third round and their recent scalps include Leeds United, Middlesbrough and Leicester City. They also secured a draw with Tottenham.

The fact there will be a Welsh regional rugby derby on the pitch 24 hours before the cup clash is going to impact on the quality of the playing surface and County boss Michael Flynn hopes the Brighton players will take one look at it and wish they were somewhere else.

“The fact there is a rugby game there on Saturday isn’t ideal. It’s Rodney Parade and we know that anything can happen there,” said Flynn.

“I expect the pitch to be awful, although the dry weather and frost will help to make it flatter. But it will be bobbly, we know that because of the game on Saturday – that’s just how it is.

“I just hope it is a real eye-opener for the Brighton players who are used to a perfect surface at the Amex when they arrive.

“I hope they walk through the gates at Rodney Parade and can’t wait to get out again. We’ve got to use things to our advantage.

“Nine times out often they should win the game because of the quality and strength in depth they’ve got and the level they are playing it, but let’s hope this is our one in 10 chance of winning like we’ve done in the past.”

Newport’s chances of causing another upset have been dented by the recall of five loan players, including Swansea defender Brandon Cooper and Swindon midfielder Scott Twine, who have featured in every game this season.

But Flynn knows his players will rise to the occasion as ever because they know the importance of the competition to their club.

“Without the FA Cup we would be struggling to still be here. The FA Cup has kept the club going, it is as simple as that,” added Flynn.

“After the ‘Great Escape’ season we were £700,000 in debt. Then we had Leeds and Tottenham Hotspur in the FA Cup the next season and we wiped out our debts.

“This competition has helped us to clear our debts, get money in the bank and allowed us to plan forward. It has been our saving grace.

“That’s part of the reason why it is the best competition in the world. Just look at Marine hosting Spurs and Jose Mourihno – it just doesn’t get any bigger than that for their players.

“They will never experience that again, without being disrespectful, and they’ll remember that game until the day they die – and so will their parents and their children.

“It is an unbelievable achievement for them. It is not just Newport County, there are some lovely stories this season.

“We can’t afford to dismiss the FA Cup because of what it means to the finances of the club. When we were drawn against Tottenham, that was more important to us than getting promoted – they are the financial implications at our level.

“It is polar opposites for the Premier League clubs. It would be nice to be able to pick the league over the FA Cup, but I know that whatever team Graham brings with him will take the game seriously.”