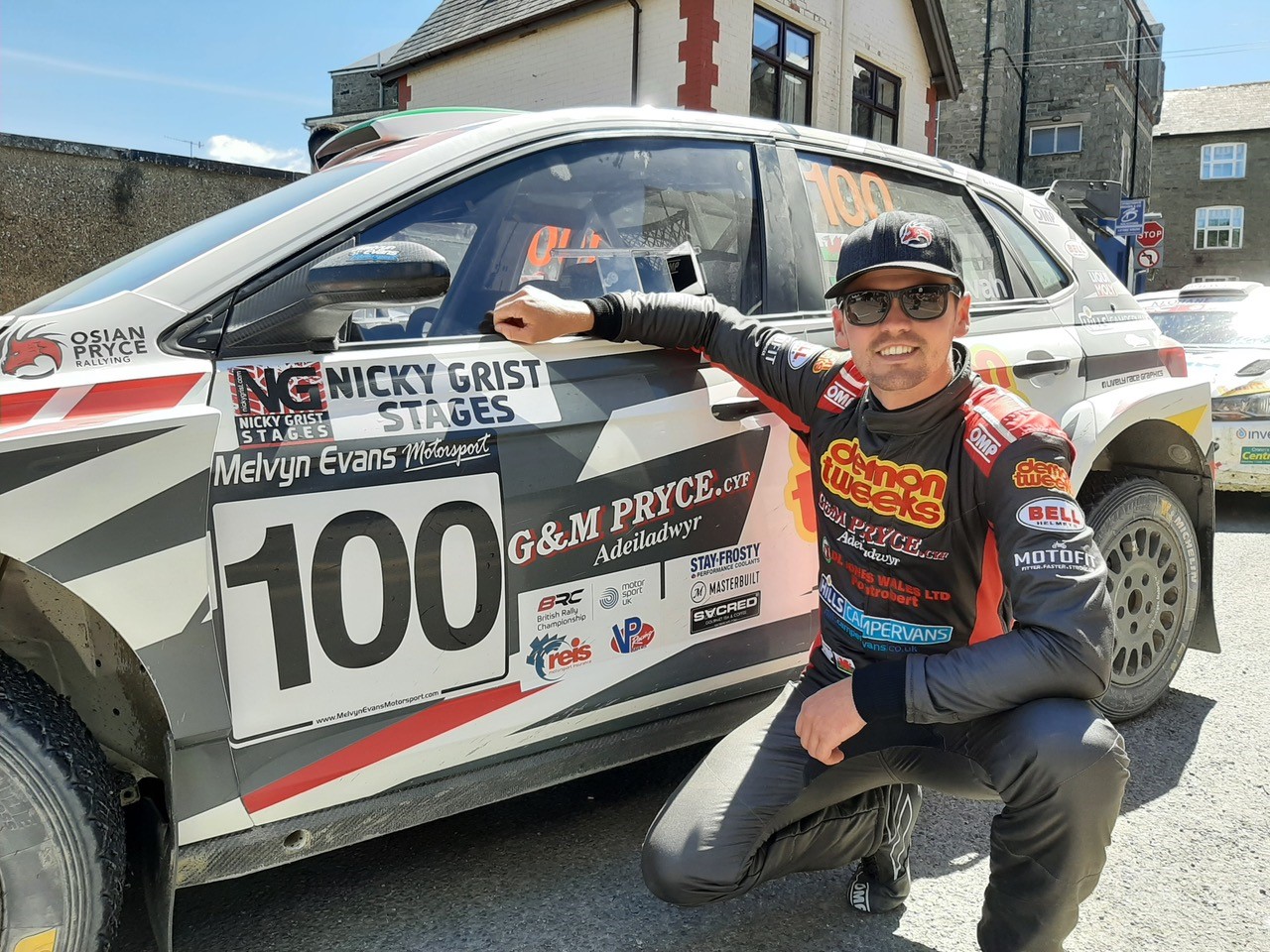 Osian Pryce poses after his victory at the Nicky Grist Stages.

Osian Pryce celebrated his 100th rally by leading the Nicky Grist Stages from start to finish – with his victory at the weekend putting his British Rally Championship title-winning aspirations firmly back on track.

Starting with number 100 on the door of his Volkswagen Polo GTI R5, Pryce and co-driver Noel O’Sullivan took the lead on the opening stage of the Builth Wells-based rally and held it until the end of the 45 stage mile event – winning by 14.9 seconds.

Having won the opening round of the BRC, the Corbeau Seats Rally Tendring & Clacton, this is Pryce’s second victory in three events and the perfect response to the disappointment of being disqualified from the Jim Clark Rally (for driving along a closed road stage on a puncture).

Pryce’s stunning runs over the famous Halfway stage was key, as he set fastest time through there in the morning (SS3) and afternoon (SS7) – both times extending his lead more than on any other stage.

Victory moves Pryce up to second in the BRC drivers’ standings, 11 points behind Keith Cronin who finished second in another Polo GTI R5.

“We have always been strong on the opening Llyn Login stage. I knew we had to make a good start and whilst we didn’t take any risks the time was still there.

“In contrast, Monument has always been a weak stage for me – I don’t know why. We were second fastest through there and just held onto the lead.

“I knew on the recce that Halfway would be the stage. We got into a good rhythm, settled into the car and everything worked well – as it did in Crychan.

“We didn’t change anything in service except the tyres.

“The afternoon loop went well, with the Halfway stage once again being key.

“We had a bit of low tyre tread going into the last stage and picked up a puncture about a mile and a half from the end, but we kept going and hoped for the best and it all came good in the end.

“I needed this win, mentally more than anything.

“We said that we were out to win the Nicky Grist Stages – it’s easy to say, but not so easy to do it on the day!

“I didn’t feel like I drove flat-out all day, so there was some speed left if we needed it.

“I’m very happy that we’ve turned things around after the disappointment of the last round and the fight for the British rally title is very much back on.”

The final podium position wasn’t decided until the final stage, with Tom Llewellin/Ross Whittock missing out by just 0.7 seconds after a great drive in their Brace’s Bakery Ford Fiesta R5.

A delighted Andy Davies recovered from his monstrous Clacton Rally crash to score his first BRC points of the season with fifth spot.

In what was effectively a brand-new Fiesta, Davies and co-driver Michael Gilbey made the most of their BRC debut on gravel, racking up the miles and confidence in a positive day for the pairing.

James Williams/Dai Roberts were aiming for a win, but after several technical issues with their Hyundai i20 R5, they were eventually forced to stop on the penultimate stage when the car’s suspension failed.

They finished 1min 20secs ahead of Dylan Davies/Mark Glennerster in a Škoda Fabia R5+, with James Giddings/Lee Taylor coming home third in their Fordpad Mitsubishi Evo 9.

Ioan Lloyd/Sion Williams bounced back strongly after their accident on the Jim Clark Rally and they were in a close fight for Junior BRC honours after the first two stages.

They decided to miss SS4 and return to service, but restarted and set some impressive afternoon stage times.

William Mains had also crashed on the Jim Clark and bought the Vauxhall Corsa he used to rally back to contest his first ever gravel rally. Co-driven by Pete Phennah, the Llandysul driver won his class – just like he usually does on asphalt events!

Gareth Lewis/Ryland James were forced to stop just seven miles from the end of the event after a broken half-shaft left their Ford Escort Mk1 RS2000 in one-wheel drive.

The event, which is now one of the largest rallies in Wales, brought a carnival atmosphere to Builth Wells with 160 crews from six major British rally championships gathering in the service park, located on the local rugby pitch.

The Mayor of Builth Wells, Cllr Alan Waller, flagged the cars away from outside Strand Hall on Strand Street at the start of the eight-stage event and presented the trophies at the UK’s most scenic podium ceremony on the banks of the River Wye.

Following the success of the event – not just in sporting terms, but as an economic boost to Builth Wells (the rally organisers alone booked 55 bed and breakfast rooms in the town) – the Nicky Grist Stages can announce that the 2023 event will take place on Saturday 8 July.

Next year’s event will be the 14th consecutive year of title sponsorship from Nicky Grist Motorsports.

“The organisation has been excellent. The stages ran on time, the competition was fantastic, we had no dramas whatsoever and even the weather was perfect.

“Bringing the event into the centre of Builth Wells created a lot of buzz around the town and there was a fantastic atmosphere in the service park.

“It was great to see so many visitors walking around looking at the rally cars and talking to the teams.

“Many of them were locals, but a lot were people just passing through Builth who decided to stop and look at what was going on.

“I managed to get out to watch on the stages. The action was incredible and everyone had a great time.

“Rallying needs to embrace the smaller communities and one of our key aims was to bring trade into Builth Wells.

How great was it to be back on the gravel? 🙌@NGStages – we had a blast 👍#BRC pic.twitter.com/G25kQgx5T9

“We certainly did that, and we created quite a carnival atmosphere too. I’m delighted by the way everything went.”

This year’s Nicky Grist Stages teamed up with Carbon Positive Motorsport to provide carbon offsetting as part of a long-term roadmap and commitment to mitigate the event’s carbon footprint.

Ninety rally crews registered to carbon offset their event-related travel, plus a considerable number of marshals, officials and spectators, which was a tremendous uptake in year one of the partnership.