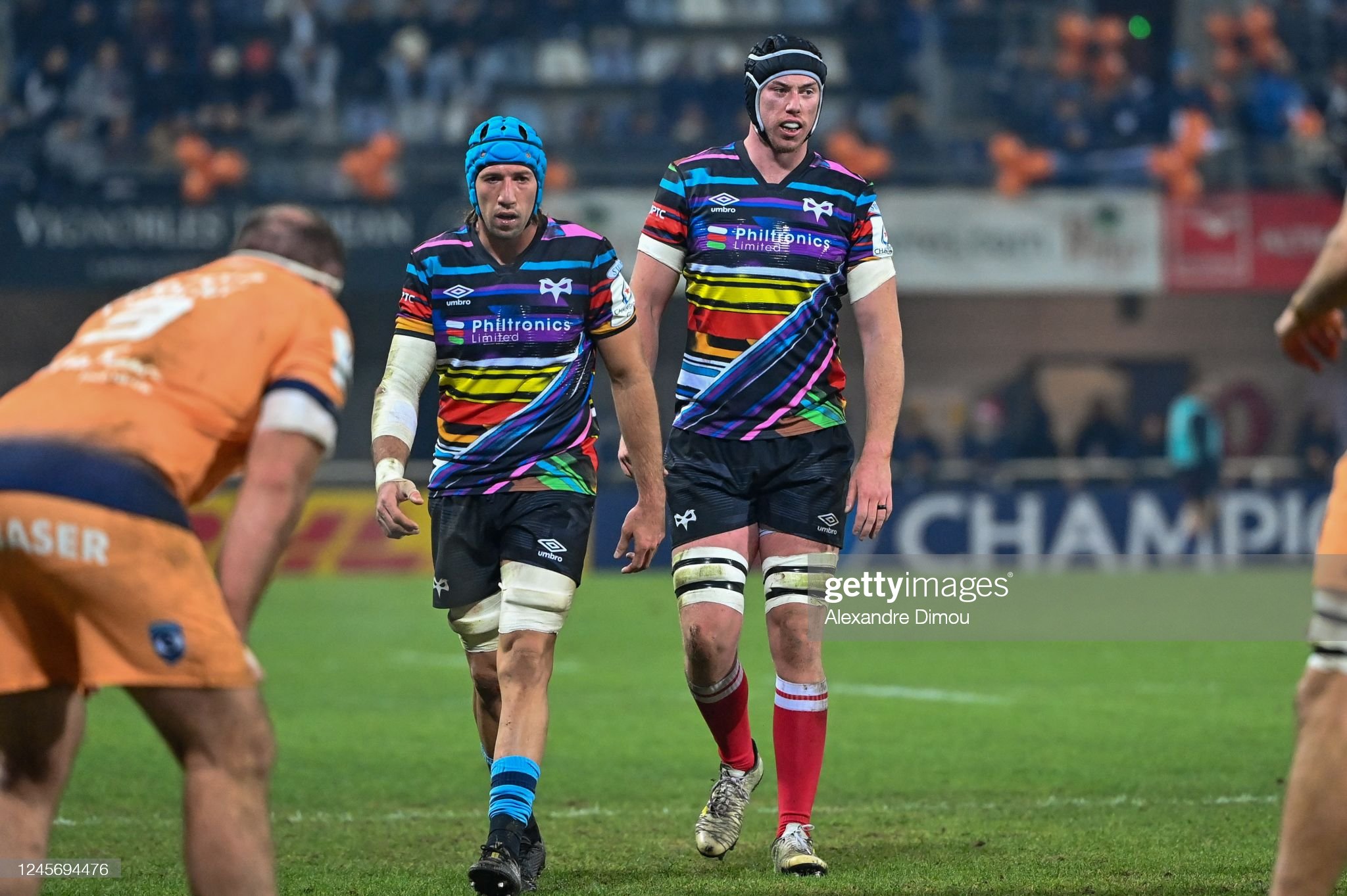 Justin Tipuric and Adam Beard of the Ospreys during their victory over Montpellier. Pic: Getty Images.

Former Ospreys coach Sean Holley has backed his old team to do the double over Montpellier this weekend – but doesn’t expect them to go deep into the Heineken European Champions Cup.

The Ospreys will bid to repeat their stunning December victory over the French champions on Saturday night at the Swanssea.com Stadium in a match that is live on S4C.

Holley – now a respected TV pundit and analyst for a host of broadcasters – reckons the only Welsh region in Europe’s premier tournament are capable of repeating their 21-10 triumph across the channel.

But he thinks talk of Justin Tipuric’s team going on to threaten the contenders this season is premature.

“For the Ospreys to come away with such an emphatic win and performance must be massive in terms of their morale going into this game,” says Holley, who spent nine years at the region.

“Having said that, what we often find in Europe is that a team learns so much from the first game when they play teams back-to-back.

“A lot depends on Montpellier’s outlook. Are they now focused on the Top 14? If they are now less committed to success in Europe, then they will travel with a different attitude.

“The Ospreys have shown they have resilience, even if they lack striking nous. And the belief will be there, having beaten them away.

“I think they can win and will win. But a lot will depend on defending and kicking their goals and taking their chances.

“But as far as going deep into the tournament goes, when they come up against good sides in knockout competition they might struggle, even at home.”

The problem for the Ospreys, says Holley is that although they now boast a strong pack and reliable set-piece, they lack the creative talent to make the most of their possession.

Compared to the razor-sharp teams of their success-laden years, they are easily blunted by streetwise opposition.

“The Ospreys have to work really hard for their scores,” says Holley.

“They are possession-dominated in their approach and they have an excellent set-piece.

“That’s been reflected in the last few seasons.

“They lack a cutting edge in midfield, they are missing George North, and they are short at full-back.

Here’s your Ospreys team to face @MHR_officiel in the @ChampionsCup!
To the team behind the team, you keep take care of business off-field, so we can be our best on-field. Thank you

“They used to have Lee Byrne hitting the line and a back three that involved Shane Williams and Tommy Bowe. They had X-factor and as a coach you could use decoy plays because you had threats everywhere.

“I just don’t think they have enough of a threat these days against the very top sides.”

A victory on Saturday would put the seventh-place Ospreys in a healthy position to finish in the top eight of Pool B and go on to qualify for the one-tie round of 16.

But when they are up against the European big guns at that stage or in the quarter-finals, then Holley reckons his old team will find it tough going.

He adds: “The Ospreys have all the firepower there. But like we saw against Leinster last week, they struggle to get over the line. There is something missing.

“They should not have such a dominant scrum as that and end up not winning. At the end of the day, it was Leinster’s seconds and yet they seemed to have the ability to score at any time.

“On paper, if you look at the Ospreys squad, then they should be doing a lot better.

“But if you take Webby (Rhys Webb) out, and Tips (Justin Tipuric), then who is going to score the tries?

“Keelan (Giles) has scored tries when he has had opportunities, but who is their highest scoring player outside of Webby and Keelan?

“They can go to Cardiff and smash them by getting on top up front, but can they do it again against Montpellier?

“Can they do it against Munster or La Rochelle? I don’t know, I don’t think so.

“And If Montpellier are smarting and see this as a chance to get back in the Champions Cup, then look out!”

Live coverage of the Ospreys v Montpellier in the Heineken Champions Cup from the Swansea.com Stadium.