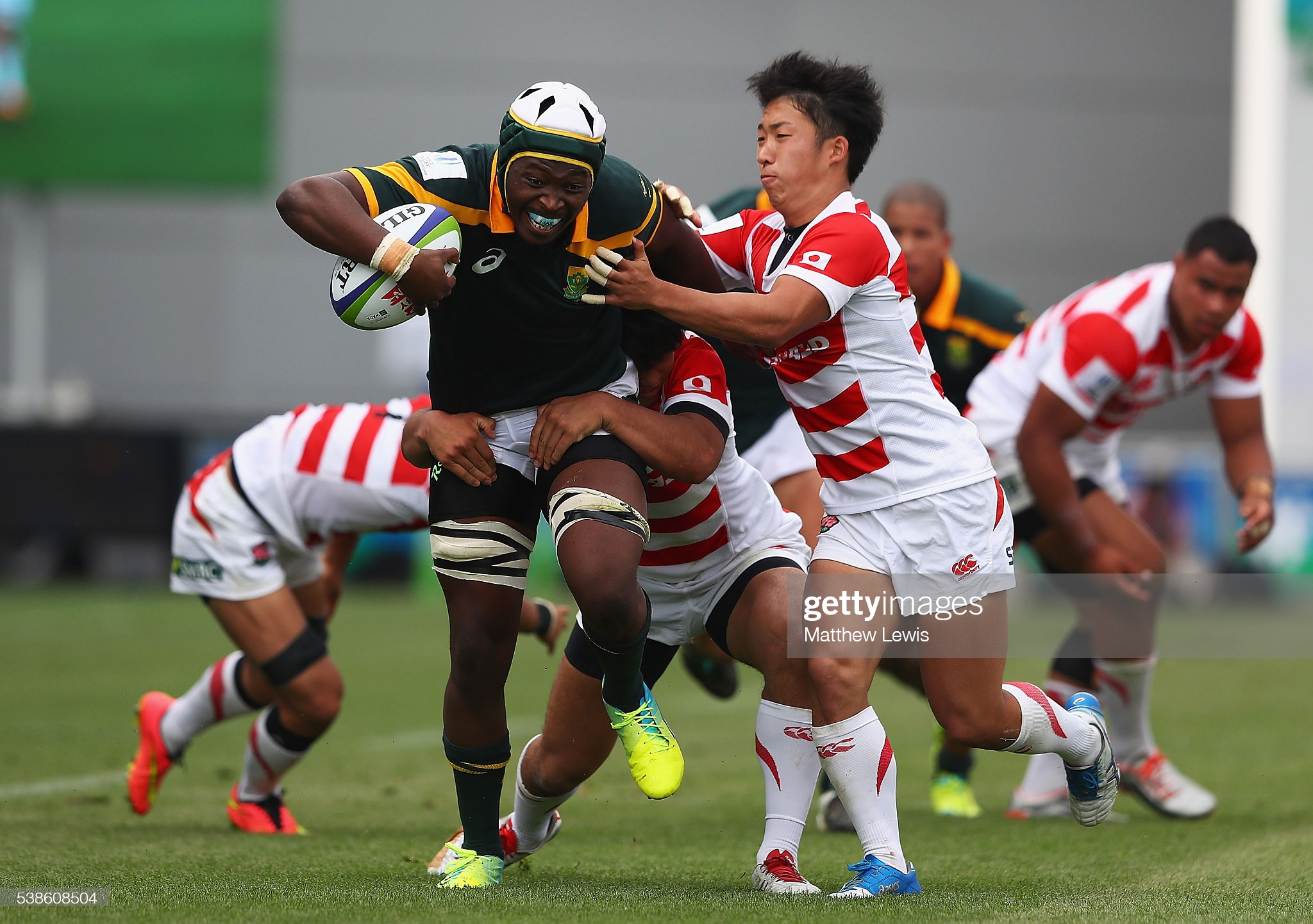 Junior Sipato Pokomela of South Africa makes a break through the Japan defence during the World Rugby U20 Championship match in 2016 in Manchester. Pic: Getty Images

The Ospreys are keen on beefing up their pack by adding some South African muscle to their back row.

The Cheetahs may have ended their involvement with the Guinness Pro 14, but the Ospreys see recruitment potential in three of their forwards – Oupa Mohoje, Sintu Manjezi, and Junior Pokomela.

Head coah Toby Booth wants to strengthen his squad for next season and has identified the back row as an area in need of improving.

Only one of the trio is likely to make his way to Wales but the Booth shake-up will not end there as the region are also keen on Cardiff Blues’ Wales Under 20s tight-head prop Ben Warren.

The 20-year-old from Llantrisant is part of the Blues’ academy squad but has found game time hard to come by at the Arms Park and the Ospreys believe he would be tempted to move.

The Ospreys meet the Blues on Friday, New Year’s Day, in match that has been switched to the Cardiff City Stadium due to ongoing repair work at the Arms Park.

“There’ll definitely be change for sure,” said Booth when asked about retention and recruitment for next season.

Congratulations to Ben Warren for his inclusion in the @cardiff_blues academy squad! Not forgetting our former, incumbent players, @iestynhar2 @_shanelewis6 @cameron_lewis13 GOOD LUCK TO YOU ALL! pic.twitter.com/9WRnhs6b8N

“It’s a bit of a minefield to be honest but we’ve made some commitments from an inside point of view that will come out in January.

“We want to get things tied up by the end of January or February at the latest, so we know where we are moving forward.

“Everyone hopefully is aware by now of how much I cherish developing our own players. It’s important to get as much quality into the bottom of your talent pyramid to allow them to grow into becoming the squad players and the household names in the Ospreys camp.

“Also, we want to make sure we also support the top as well to drive the ambition of the fans. We aren’t here as a development side we are here as a performance side.

“There’s a balancing act around that and if you add the financial element on top of that you can see how complex that can be but there’ll be some difference and we’ll be looking to put some stuff in the top and the bottom.”

The Blues’ home fixture against the Scarlets on January 9 has also been moved to the football stadium, before the Blues hope to return to the Arms Park for their European Challenge Cup tie against Newcastle Falcons on January 23.

All four professional sides in Wales are still unaware what their playing budgets will be next season due to the financial damage caused by the ongoing pandemic which has seen the Professional Rugby Board pot drop from £26m to a mere £3m.