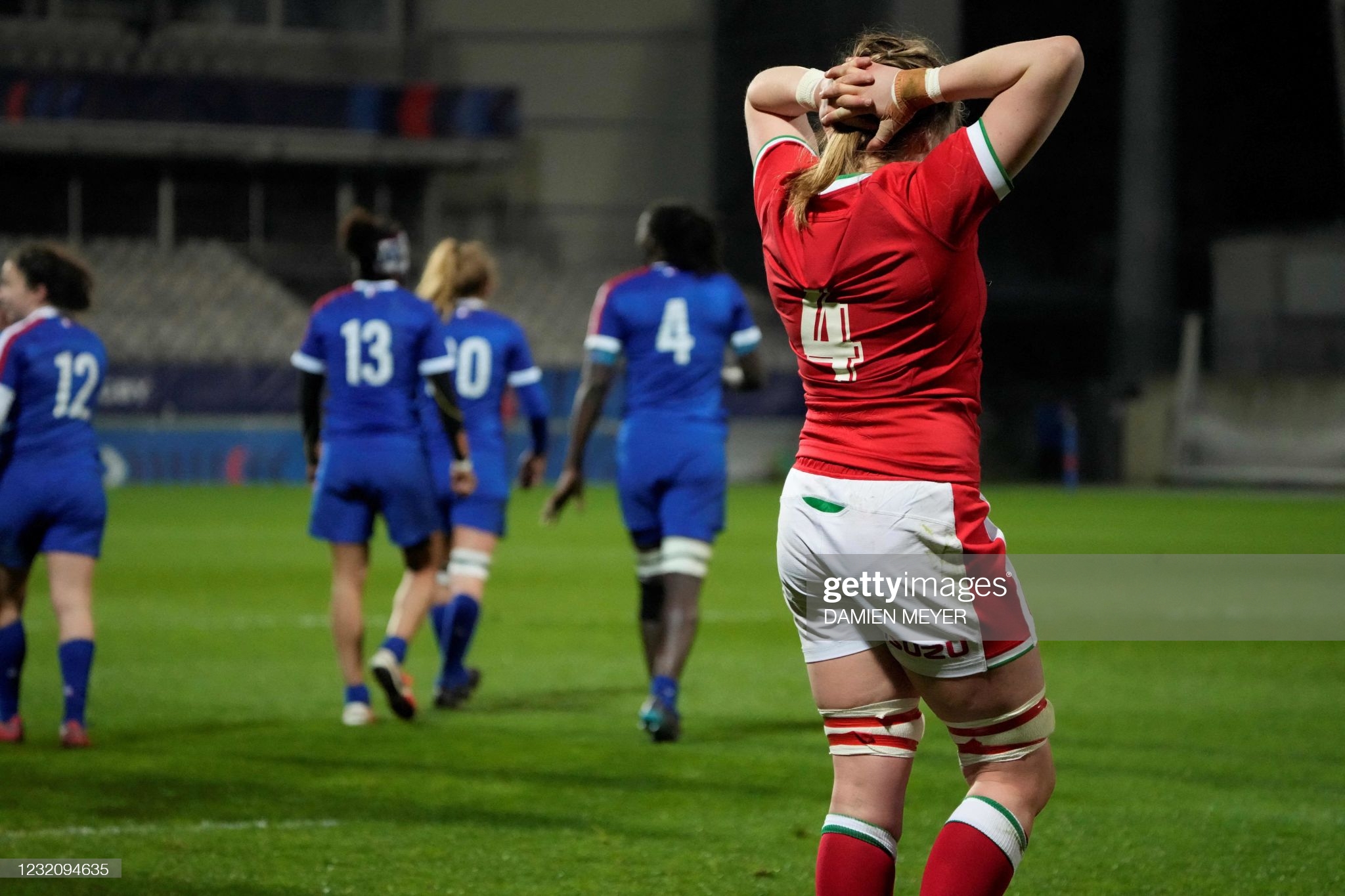 How about these for starters: 53 points and eight tries conceded, 36 missed tackles, four scrums lost and 14 penalties conceded. Ouch!

Then, you have to consider seven bad passes and eight handling errors in the 53-0 thrashing.

But the figures that show the real extent of the gulf between the semi-professional French and the still amateur Welsh team were centred around possession.

A massive 64% of the Welsh possession was in their own half and only 9% was in the French 22.

That was a virtual no-go area for Wales in a first-half that ended 31-0 to the rampant home team.

In fact, Siwan Lillicrap’s team enjoyed a mere 83 seconds in the French 22 over the course of an 84 minute game.

Abrahams talked about some “incredible moments” for his team, but they were all on the back foot.

“The French played some pretty incredible stuff and we congratulate them for theat. There were some incredible moments for us, but also some lessons to be learned,” said Abrahams.

“If we want to compete against the best teams in the world then we have got to go back to the drawing board and step things up. But the effort and attitude was outstanding.

“Look at the adaptation in the scrum and how we held them up twice and got some turn-overs in the dying minutes. We wanted them to be brave and they kept on fighting.

“It was a pretty disappointing changing room because none of us want to lose. We didn’t get the go-forward we wanted, but if we can get our consistency right we can definitely compete at this level.

Twice Wales held up the French over their own line in the closing minutes, and then shunted them off their own scrum ball at a vital defensive scrum five metres out.

That was a turned around from earlier on in the half when the French eight had twice pushed Wales off their own ball to create tries for their rampaging No 8 Emeline Gros.

But no sooner had Wales celebrated that minor success than Elinor Snowsill failed to find touch with her clearing kick and France ran the ball back and scored their seventh try in the corner.

They then sealed the deal with an eighth try from replacement hooker in the 84th minute shortly after Georgia Davies had picked up a yellow card.

With scrum half Pauline Bourdon converted all three, and then adding a penalty, France were 24-0 ahead in the opening half-an-hour.

At that stage Wales were all at sea and staring down the barrel of an even bigger hammering than the 50-0 defeat meted out to them in Cardiff a year ago.

You have to go back to 2016 for the last Welsh win over the French in the Six Nations, a thrilling 10-8 triumph in Neath, but since then it has been a tale of woe.

In the last three meetings the French have plundered 155 points and conceded three, scored 25 tries against none and completely outplayed Wales.

You have to go back five games for the last Welsh try against the French and it isn’t much better against England.

They have managed 169 points, and conceded 19, in the last three championship outings against Wales and scored 27 tries against three.

The point of mentioning these figures is to show the massive discrepancy in the women’s Six Nations tournament.

Lillicrap’s team were on a hiding to nothing when they kicked-off in Vannes, although their indiscipline under pressure and massive amount of unforced errors contributed hugely to their inevitable downfall.

HIGHLIGHTS: See the best action from France’s brilliant win over Wales including a Caroline Boujard hat-trick and two tries for No. 8 Emeline Gros #Women‘sSixNations pic.twitter.com/XBRtwKLplL

At least Abrahams now knows the size of the task he faces. Heart, spirit and courage should be a given at this level, and Wales had that in bucketloads, but the South African coach wants to develop a new attacking style to make his team more competitive.

You simply can’t do that without the ball and without any direction in your attack.

The irony is that the Welsh players have never played as much high level rugby as they have in the build up to this tournament thanks to their exposure to the Allianz Premier15s tournament.

Many of them have looked very comfortable individually at that level, yet collectively they were way off the French.

Next weekend’s home clash with the Irish will probably be a better yardstick for Abrahams to gauge what he has to work with.

Ireland are in the same boat as Wales in terms of playing numbers, resources and professionalism.

There is every reason to expect a much improved Welsh performance, and even a victory. But it won’t happen if they fail to find touch with as many penalty kicks as they did in Vannes, throw crookedly into as many line-outs and miss as many tackles.

The pandemic has thrown preparation for this tournament out of kilter and Lillicrap’s team deserve the highest praise for the way they have come together to represent their country in these difficult times.

But as she said after the game, the time has come for a long hard look in the mirror.

They won’t like a lot of what they see, but if they can cut out the individual mistakes they will be in with a chance next time at Cardiff Arms Park.