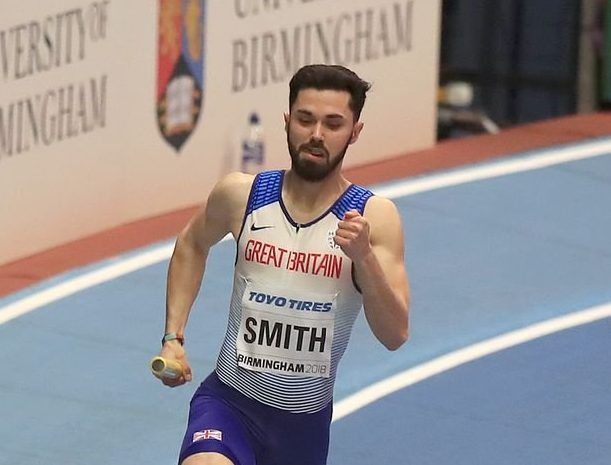 In his third and final interview with Welsh athletes competing at this weekend’s European Indoor Championships in Poland, Dai Sport’s Owen Morgan speaks to Cardiff AC star Owen Smith about his hopes for Torun, training through COVID-19 restrictions and of combining athletics with a full-time job in car sales.

Owen Smith will travel to Poland aiming to take care of some “unfinished business” in a Great Britain vest.

The Cardiff Athletics star is part of the GB 4x400m squad for the European Indoor Athletics Championships in Torun where he hopes to put past disappointments behind him.

In 2019 Smith travelled to the European Indoor Championships with hopes of reaching the individual final and winning a medal as part of the 4×400 team.

However, a final place eluded the Deeside product and illness robbed him of a chance to compete in the relay.

Later in the year, Smith was selected to represent GB again at the World Relay Championships in Japan, but was forced to withdraw due to an injury which in turn put paid to his hopes of travelling to the World Athletics Championships in Doha.

The fiercely proud Welshman hopes the trip to Poland will be the first step on the road to another GB vest at the Tokyo Olympics and ultimately representing Wales at the 2022 Commonwealth Games in Birmingham.

Asked about the disappointments of 2019, Smith told Dai Sport: “Going into Glasgow, I had really high hopes for the competition, I’ll be honest, I came away from it massively disappointed with how I performed that weekend.

“I was ranked eighth in Europe going into it and I genuinely felt I had a chance of making the final.

“I thought we would medal in the relay. But I came down with some illness that ended up causing my heart rate to go through the roof and I had a temperature, so they wouldn’t declare me medically fit to race in the relay.

“So for me, I have massive unfinished business in the relay sense because I would have loved to have been there in Glasgow in a home championship in the relay.

“I was fortunate enough to do it in Birmingham at the World Championships and there is nothing better than being involved in a relay. You are not working for yourself, you are working for a team. It just makes it more special.

“But with the injury that followed on from indoors, missing out on Japan and then the knock-on effect that had on the rest of the year. I just couldn’t get back to where I had been indoors.

“Ultimately, I wasn’t in a position where I could fight for a team place in Doha either. For me, 2019 was a year that started off with so much promise with the British Champs and then from Glasgow it literally just went downhill, so this is an opportunity to get back out there.

“I’ve got unfinished business, I won’t lie, and I know the rest of the boys will be of a similar mindset.

“We want to go and push for a medal and there is no reason why we can’t. The extra motivation of what’s gone on in the past is hopefully going to give me the edge in the relay.”

If 2019 was a disappointment due to illness and injury, 2020 was virtually written off due to the COVID-19 pandemic with Smith only competing twice as the sport was brought to a standstill.

All of which made clinching a GB relay place with his performance at last month’s European trials in Manchester all the more pleasing.

Smith said: “That race was nowhere near the fastest times that I have run indoors, but for me, personally, it was probably one of my best performances when you consider everything that has gone before it.

“To then be able to do that when it mattered, with COVID and everything that has gone on. To come out of that and to be selected for the European Championships, it’s a pretty mad concept.

“If you had told me six months ago that you are going to be selected for the European Championships, firstly I probably would have thought they wouldn’t be going ahead, there would be no races and I wouldn’t be in a position to qualify because you’ve gone from training on the roads and the hills to being back on track.

“In a six month window, you’ve gone from plodding along to we’re going up against Europe’s best and pushing for a medal as a relay team, so it is a crazy concept.

“It’s mad how things have changed so quickly over a short period of time It’s probably going to be a very different championships to what has gone on in the past. We’ve just got to embrace it, we’re there, we’re running for Great Britain which is a great honour.”

Proud to announce I’ve been selected for my second European Indoor Championships in Poland🇵🇱
–
Can’t wait to pull the @BritAthletics vest back on as part of the 4x400m relay team🇬🇧 pic.twitter.com/OVG92aVvtI

Smith is hugely grateful to have been able to train for the trials and even allowed to travel to them, thanks to being given special dispensation as an “elite” athlete on the highest level of Welsh Athletics support.

“Obviously during the first lockdown a lot of my training was done on grass, flat areas that we could find, roads and stuff like that, whereas I know people who are still in that position where they can’t get back on the track.

“I can’t complain and say I’ve had it worse because I am fortunate, I’m one of the very few in Wales who have been given dispensation and luckily I’ve had access to the track pretty much all the way through since July of last year.

“It’s great to have these opportunities, but at the same time I feel sorry for the other guys who are not in the position to compete. My girlfriend is an athlete as well and she can’t have access to the track.

“Having a helping hand from the Government in allowing a few training facilities does give us a massive advantage because there are a lot of guys in our training group who can’t get access to tracks because they don’t fall under this loose bracket of elite, which is not being clear enough with people.

“That’s the main problem, the term elite is a broad statement, it should be guys who are on Government grants or funding. That’s how they should have phrased it because we have got some really talented athletes in Wales who are not given access to the track.

“We’ve got a Commonwealth Games in 12 months time and Wales may not have a very big team because of the knock on effect that this has. This could knock out a generation of athletes coming through as well.”

Even though he counts himself hugely fortunate to be allowed to take part in the European trials, Smith says competing under COVID restrictions has raised its own challenges.

“It’s a weird environment to be in,” said Smith. “You’re going there to race but you take a Covid test before, then you’re stuck in a hotel room, you can’t go out to get food or anything, you can’t really do much because you are under restriction.

“You have to have letters of proof in case you are pulled over by the police and asked why you are so far from Cardiff. It’s just a surreal environment.”

Although he is one of the lucky ones granted access to facilities, training has still been a challenge because Smith, like the majority of Welsh athlete, juggles an international sporting career with a full time job.

“There have been a couple of sessions here and there where I have not been able to have access to the track because they restrict the hours. Because of work and commitments, I can’t always make it.

“In the grand scheme of things I’ve been lucky, it hasn’t changed my training too much. It’s just with work. trying to balance work and life with training, when there is limited access to facilities gives you another little barrier to clear as well.

“What we get from Welsh Athletics is great. We are fortunate to get what we get from the sport. But athletics isn’t exactly a well paid sport. I work for Sytner BMW in Cardiff and my work hours are 9am until 6pm.

“Then I will go and train in the evening. Luckily I have a very supportive and understanding boss who allows me the time to compete.

“Athletes do need other career options. For me, car sales is the career path I have chosen. You look at some of the guys who are going at the weekend, you look at that relay team we have going out to Poland, you have Lee Thompson who works full time, James Williams, he works full time as a teacher, Joe Brier . . . you’d think these guys are all on decent money to get to the standard they are running at, and yet even Joe is working as well.

“The best way to look at it is that if were in football and we had represented our country at football we’d be elite and on a lot of money. But because we have chosen to go down a different sporting route we don’t have that luxury.

“A lot of us are having to juggle work with training, then we have restricted hours for training. But it’s that kind of situation that if you want it enough you will make it work.

“I’d like to think that we are an example of that. With enough hard work you will get there.”

And that hard work will continue beyond next weekend with Smith also eyeing a GB relay vest in Tokyo.

“Ultimately, for me the main goal is the Olympics – if it goes ahead. We can’t take anything for granted. But going forward, I’m definitely looking at qualification for the Olympics in the relay.”

However, the main long term goal for the fluent Welsh speaker is a place on the Welsh team in Birmingham next year.

“2022 is the main one for me with the Commonwealth Games,” says Smith. I am proud of the fact that I am Welsh. Nothing would give me more pride than to wear the Welsh vest at a major games.

“I’m fortunate, I am in a position where I’ve done a world indoors, I’ve done two European indoors now, I’ve done a European outdoors, but there is something special about pulling on the Welsh vest.

“If you’re Welsh you will understand. I’ve come through the Welsh education system. For me, everything is how proud you are to be Welsh.