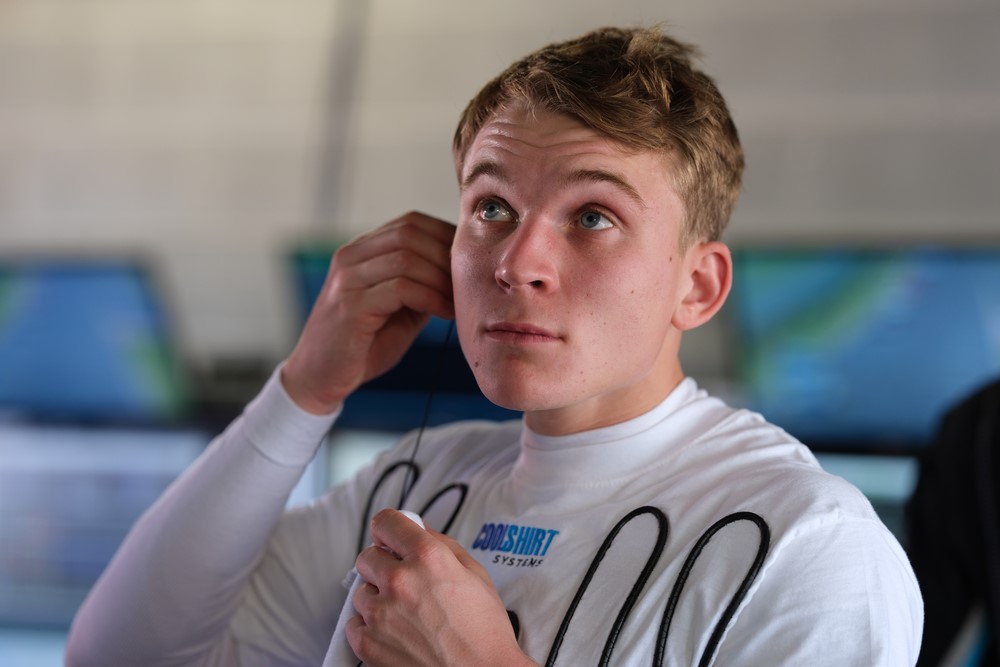 Matt Parry had to serve penalty when he Tok over in the car. Pics: R-Motorsport

Matt Parry will return to the Blancpain GT Series Endurance Cup for a third season in 2019, but will do so in new colours having inked a deal to race one of R-Motorsport’s distinctive Aston Martins.

The 25-year old enjoyed two progressive years in the Blancpain series with Nissan and RJN but, when that relationship ended, was quickly snapped up by R-Motorsport to pilot the all-new #62 Aston Martin Vantage GT3 alongside Belgium’s Maxime Martin and Frenchman Matthieu Vaxiviere.

Swiss-based R-Motorsport made its own Blancpain debut in 2018 and proved successful almost immediately with the old Vantage V12 GT3, winning second time out at Silverstone as well as wrapping up a handful of pole positions.

The team is the motorsport division of AF Racing, founded by Dr Florian Kamelger & Dr Andreas Baenziger in 2014, and runs its Aston Martins in partnership with leading single-seater team Arden and multiple sportscar champions and Le Mans 24 Hours winner JOTA.

Already familiar with the R-Motorsport set-up having raced with the team at this month’s Bathurst 12 Hours, Parry is looking forward to carrying the new partnership to even greater success.

“Right from our first meeting at last December’s Gulf 12 Hours, everything has been very positive,” Parry commented, “When Nissan decided to end its relationship with RJN, I had to find somewhere else to race, and the opportunity to join R-Motorsport was one I could not ignore.

“I really enjoyed my first two seasons in the Blancpain GT Series Endurance Cup, and I’m happy to be able to continue racing in the series with a team like R-Motorsport.

“Getting to drive the new Aston Martin Vantage GT3 makes the move even more special as my first real GT test was conducted in one of the older models and my family has always had a close affinity for the marque.”

While Parry’s first outing with R-Motorsport did not go as smoothly as planned at Bathurst, the former single-seater driver got to witness the team’s potential first-hand, with the sister car coming home a close second after twelve hours of racing.

The Australian race was the swansong for the old Vantage model, and the all-new version – which was launched and developed through the latter months of 2018 – has already begun to make headlines in sportscar racing.

Parry will get his first outing in the 2019 car at the opening Blancpain GT Series test at Paul Ricard over the 26-27 February, before undertaking an extensive testing programme alongside the team’s racing commitments.

“The latest Vantage GT3 is an awesome looking machine,” Parry noted, “It certainly caught the attention when it was unveiled last year, and I can’t wait to get behind the wheel and start preparing for the new Blancpain season.

“I’ve got two experienced team-mates alongside me this year in Maxime and Matthieu, and I’m sure that, combined with the performance R-Motorsport has already shown on the international stage, we can carry on from where the team left off, both in 2018 and at Bathurst.”

The 2019 Blancpain GT Championship Endurance Cup comprises five rounds, starting at Monza (Italy) over 13-14 April and taking in events at Silverstone (UK) and Paul Ricard (France) before the headline Spa 24 Hours at Spa-Francorchamps (Belgium) in late July. The series culminates at the Circuit de Catalunya in Barcelona (Spain) over the weekend of 28-29 September.

Parry welcomes a new partner to his sponsor portfolio this season, with specialist padding company Exgel Motorsport coming on board to join Ability Power, who return after backing the Welshman last year. Sport Wales and Kingud also continue their links with the former McLaren Autosport BRDC Young Driver of the Year in 2019.

“It’s fantastic to have Ability Power back for another season, and I can’t wait to welcome them to some of our races over the course of 2019,” Parry concluded,

“The addition of Exgel is also great news, having forged a relationship with them through my Peak Performance Management company. I’m looking forward to giving both of them, and my other existing partners, something to cheer this year.”

The Blancpain Endurance Series enjoys extensive live and highlights coverage on the BT Sport and Motors TV channels in the UK.