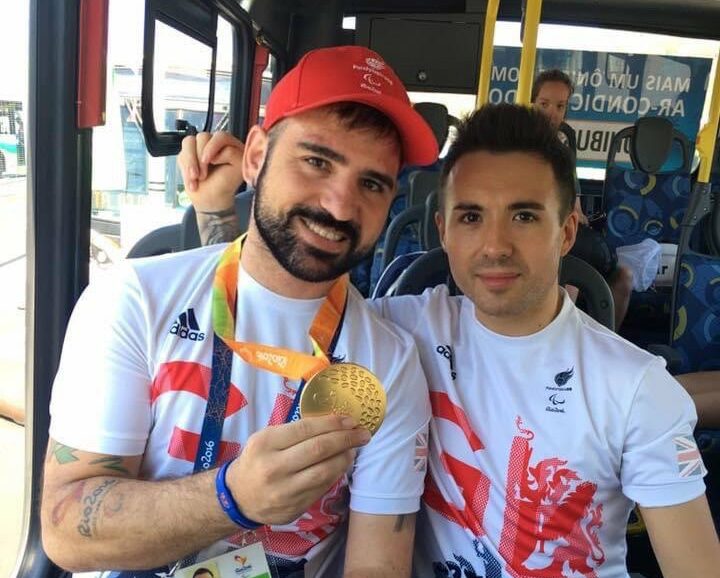 Paul Karabardak with his bronze medal alongside Will Bayley. Pic: Twitter.

Bronze medalist Paul Karabardak has vowed to chase more silverware next week after winning bronze at the Paralympics.

The Swansea table tennis veteran finally got on the podium for Great Britain in Tokyo after missing out in 2008, 2012 and 2016.

Karabardak won his quarter-final, but had to settle for bronze after losing in three straight games to American Ian Seidenfeld in his semi-final.

The 36-year-old Welshman has another crack at competing next week, though, when he will compete in the team event for classes six and seven, alongside Will Bayley, who has already won silver in class seven.

“Then I attack the team event with this Superstar of a man and more importantly my best friend @WillBayleytt for another medal!”

Karabardak – who turned to table tennis after suffering a stroke at the age of 10 – enjoyed a 3-2 quarter-final victory over Korea’s Hong Kyu Park but admitted he was weary by the time of his semi-final.

“It was really difficult because I was tired after the emotion of yesterday,” said Karabardak.

“If you put that aside Ian played superbly and he deserved to win. Even if I was at my best and even if I was fresh I think I would have struggled to live with him the way he was playing.

“It is fantastic to have got that bronze medal and it means everything to me. I thought it was slipping away so it is a dream for me because I have won a lot in my career.

“I’ve had some good wins and I’ve won World and European medals but it wouldn’t have been the career I would have wanted without a Paralympic medal.”

Fellow Welsh player Tom Matthews is competing at his first Games but he secured bronze after a semi-final defeat in his class to world champion Hyeon Uk Kim.

“It’s my first Games so I’ve got to be proud of coming home with a medal – I didn’t think I’d do that,” he said.

But it’s less than five years since @BenjaminPritch1 was left paralysed after that bike crash. He’s recovered, adapted, taken up rowing, made a #Paralympics and set a new Paralympic record on the way to the final.

“This has given me massive motivation. I can’t wait to get back to training. I’ll have a bit of time off now, have a bit of a break to reflect and come back stronger.”

Meanwhile another Welsh member of Team GB, para rower Ben Pritchard, was left outside of the podium places in his final.

In the PR1 men’s single sculls final, Pritchard was not able to repeat his Paralympic best performance from yesterday’s repechage as he finished in 10:06.95, over 50 seconds off his record time, albeit in very different conditions.