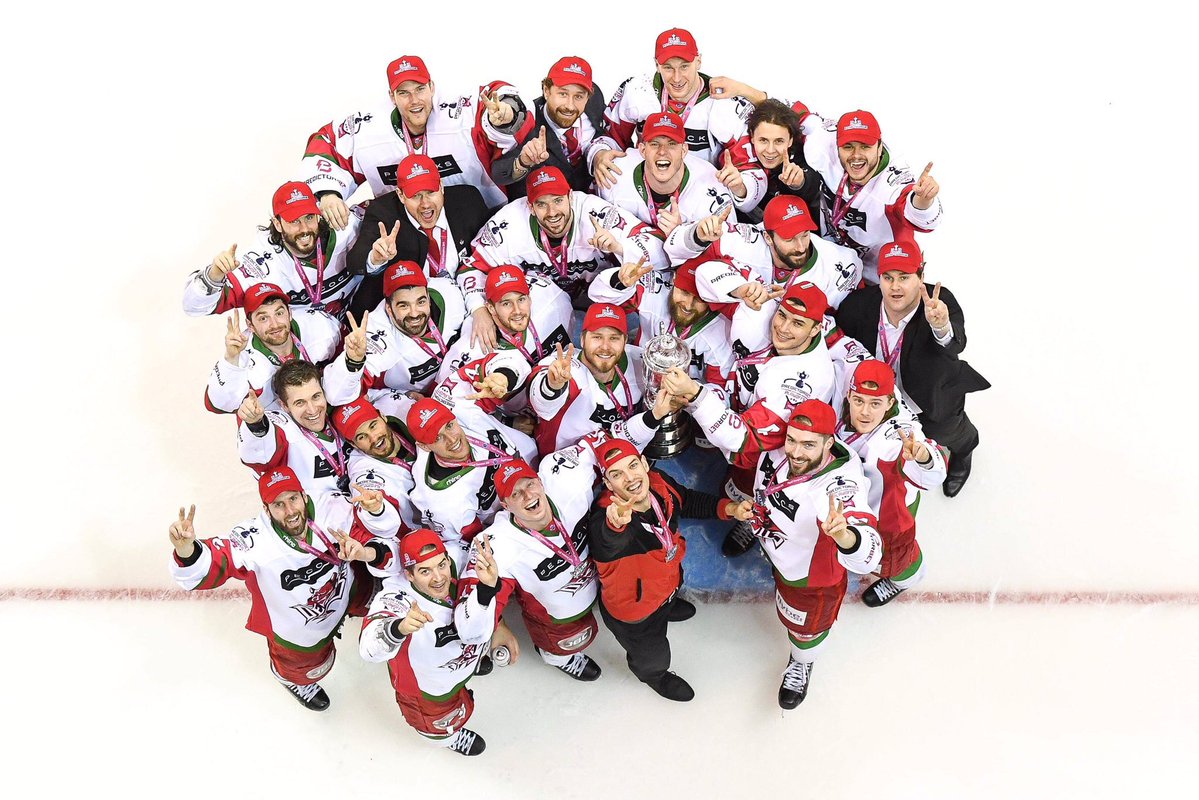 Cardiff Devils fans turned out in force when head coach Andrew Lord and his players paraded the PredictorBet Elite League Play-Offs Trophy at the Viola Arena.

Hundreds of fans packed the main bar area and roared their approval when captain Jake Morissette and head coach Andrew Lord took the trophy on stage.

The ages of supporters ranged from young children to senior citizens and they were all ecstatic to witness another evening of celebration for Devils.

They lifted the play-offs championship again after winning 2-1 against League title winners Belfast Giants in the final at Nottingham’s Motorpoint Arena.

That is an astonishing record during a time when ice hockey standards in the UK are at an all-time high and Devils play in the Champions League for a third successive season.

When Lord was asked how he felt about winning the play-offs for a second successive season, he said: “We beat Sheffield, we beat Nottingham and we beat Belfast.”

Those words earned ‘Lordo’ a cheer which was so loud it surely could have been heard in West Wales.

“This trophy means a lot because the games are so intense,” said Lord. “The series against Sheffield was tough. We were 5-1 down and clawed it back over the two games.

“I will always remember the way this group brought it on, from Bownsy in goal all the way out. That shows what it means to all of them.

“Gleason Fournier’s winner was, of course, huge, while Mike Hedden’s strike for the first got us going.

“I will never forget seeing Mark Richardson looking pretty much dead on the ice at the end. He had given everything, absolutely everything and could scarcely move.

“Again, that shows how much it means to the guys.”

Devils players turned out in force, although their seven Great Britain players missed the celebration because they are already training for the World Championship.

GB head coach Pete Russell has made additions to his squad ahead of the pre-World Championship training camp which started this week.

Cardiff Devils player Sam Duggan has been added along with Newport-born Welsh forward Joey Lewis, who plays in Germany, plus Paul Swindlehurst and Josh Tetlow.

Russell said: “We have a few injury niggles in the group so we have covered all bases and added to the squad.

“In adding the four guys to our group at this stage it gives us a chance – and the players a chance – to be all on the same page from day one.

“We are in a fortunate position where we are able to add some extremely good players.”

GB have four warm-up games ahead of the World Championship in Kosice, Slovakia next month.

They then play back-to-back games against KHL side Torpedo Nizhny Novgorod at the Motorpoint Arena, Nottingham on Saturday, April 27 (7pm) and at Fly DSA Arena, Sheffield the following afternoon (4pm).

“A few are regulars, while it’s good to see Josh (Batch) given the nod after not being in that little exhibition match there is amazing.

Devils’ talented young forward Toms Rutkis, too, must have been close.

Schedule for GB at the 2019 World Championship in Slovakia: