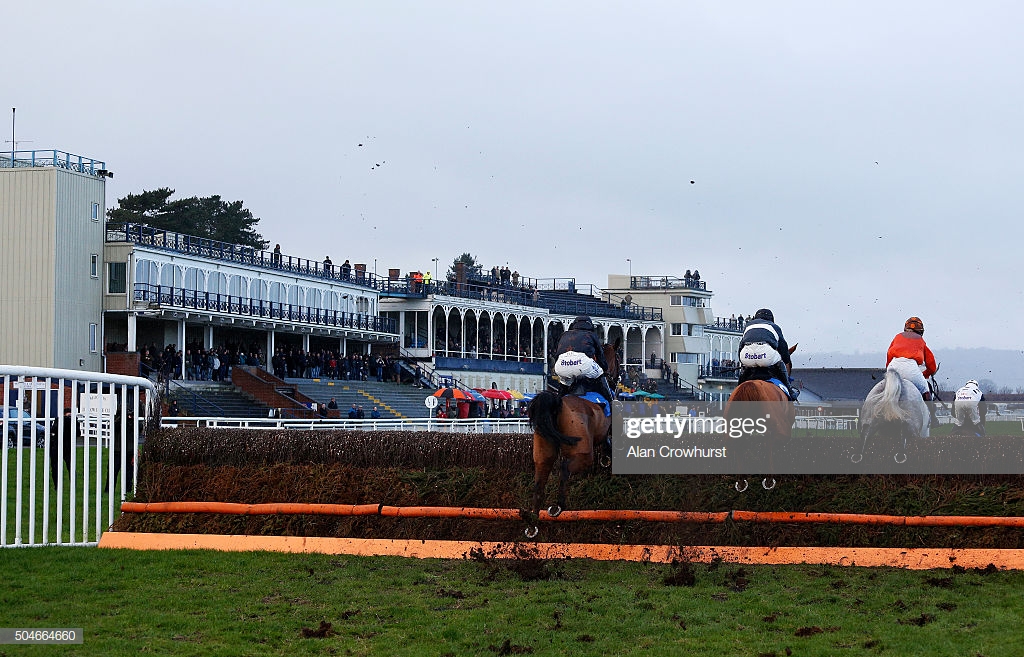 Ludlow racecourse. A general view as runners clear the fence in front of the grandstands at Ludlow racecourse on January 12, 2016 in Ludlow, England. (Photo by Alan Crowhurst/Getty Images)

Connor, a former national champion novice point-to-point rider, got his mount home by a length from Gold Chain in the mares’ handicap hurdle much to the delight of O’Brien, who trains in the heart of the Cotswolds.

Carrolls Milan was O’Brien’s 35th winner of the season and was returned at odds of 5-1.

Carrolls Milan holds on gamely to fend of the challenge of Gold Chain for @fergalobrien07 pic.twitter.com/wHMITn02fb

A large crowd packed into Chepstow to watch seven races.

The card began with a 2m hurdle.

Highest Sun (15/8 fav), trained by Colin Tizzard, won by three and a half lengths.

The next was a 2m4f maiden hurdle and Nicky Henderson’s Dickie Diver (30/100) was favourite and won two and a quarter lengths.

Two of the four horses competing in the 3m2f novice chase stood out on form.

Jammin Masters set out to make all the running and enjoyed a five or six length lead for most of the race. Chef Des Obeaux (11/10) had to work hard to halve the deficit on the far bend, but then his superior stamina came into play and he gradually wore down his rival to take the lead three out.

From there it was plain sailing and he came in 18 lengths ahead to give Nicky Henderson and Aidan Coleman a double.

Philip Hobbs’s course and distance winner Samburu Shujaa had been heavily backed (3/1 overnight down to 5/4 fav) for the 3m hurdle and repaid his followers handsomely.

Richard Johnson took him into the lead at the outset and had them all in trouble before a big jump at the second last gave him a clear advantage and the win.

Carmarthenshire-trained Tobefair ran his best race for a long time, staying on well to finish just over two lengths behind.

The final race was a bumper. The Nigel Hawke-trained Some Detail (10/1) was at the back of a group of nine who broke away in the home straight and made up ground steadily under pressure to take the lead with a furlong to go.

A Paul Nicholls horse, Golden Gift, was two lengths back in second.

This meeting is sponsored by www.nfrc.co.uk

Jump meeting with seven races on the card.

Seven races on the card.

Children aged 17 & under go free and parking is free.

Ffos Las held an extra meeting, helping to make up for the six days without racing due to equine flu. A sunny day and the going was good to soft, soft in places.

Venetia Williams’ mare Arqalina (5/1) won the 3m hurdle comfortably. With the minimum of fuss she came in five lengths ahead of Cornelius Socks, a nine-year-old having only his sixth race.

Another Williams mare, Top And Drop (9/2), sauntered into a clear lead on the bend under Charlie Deutsch and seemed to be in control up the straight.

The Nigel Hawke-trained Alminar (4/1 jt fav) had other ideas. He was seventh, 15 lengths behind the leader at the third last fence, when starting to run on strongly.

He made remorseless progress and, though Top And Drop rallied, they passed the post together.

The judge could not separate them, and called a dead heat.

The Williams-Deutsch combination was in the winner’s enclosure yet again after the 2m hurdle. Nine months off the track had done Bonne Question (17/2) some good and he recorded his first victory for almost three years.

He moved quickly from midfield into the lead on the run to the third last, and easily drew 19 lengths clear of Global Thrill.

The bumper went to Harry Fry’s King Roland. The 4/9 favourite made quite heavy weather of it, only getting to the lead with a furlong to go and having to being driven out by Noel Fehily to win by a length.

St Patrick’s Day racing with seven races on the card.

Irish band Henry Marten’s Ghost will be playing. Tickets are £15 in advance and will be £20 on the gate.

A bus will operate from Llanelli train station to the racecourse. £1 per journey on a first come, first served basis.

The bus will leave Llanelli at 11.40am and return from the racecourse at 5.35pm.

Entertainment will be in the undercover McCoy’s building. Family tickets (2xadults, kids go free) are £25.

Feature race is the West Wales National over three and a half miles, won in 2018 by the Peter Bowen trained Henri Parry Morgan.