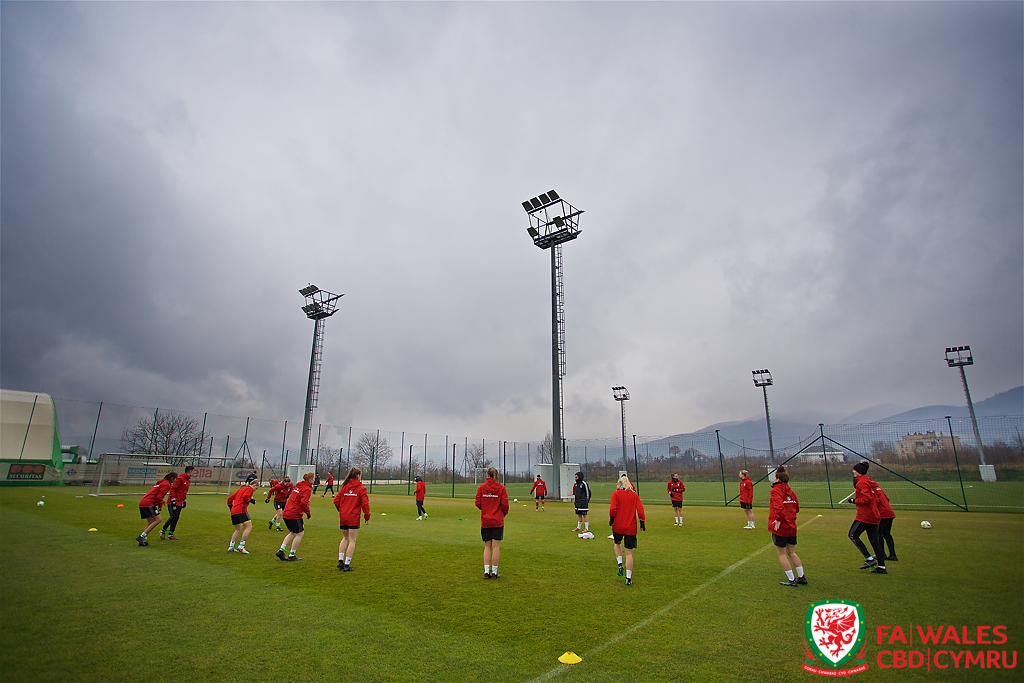 Wales in training at the BH Football Training Centre. (Pic by David Rawcliffe/Propaganda).

The Football Association of Wales are coming under huge political pressure to re-think their controversial plans to re-organise women’s football.

A group of Senedd members from across the political spectrum have condemned the FAW’s decision to relegate three teams from the Welsh Premier Women’s League from next season.

Abergavenny Women FC – who finished fourth in the table – plus Cascade Ladies YC and Briton Ferry Llansawel Ladies – are all to be left out of the new, streamlined eight-team elite level.

Since the decision was not related to on-field performance, many critics of the plan have likened the FAW’s proposal to that of the top European men’s clubs who tried to form a European Super League.

Now, three Senedd members have called on the Welsh government to intervene since the FAW receives public funds via Sport Wales and other direct funding.

Lesley Griffiths, the minister responsible for Welsh government business, has revealed that minister for arts and sport Dawn Bowden is to oversee meetings with the FAW.

The plan – which was met with widespread outrage on social media, including from clubs who will be retained in the top tier – reduces the number of teams in the WPWL from nine to eight.

The three relegated teams will all play in a new Tier 2 division.

Aberystwyth Town finished in the relegation spot but will not be demoted and Barry Town and The New Saints (TNS) will be new to the league without gaining promotion on the pitch. TNS do yet even have a women’s team and are recruiting for players.

No Fans’ Mass Protests, No Ranting Gary Neville . . . No Wonder The FAW Thought They Could Shaft Welsh Women’s Football

Laura Anne Jones MS (Conservative, South Wales East), Delyth Jewell MS (Plaid Cymru, South Wales East) and Hefin David MS (Labour, Caerphilly) have all called on the Welsh government to step in, while other members from all parties have  condemned the plans and issued a joint statement.

It read: “We support women’s club football in Wales and the Wales women’s national football team, as important elements of the Welsh sporting identity.

“We recognise the role that football clubs play in their respective local communities, from grassroots level upward. We are deeply concerned with the way in which the Football Association of Wales (FAW) made and subsequently communicated its recent decision to restructure the Welsh Premier Women’s League (WPWL) for the 2021-22 season.

“We believe that any such decisions should be based on sporting merit and made in a fair, open and transparent way with the reasoning made clear to clubs at the earliest opportunity. As such, we call on the FAW to ensure full transparency and to reverse their decision with regard to teams relegated from the WPWL.”

Caerphilly member Hefin David told Senedd members, “I think the FAW’s ineptitude has actually done the service in this Chamber of bringing together the Conservatives, Plaid Cymru and the Labour Party, because we are absolutely united on this. We are deeply concerned.

A true cross party team effort today, calling on the @WelshGovernment to challenge the @FAWales on their lack of transparency as they undeservedly relegate @CascadeLadies and other teams from @theWPWL. More on this to follow. https://t.co/FBUIOLP6r2 pic.twitter.com/MkiYVFLnVT

“Cascade Ladies YC—it’s my hometown, it was where I was born, where I was brought up. We’ve got grave concerns about the effect that this will have on grass-roots football in South Wales East, which will have no representation in the women’s premier league.

The plan – announced by the FAW in a statement put out on a Bank Holiday Monday – has been met with anger and bitterness by many critical voices, not just from those clubs affected.