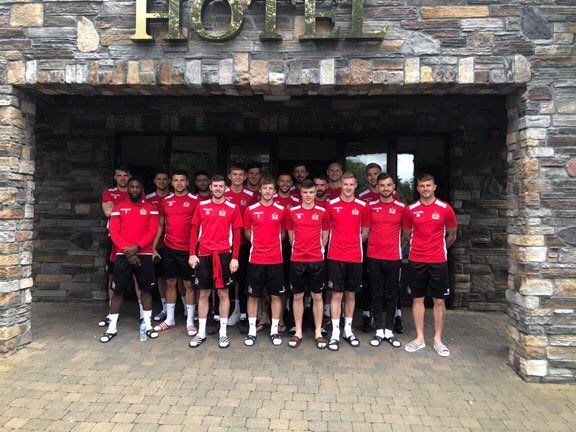 Mike Cosslett, who has had a 42-year association with Barry Town, can scarcely stop smiling these days.

Cossie’s beloved Barry are back in the Welsh Premier League and are competing in Europe with a genuine chance of making progress.

United go into their Europa League second leg time against Cliftonville in Belfast having drawn the first leg 0-0 in Cardiff and Cosslett says:”I’m a proud Barry boy right now.”

First team coach Cosslett, manager Gavin Chesterfield’s right-hand man, is a Uefa A licence coach who originally signed for Barry at the age of 18 and made more than 180 first team appearances.

The tough, committed defender, whose son Lewis is now with the club, went on to join Newport County, Aberystwyth Town, Merthyr Town and Weymouth.

Now he is a key member of Barry’s coaching staff and says: “I could scarcely believe when I looked across at the main stand in Cardiff and there were 2,000-plus local people.

“Hard work has really paid off for our club. Everybody connected with Barry Town have worked socks off – bar staff, chairman, secretary Dave Cole, our manager Gavin, his wife Hannah, the players, fans and so many more.

“Every one of those people can feel proud of their football club. The clean sheet at home was crucial – and if we can sneak a goal in the second leg, who knows what could happen.”

Barry Town players flew into George Best Airport in Belfast on Tuesday and are ready for the Solitude experience.

That’s the name of Cliftonville’s ground and the Northern Ireland League team expect a healthy attendance, probably around the same numbers who were at Cardiff International Sports Campus, Leckwith for the first leg.

“We are capable of playing better than we did in Cardiff,” says manager Chesterfield. “The clean sheet was a massive positive, but there is more to come from the team.

“When you put the first leg into context there is every reason to be proud of the players. We were playing on a neutral ground with a different playing surface than we were used to against opposition we did not know too much about.

“We were playing at a level my has had not experienced before. To keep a clean sheet and keep the tie alive is massive.

“There are lots of things we can improve on. Cliftonville had a lot of the ball and territory,  but we had moments ourselves.”

Cliftonville players know they are under pressure and captain Chris Curran says: “Barry Town were happier than we were to come out with a goalless draw.

“It was a cagey first leg. In a two-leg tie it’s important to stay in it. We have done that.”

They will open the Social Club at 4pm with live music from 5pm up until kick-off.

Fans of both clubs can also enjoy a special Pint & Burger offer for just £5 between 5-6pm.

It is all to play for at Solitude following a goalless draw in the first leg of this preliminary round tie.

The winners will play Haugesund from Norway with the team coming out on top in that round facing Sturm Grfaz from Austria.

Cliftonville are the oldest club in both Northern Ireland and the Republic of Ireland, having been founded in September 1879.

Nicknamed ‘The Reds’, Cliftonville is a semi-professional club who play their football in the NIFL Premiership.

They play their home games at Solitude, the oldest ground in Northern Ireland.