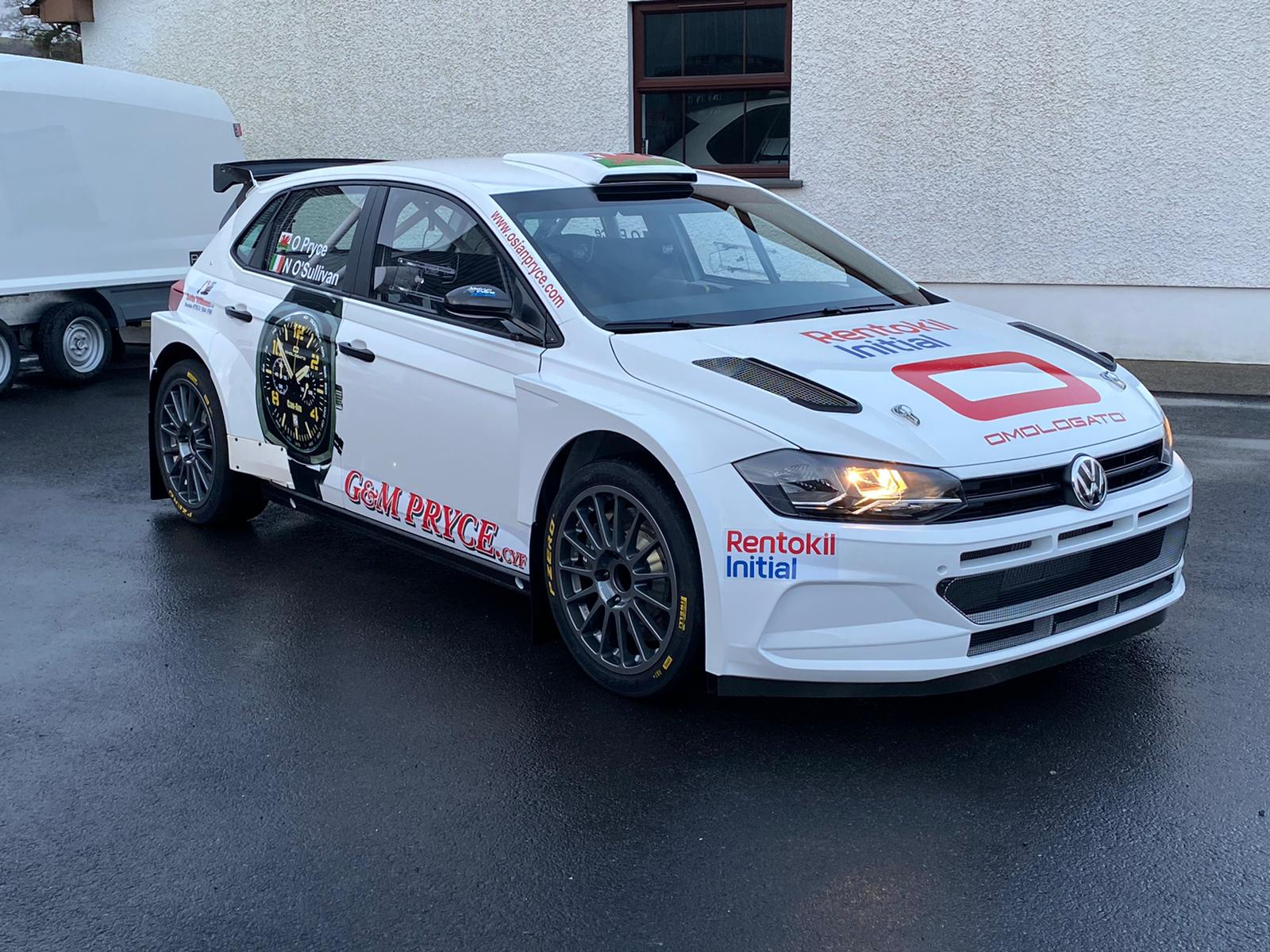 Osian Pryce will bring the Volkswagen brand name back to the BRC when he drives this Polo GTI R5 in West Cork.

Osian Pryce will contest his first ever rally in Southern Ireland this weekend, when he drives a brand new Volkswagen Polo GTI R5 on the West Cork Rally (14/15 March).

The talented 27-year old Machynlleth-born driver heads to the second round of the British Rally Championship lying second in the drivers’ standings.

On the opening round, the Visit Conwy Cambrian Rally, he finished second behind the wheel of a Hyundai i20 R5.

But the forthcoming St Patrick’s weekend rally will be a different kettle of fish, with over 180 cars entered for the eagerly anticipated clash between the BRC and Irish Tarmac Championship drivers.

Pryce is a master on gravel forest roads, but he’s no stranger to closed road asphalt rallies either and won Rae Bae Ceredigion, Wales’ first closed road stage rally, last September in his first rally in a Hyundai i20 R5.

And it will be the same Llanwrda-based Melvyn Evans Motorsport team that ran that Hyundai who will prepare and run Pryce’s Volkswagen in West Cork.

Support for Pryce’s West Cork Rally appearance comes from Omologato Watches, Rentokill Initial, Ryan Motorsport Insurance, Pirelli, Kevin Williams Plant Hire and G&M Pryce Ltd. In addition, Omologato Watches is offering a special discount on purchases made on-line. All customers have to do is put in the promotional code OSIAN10 at checkout at omologatowatches.com.

“It’s taken me a long time to make my rally debut in Southern Ireland, but it’s something that I’ve always wanted to do and needless to say I’m really looking forward to this one,” said Pryce. “I’m also excited to be driving a new car, and bringing the Volkswagen brand name back to the British Rally Championship. All I’ve done so far is driven the Polo GTI R5 out of Melvyn Evans’ garage to take some pictures of it and then reversed it back in – so I’ve driven it backwards as much as I’ve driven it forwards! But we’ll have a short shakedown test on Friday over in Ireland and then it will be straight into the rally. That’s not much time to prepare, but it’s obviously a pretty well sorted car and a very long rally, so I’ll just have to be a bit sensible at the start and bed myself in.

“As always, I’ll stick to my pre-event game plan and do my own rally. The guys in the Irish Tarmac Championship obviously know the West Cork stages well, but they also have slightly different rules regarding things like the number of tyres that they can use, so I won’t be worrying too much about them. We’ll be focused on trying so score as many British Rally Championship points as we can, so it will be the BRC boys that we’ll be competing against. Matt Edwards and Tom Cave set some very good stage times in West Cork last year, so I don’t see why we won’t be competitive ourselves, even in a new car and on an event that we have no prior experience of. If we have a good recce and make no mistakes, I see no reason why we couldn’t come away with a good result. And if, once we’ve found our feet, we can set some competitive stage times along the way, I’ll be really happy with that.

“And as ever, I’d like to say a big thank you to everyone who is supporting me in the BRC this year, particularly Omologato Watches, Rentokill Initial, Ryan Motorsport Insurance, Pirelli, Kevin Williams Plant Hire and G&M Pryce Ltd.”

The ceremonial start for the West Cork Rally takes place in the centre of Clonakilty on Friday (13 March) night, with 14 stages, totalling 140 miles, spread out over Saturday and Sunday.