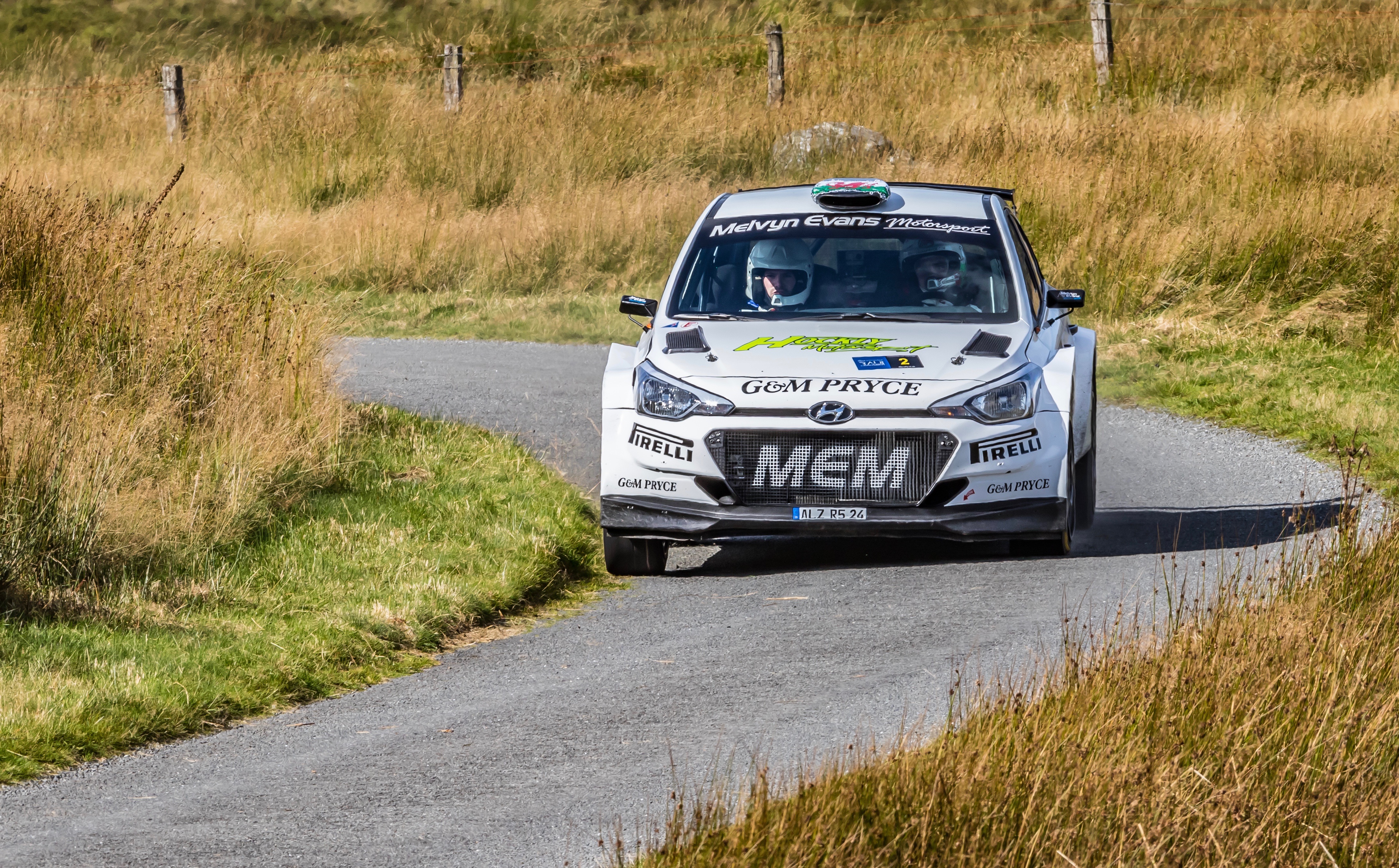 Osian Pryce showed why he deserves a full-time top-level R5 drive after winning the Rali Bae Ceredigion in his first rally in a Hyundai i20. Pic by Black Mountains Media.

Osian Pryce made history today by winning the first ever closed road stage rally to be held in Wales, scoring a sensational victory on the Get Connected Rali Bae Ceredigion.

Having not contested a rally in a R5 car for two years, and coming just six weeks after breaking his collarbone in a mountain ‘biking accident, the talented 26-year old Machynlleth-born star had said before the start that the odds on him winning the Aberystwyth University-based event where stacked against him.

“I didn’t expect this at all and it’s awesome to win this historic event,” said Pryce. “The plan was just to get to the finish but to have been locked in a battle with Tom [Cave] all day and to come out on top has been brilliant. It takes time to settle into a car like this so we’re really pleased with the result. The event was just fantastic and the way it ran is a credit to everyone involved.”

Tom Cave/Dale Bowen suffered early brake problems in their Hyundai i20 R5, and pushed hard on the afternoon loop of stages to secure second place.

“Whilst we had a few issues with the car this morning, I’ve really enjoyed the event and driving on such great stages,” said Cave. “From a competitor’s point of view the organisation has been fantastic and everyone involved should be congratulated for a job well done. I’m already looking forward to next year!”

One of the drives of the day came from Jason Pritchard. Navigated by Phil Clarke, the Builth Wells ace finished third in the new Scott Williams Motorsport-built Ford Escort Mk2 – beating a host of vastly more powerful four-wheel drive and turbocharged cars in the gorgeous rear-wheel drive machine.

“It has been an absolutely brilliant day and I need to thank Scott Williams Motorsport for lending me the car – it has been an absolute dream to drive,” said Pritchard. “The stages were very tricky, you really have to trust your notes and the co-driver, but what an awesome job the organisers have done with this event. Fantastic car, fantastic stages. I’ve been smiling all day!”

Event sponsor Damian Cole missed out on a podium finish by 21.1 seconds, as he and co-driver Max Freeman came home first in class and fourth overall in their Get Connected/Energizer-backed Ford Fiesta WRC.

“This has been one the toughest and consequently most enjoyable rallies I have ever driven – and you really know you’ve done a rally after these stages,” said Cole. “It’s been great to be involved with this event and work with such a motivated organising team, who have put in so much work to get this rally off the ground.”

It was also a good day for Dylan Davies, as last year’s Welsh Forest Rally Champion celebrated his birthday with a top 10 finish. He was co-driven for the first time in twelve months by Llion Williams in a Ford Escort Mk2.

There were many notable performances from many class winners too, not least from Jamie Jukes/Ellie Williams who finished just outside the top 10 in a Spencer ECA-backed Vauxhall Astra, Rhidian Daniels/Tomos Whittle who finished one place behind in their JJ Aggregates-supported Citroën C1 Max and Lloyd Morgan/Marc Clatworthy who finished high up in their Nissan Micra.

Not all of the top crews completed the technically tricky 44 stage mile route – which was dividend into eight closed road stages (four repeated) in the Cambrian mountains region.

Meirion Evans/Jonathan Jackson led the event after setting the fastest time on the opening stage in The Scan Station-backed Škoda Fabia R5, but crashed the Melvyn Evans Motorsport-prepared car soon after.

The landmark event – which was organised by the combined expertise from a team gathered from four separate Welsh motor clubs, namely Newtown and District, Aberystwyth and District, Lampeter and District and Teifi Valley – ran like clockwork and was hailed as a huge success.

“I’m delighted that everything has gone according to plan and the day has exceeded our expectations,” added Clerk of the Course, Wayne Jones. “However, we could not have done it without the help and support of so many people and organisations, the residents and landowners, local authorities, Aberystwyth University, our commercial partners – and the competitors. And of course, I have to thank the fantastic organising team, the marshals and everyone who has worked so hard behind the scenes to deliver what a safe and successful event. It’s enabled us to make history by running the first ever closed road stage rally in Wales.”