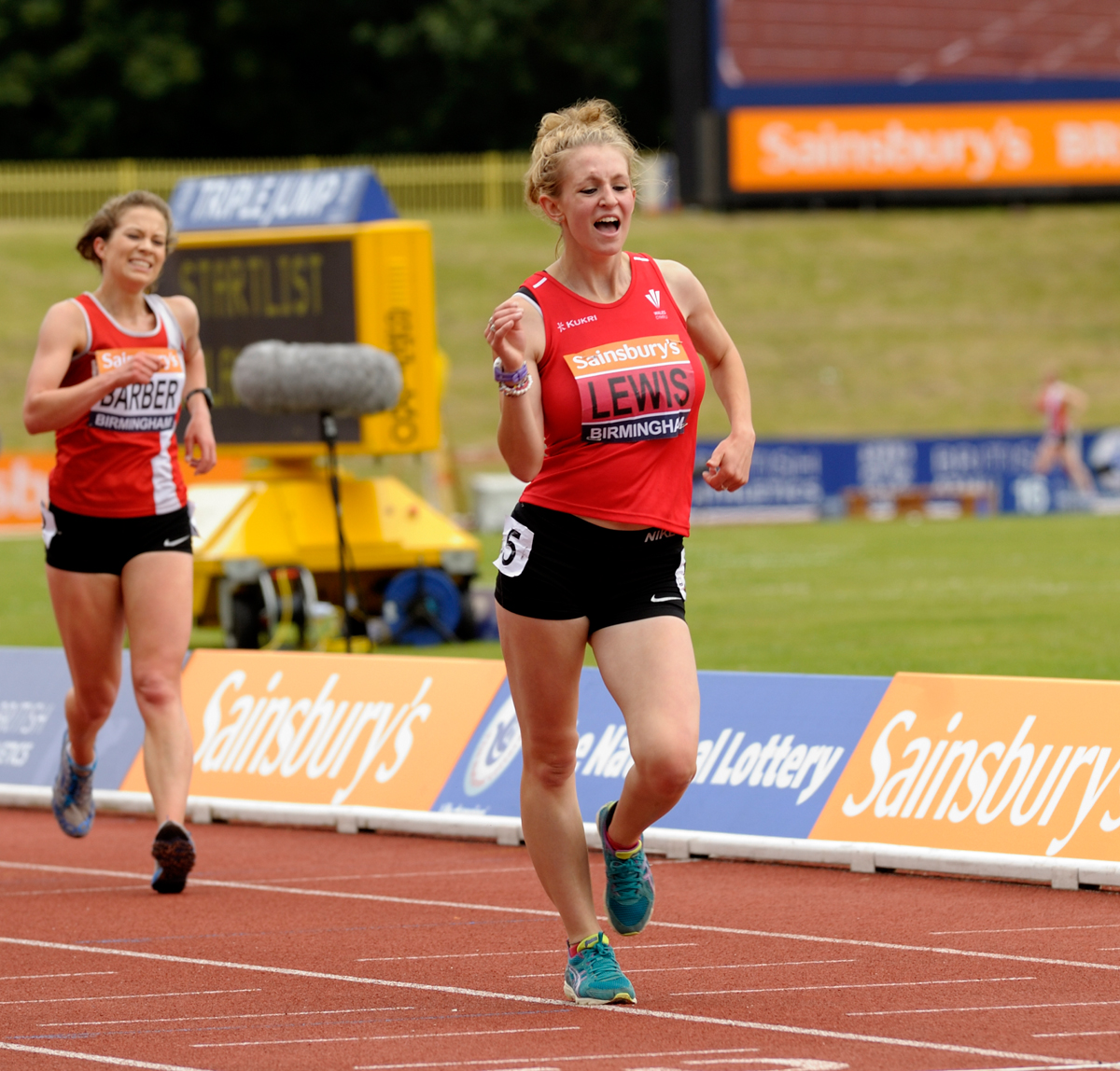 Heather Lewis has to decide to chase a World Champs qualifying time or focus on Tokyo 2020..

Heather Lewis combines her athletics career with helping to run the family business, the Clerkenhill Adventure Farm and Frizbee Golf Course near Haverfordwest. Now, after recently winning the British 20K race walk title, she has a bit of a dilemma as she tells Dai Sport’s athletics writer Owen Morgan.

The Pembrokeshire athlete won the British Grand Prix of Race Walking at Leeds last weekend, which also doubled up as the trials for the World Athletics Championships in Doha later this year.

Although Lewis’ winning time was a new personal best, it was outside the qualifying time for the championships which begin in September.

Now she must decide whether to chase the qualifying time in races on the continent, or consolidate and focus all her efforts on qualifying for next year’s Olympics in Tokyo.

Despite her delight at setting a new PB of 94.49, she was disappointed on missing on the World Championship mark of 93.30 which she must gain by midnight on September 1.

Lewis told Dai Sport: “When I finished, I did initially get really upset because I went into that race knowing how well my training had gone.

“I just felt I kind of deserved to have gone just a little bit quicker than that. I thought I had more in me.

“Nothing really went wrong on the day, I really pushed hard, I kept to the race plan I had in my head, and on the day that’s what I performed.

“But it’s always a bit disappointing when you know that there might be a little bit more in there. I feel that I have got that time in me, it’s just doing it.”

“Just doing it” will depend on discussions with her coach Chris Jones and the availability of suitable races with the potential for generating fast times.

Lewis said: “Now it’s deciding whether I try and go for it. I haven’t really spoken to my coach yet.

“It’s early days, but I’ll have a good chat with Chris and decide whether to try and chase this time because I feel I am very, very close to it.

“That’s the next step forward, to know whether to look at trying to do the World Championships and find the qualification time or to just look at the future, to concentrate on the Olympics next year and try and get close to that standard.

“Get higher up in the world rankings and not worry too much about the end of this year. I just need to discuss that with Chris.

“It’s very hard to find race walking competitions. I don’t think there will be any in the UK where you will have people to help get you through it.

“That’s the thing I missed a little bit in Leeds was not really having the competition around me. It’s always nice to walk with people.

“I did have a little bit of company in the first half, but when it matters in the second half, I didn’t really have anyone around. It’s always great to have a few athletes to just help you push on. It’s all about the time now and not so much about racing.

“I think I need to look into it, but it will probably be abroad if I do manage to find anything and then it’s dependant on what the conditions are like.

“If it’s very, very hot then sometimes it’s not worth bothering because it’s going to be a struggle if it’s in really, really high temperatures.

“So it depends whether I can find something that’s suits my objective and what my reasons are for going to do another 20K because I have done a lot of 20Ks this season.

“I definitely would like to do one, whether I can do it before September is another thing.

“I’d love to go to the World Championships, I think it would be brilliant for me to have the experience for the future more than anything, but obviously I need to get that specific time.

“The Olympics are probably more of a target because there is a little bit more time. It means I get a little bit more of the training I’ve been doing to set me up to be stronger in the second half of races, which is kind of all I need to get these quicker times.

“I’m going through the first 10K feeling really good and comfortable at a really quick pace. So it’s trying to get the training in to try and get the second half of my races stronger and quicker.

“I’ve still got that to work on in training, so I feel, with just a few more months of training, I could really get my times to go down and get higher up in the world rankings and hopefully get Olympic selection.

“I just have to look at a few things and decide what to do.”

Whatever Lewis decides, it has already been an outstanding season. Her time in Leeds was her third personal best since the turn of the year.

The 26-year-old also won the British 5K Indoor title in Birmingham and the Molly Barnet Open in Coventry which included the Race Walking Association 10K Championship.

Lewis says: “In the early part of the year I did a race in Switzerland and had a minute PB there which was a really nice start to the year. I did a race not long after that in the Czech Republic and I did another PB there.

“Then I had the European Cup where I did race well and I was strong, but in the conditions and the whole lead up to it, I didn’t compete as well as I would have liked to. But I still had a really strong race and still showed that I was in good form and then the PB in Leeds was just brilliant.”

Lewis is quick to praise the contribution of coach Jones who she has been working with for just over a year.

“We’ve been working together so well. I’ve seen a lot of progress, it’s brilliant,” she said.

“There were a lot of things to improve on, like mileage and just the type of athlete I am. I’m very powerful, so I’ve always been very good at short distances.

“It does take time and my coach keeps saying to me it’s going to take a few years, so I’m still in the early days of that procedure.

“But the amount of progression I’ve already shown and how much more comfortable I am in races has definitely shown how much I’ve improved from having a little bit of science in my programme. Chris is very clued up on how to develop a really good programme to suit me.

“I’m looking forward to see what else we can do together. It’s really exciting.”

In the meantime, Lewis has plenty to keep her occupied, especially during the recent fine weather enjoyed by South Wales.

As well as being an international athlete, she helps run the family business – the Clerkenhill Adventure Farm and Frizbee Golf Course near Haverfordwest.

“The reason I’m based down here is that I have a family business. We have a dairy farm and we also run an adventure park on the site.

“The park is a tourism business so we’ve got frizbee and crazy golf and things, so I’m very much involved in that. I’m in charge of the park side of the business, so I manage that.

“In the season, from Easter until October half-term, I’m very busy in the park and the shop so I do work in the middle of the day.”

Which means peak tourism season in work clashes with the outdoor athletics season.

But Lewis says she is happy to combine the two as the busy schedule suits her personality. “I train very early in the morning and then in the evening after I’ve finished working.

“I’m very much full time at this time of year. It’s very busy. But I enjoy that. I think it’s good for me because it takes my mind off thinking about training all the time.

“I think if I was a full time athlete and all I was doing was training, I might over train. I think I would struggle with that mentally. I love working and I really enjoy being part of the family business. It’s a busy lifestyle but it’s really good.

“I’m lucky that my parents are very good. In some respects it’s good for me, because I do work and it is very busy, but then when I do race and things they always let me go, there’s never a problem.

“So it works out better for me. It probably feels like it doesn’t, but I need the time in the winter to get all the miles in. So in some ways it is actually quite good.

“In the winter as much as I’ve got more time, I do like to help on the farm as well. That’s the type of person I am. I think I would be a little bit lost if I didn’t have anything to do, so I enjoy it and it does suit me personally.”

It certainly seems to be a winning formula for Lewis, who is part of an exciting era for Welsh women’s race walking.

Second in Leeds was Cardiff’s Bethan Davies, the British 5K outdoor champion and record holder, who competed at the 2017 World Athletics Championships in London as well as alongside Lewis at last year’s Commonwealth Games.

You can see both in action at next weekend’s Welsh Athletics Championships in Cardiff, where they will go head to head over 5k for the Welsh outdoor crown on Sunday.