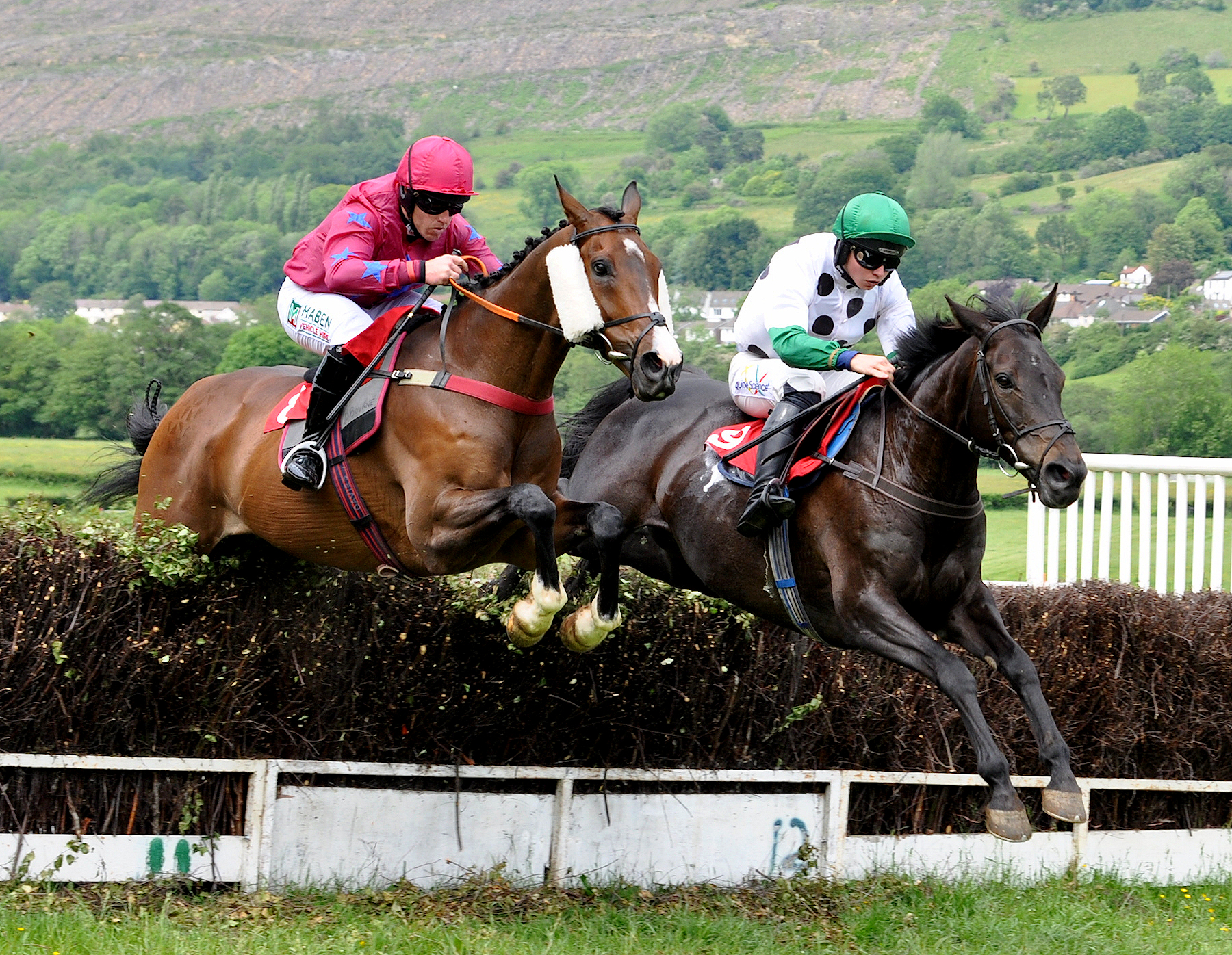 Another victory for Ben Jones and Midnight Folie (right). Chris Davies and Kings Cross to their best to thwart them in the Confined Race. Pic: Alun Sedgmore

A huge crowd turned up at Lower Machen, near Rudry, for the Tredegar Farmers Hunt Point-To-Point Steeplechases last Saturday and they were treated to an afternoon’s exciting sport.

In the opening restricted race, the legendary national champion William Biddick, on Nigel Lilley’s French-bred eight-year-old mare Silver Louna, got home by a neck from the James King partnered Airpur Desbois the only other French-bred horse in the seven runner field.

This was Biddick’s only ride at the meeting and he said on dismounting: “She’s so game and tough.”

While trainer Hannah Lewis who is based at Upton-on-Severn said: ” She’s an angel to train and she is blind in her left eye. Lower Machen is my favourite racecourse so it was super to have a win here.”

Winning owner Nigel Lilley, a popular figure for many years on the hunt-racing circuit, received many congratulations from racegoers during the afternoon.

West Wales’ Ben Jones, who is having a splendid season, made nearly all the running on the Amber Mathias trained Midnight Folie to land the confined race coming home some 20 lengths ahead of Kings Cross who was completing a five-timer.

Five faced the starter for the men’s open race and the Jonathan Phillips trained Oscar Fiain led two fences out and went on to score by six lengths from the odds-on favourite Ruperra Tom.

The ladies’ open race was a close affair with the judge Peter Thomas unable to separate the hooded Hospital, partnered by Elen Nicholas and the favourite Patricktom Boru, ridden by Jodie Hughes and who at one time on the second circuit looked as though she would score an easy victory.

Both riders said they were satisfied with the judge’s decision to give it a dead-heat and Patricktom Boru ,who was recording his 13th success, will run all going well at Stratford races on Friday.

Hughes was back in the winners’ enclosure around forty minutes or so later after she had won the young horse maiden on her father Graham Hughes’ MoreHurryLessHaste.

Trained by Kieron Price, the six-year-old bay mare who had been runner-up to Flash Klass over the course a fortnight earlier, won by a head from Epalo De La Thinte.

Shane Quinlan, from Cork in Ireland, and who has ridden around 30 winners, riding the lightly raced seven-year-old brown mare Belle Of Steel for former Welsh champion point-to-point rider Nick Williams, of Ogmore-By-the-Sea, gained a head verdict over the Byron Moorcroft ridden Long Mile Road in the aged maiden race.

Pub Lunches, who had led on the first circuit, was just a length away in third place.

Aberthin’s Edward Vaughan,aged 11, brought his total of pony race wins to 52 when winning the138 cms open race on Little Replacement and the 148 cms race on White Water.