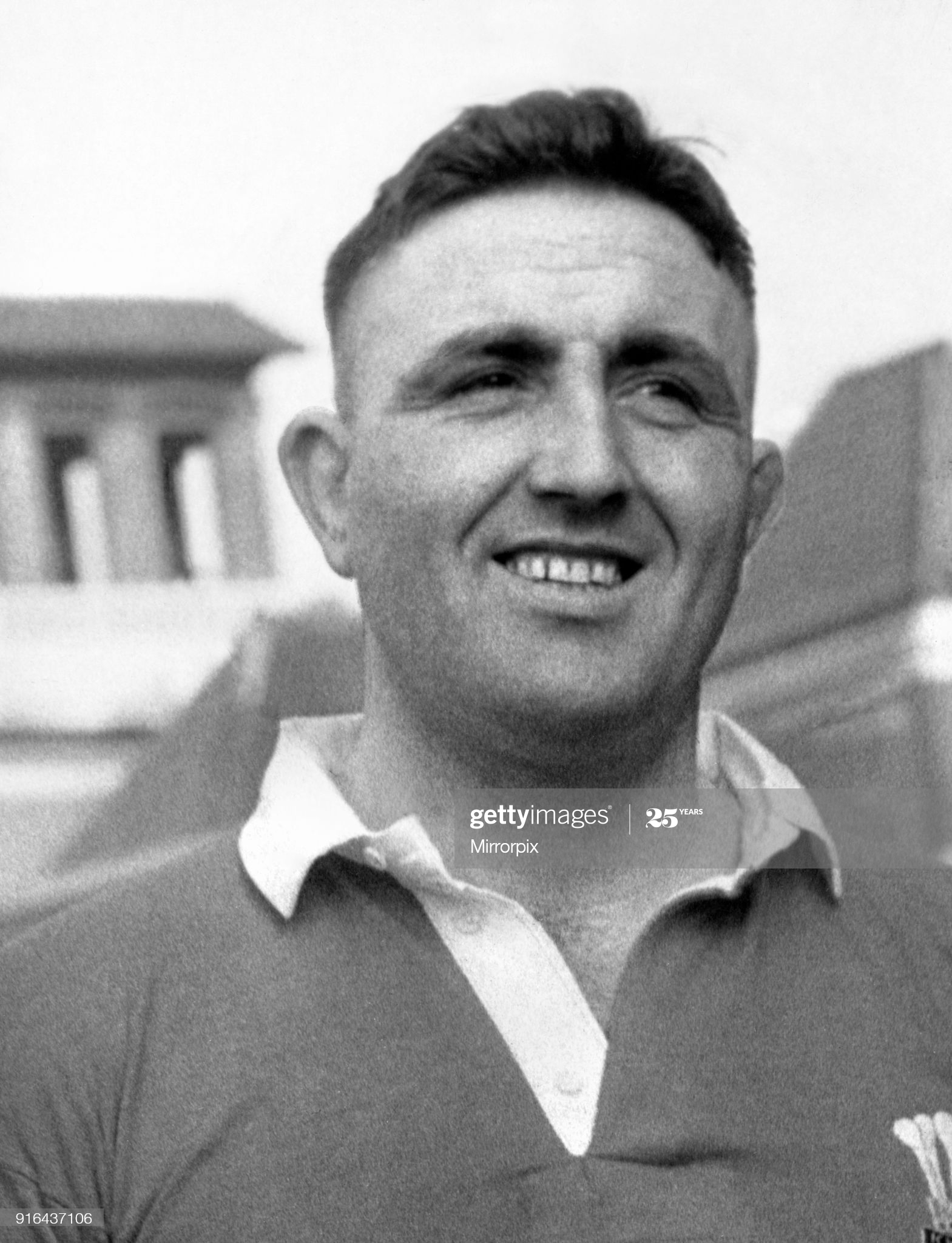 Pontypool have spoken of their sadness and devastation following the death of “the most influential figure in Pontypool RFC history” – Ray Prosser.

The former Pooler prop and coach, who also played for Wales and the British & Irish Lions, has died at the age of 93.

Simply known around the rugby world as ‘Pross’, he was one of the biggest names and characters in post-war Welsh rugby history. He won 22 caps for his country and toured New Zealand and Australia with the Lions in 1959.

But as good as he was as a front and second row forward, he was an even greater coach. Born and raised in Pontypool, he was taken to watch the club side by his father and grandfather as a toddler and fell in love with Pontypool Park.

He played for the club for the majority of his career, helped them win the Western Mail Unofficial Championship in the 1958-59 season and then took them up from the bottom of the table when he took over as coach to become the best and most feared side in the UK.

“A truly rousing forward, rich in the traditions of Valley forward play and the whimsical Welsh humour of a man who relishes life and seeks to produce only the best, on and off the field. He was a popular tourist with the 1959 Lions, a man of unquenchable spirit and unostentatious honesty, admired and respected by the tough New Zealand rugby men who ruled world rugby in 1959,” wrote Western Mail rugby writer JBG Thomas of him in 1960.

In 18 seasons in charge he steered the club to seven Whitbread Welsh Merit Table titles, five Western Mail Championship triumphs, the Daily Mail Anglo-Welsh Pennants and one Schweppes Cup final victory. He created a whole pack of forwards for the Wales team and sent seven on tours with the Lions.

Some of the statistics during his reign were phenomenal. The side of 1985-86 notched a world club record 1,607 points in the season and between September 1980 and October 1985 his Pontypool teams played 251 matches, won 214 drew six others and lost only 31 times.

They were averaging 27 points per game over that period and in winning their first 18 games of the 1985-86 season they scored 100 tries. Their ground record against Welsh opposition stretched for more than 50 matches at the time.

The news of his death was announced on the Pontypool RFC website with the following statement:

“It is with immense sadness and devastation that Pontypool RFC today can confirm the passing of the legendary Ray Prosser. Without question, Ray will be forever regarded as the most influential figure in Pontypool RFC history. We will be issuing a full tribute worthy of Ray’s incredible contribution to Pontypool RFC and Welsh rugby, but our immediate thoughts are with Ray’s family during this exceptionally sad time.”

As a player he faced the 1953 All Blacks for the Combined Pontypool & Cross Keys side in a 19-6 defeat and led the same combination against the 1957 Wallabies. That game was also at Pontypool Park and the tourists won 14-6.

His first representative honour was as a late replacement in the England & Wales team that met Scotland & Ireland at Lansdowne Road on 31 December, 1955, and his first Welsh cap came on 4 February, 1956, against the Scots.

Ray Prosser, Pontypool coach, player, Wales & Lions prop has died aged 93. The word legend is overused but not in Pross’ case. He was the architect of Pooler’s astonishing successes, the Pontypool & Wales frontrow & other top internationals. #RIPPross

Having been prominent in the three trial matches, he replaced Courtenay Meredith in the Welsh front row despite Wales having opened their Five Nations account with a win over England at Twickenham.

He went on to play 22 times for his country between 1956-61, winning 12, drawing one and losing nine. He scored his only try in a win over France in Paris and played in two of the wins that secured the Five Nations title in 1956.

His selection for the Lions tour in 1959 had a huge effect on him and moulded his coaching philosophy.

After losing his first game against New South Wales, he played in 11 games in New Zealand, including the fourth Test, and ended up on the winning side in each one of them.

“I went to New Zealand with some sort of reputation, but I was soon put in my place. I was brought down to earth very quickly. New Zealand taught me that the game is, and will always be, run and ruled by forwards,” he said in an old interview.

“My coaching views were shaped by what I saw in New Zealand and my appointment as Pontypool’s coach coincided with the arrival of some talented forwards. I did not make them big and strong, rough and rugged, it just happened.

Tales of ‘Pross’ are legendary; my personal favourite – when asked by a reporter why Pontypool favoured ‘9 man rugby’ he allegedly replied,
“Cos we’ve got a no. 8 who can’t kick!”

“To get the best out of a player he has to have the ability to run. To do that he has to train, train and train. Rugby is 80% fitness, 10% luck and 10% ability. Whether that is right or wrong, the ability to run when those you around have stopped is key.

“When I came back to the club I had the luck to meet up with Terry Cobner. We settled in together after a year or two. If there were medals to be dished out to any one man it would be him. He was a wonderful player and leader.

“And Bobby Windsor was a bit special, an absolute gem. I never saw anyone dominate a game from the hooking position like he did. He and Terry were among 10 or 12 forwards we had at the club who were as good as anyone in their own and many other eras.

“They never transgressed any more than any other team. And the Welsh selectors were always happy to put a Welsh jersey on them. They were physical players, but the game is in two parts. With forwards it is all about imposing and stamping yourself on your opposite number.

“You have to overcome him physically, you can’t talk him around. In the back play you are looking to avoid physical confrontation.”

His love of forward play made every team fear going to Pontypool Park and the world renowned Pontypool front row trio of Charlie Faulkner, Bobby Windsor and Graham Price won titles with their club, Grand Slams with Wales and played together for the Lions.

Bish just informed me of the very sad passing of Ray Prosser. There is sure to be a Statue built at Pontypool Park in his memory. An absolute Giant of a Personality whose presence will be forever missed and who will never be forgotten. RIP Ray.

When asked once about his tactics he famously replied: “We’ve got two – up and under!” There were plenty of them, but there was also huge craft in the approach of the forwards and no little try scoring ability in the backs in the sides coaching by Prosser.

“It might not have been the right type of rugby for a side with running backs. It may not have been pretty, but it was effective,” he said.

“Winning is what the game is all about. You have to have standards and I taught them to my players – it was all about playing a sound, basic game with few gimmicks.

“You will find that the best and most successful teams all play a basic game. I’m just an old player trying to do a bit to help the players who are out on the field now.

“I didn’t make the Pontypool pack. Terry Cobner created the atmosphere when he came here as captain. He’s a kindly man, a humble man and a great player. He got us off the ground and I just tried to help him.”

So many stories about Ray Prosser, revered and respected in equal measure. First interviewed him way back at the old Panteg Steelworks, he was mentor to those great forwards, cut him and he’d bleed Pontypool. Tough as an old boot, but softee to his family

Rather prophetically he predicted he would live and die in his beloved Pontypool. His garden was his haven, rugby was his lifelong passion.

“I was born and bred in Pontypool and, as a place, it has the best of both worlds. It has got industry and then a few miles beyond there are open spaces. It is a very nice part to Wales – the best part. The biggest honour that ever came my way was to wear the Pontypool jersey. It gave me more pleasure to play for Pontypool than any other team.

“When I was young the nature of the game was a rugged, violent game that didn’t require much skill. That fitted in with who I was. When I got into the game I found a wonderful spirit and camaraderie.

“The game has been good to me. I won Welsh caps, I’ve been around the world and got to be Pontypool’s coach. I was born here, have lived here all my life and will probably die here. Except for rugby I would probably never have travelled further than Barry Island.”