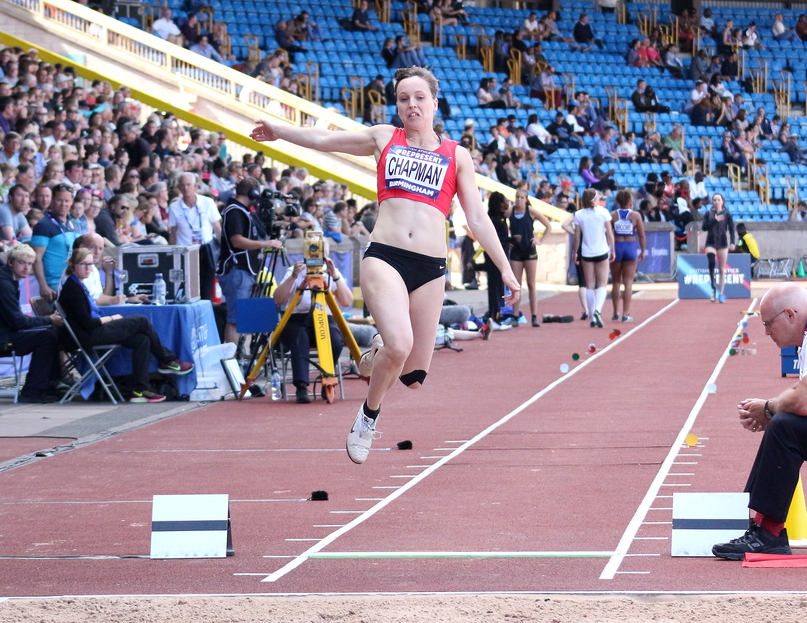 Rebecca Chapman wcould be one of Welsh athletes competing in Glasgow.

On a cold and breezy evening at the Manchester Regional Arena, the Cardiff Athletics stalwart produced a second round jump of 6.14m which was good enough to claim third place behind Abigail Irozuru and champion Jazmin Sawyers.

Chapman has struggled with illness and injures since winning a silver medal with a personal best of 6.54 at the 2017 British Championships and representing Wales at the Commonwealth Games the following year.

But the multi-talented athlete returned to form last month when she jumped 6.51 in Bournemouth, and she continued that kind of form in difficult conditions in the shadow of Manchester City’s Etihad Stadium.

Fellow Welsh athlete Sarah Abrams, of Blackheath, finished fifth with a best jump of 6.07m in the fourth round.

In an extremely close run final, the Cardiff Athletics youngster produced an excellent performance to finish fifth in a season’s best time of 10.51 as Harry Aikines-Aryeetey took the title in 10.35.

Azu qualified for the final thanks to a second place finish in his heat clocking 10.59, followed up by third place in his semi-final where he clocked 10.56.

The Deeside athlete was delighted to be back in action in a proper throwing circle after lockdown.

“The season’s best is nice and after a time where you are not allowed to throw and not really having a proper circle, it is amazing. Sometimes, you can’t have the biggest throws.

“The last six months have been really hard, not being allowed to do what you want to do – like go out into the circle and throw.

“Not being able to do competitions, it has put me down but, knowing there are still opportunities ahead has kept me going.”

The Leeds City athlete took up the pace around the 1,000m mark after a slow start to the race and stayed in the lead until just before 4,000m mark before she was overhauled and eventually finished sixth behind Blackburn’s Jess Judd, who claimed gold.

Cardiff Athletics’ Rhiannon Linnington-Payne booked her place in Saturday’s 400m final by qualifying as one of the fastest losers after finishing fourth in her heat in a season’s best time of 54.85.

Swansea Harrier Joe Brier booked an automatic place in the men’s 400m final by finishing second in his heat to Alex Haydock-Wilson in a time of 47.18 after leading for much of the race.

In the same heat, Brier’s Swansea team-mate Steffan Dylan Jones missed out on qualification but enjoyed the consolation of dipping under 48 seconds for a new PB of 47.97.

The 2011 World 400m hurdles champion Dai Greene, of Swansea Harriers, was a late withdrawal from the men’s 400m hurdles heats.

However, fellow Welsh 400m hurdler Lauren Williams was in action and earned automatic qualification for Saturday’s final with a third place finish in her heat with a time of 59.47.

Brighton’s Beth Kidger booked her place in the women’s 1500m final as one of the fastest runners-up when she placed fifth in her heat in 4:19.27.

Cardiff’s in-form James Heneghan will line up in the men’s equivalent on Saturday after finishing fifth in his heat, clocking 3:49.00.

Clubmate Lizzie Harris narrowly missed out on a place in the 800m final when she finished fourth in her heat in a time of 2:09.72.

Cardiff clubmates Dewi Hammond and Joshua Brown reached the semi-finals of the 100m, where they finished sixth and seventh respectively in the first semi-final, while Swansea Harrier Daniel Beadsley finished fifth in his semi-final in a time of 10.73.