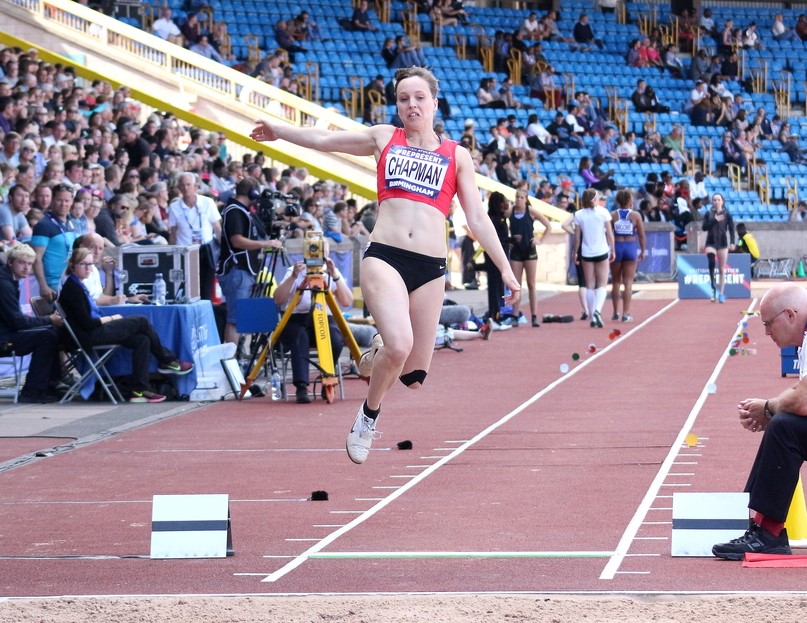 The Cardiff AAC athlete produced one of the individual performances of the day to break Ruth Howell’s 40-year-old Welsh Athletics Championships record by one centimetre.

Chapman leapt out to 6.34m to clinch gold at Cardiff’s International Sports Campus. Sarah Abrams was second with 6.08m, while Grace Morgan, of Cardiff Archers was third with 5.41m.

Another Commonwealth Games athlete, Bethan Davies, who won bronze on the Gold Coast, and gold at the recent British Championships in Birmingham, was in excellent form once again on Saturday.

Truro College student Swan’s first event was the shot put and his second round effort of 15.14m was enough to give him the title ahead of Newport Harrier Daniel Cork with 15.09 and Charlie Goodwin (F38), of Lavington Athletics, with 8:38.

In the final field event of the day, the men’s discus, Swan then claimed his second gold with a throw of 44.99m. Harrison Walsh (F44), of the DSW Para Academy, claimed silver and a big personal best with 44.07m. Cardiff AAC decathlete Harry Hillman was third with 34.19m.

On Friday night, Nicoll had won the women’s discus with a throw of 44.84.

And she was back in action on Saturday afternoon to claim the shot put title with an effort of 14.97.

Deeside AAC’s Sabrina Fortune (F20) claimed the silver medal with a personal best of 13.70m, while Lucy Griffiths, of Cardiff AAC was third with 12.55m.

Saturday was a special day for the Brier family. In the morning Joe Brier helped the Great Britain 4x400m team reach the World Junior Championship final in Finland.

In the afternoon big sister Hannah took centre stage by regaining the Welsh 100m title she last won in 2016.

The Wales Commonwealth Games sprinter took gold in a time of 12.06 from Shannon Malone, of Loughborough Students AC, who claimed silver in 12.11. Wrexham’s Amy Odunaiya won bronze in 12.36.

There was a clean sweep for Cardiff AAC in the men’s 100m final when Joshua Brown claimed gold in a time of 10.87, just edging out Jeremiah Azu, and Arron Owen claimed bronze in 11.22.

Ieuan Thomas, of Cardiff AAC, followed up his silver medal in the 3000m steeplechase at the British Championships by winning gold in the 1500m.

Thomas, who is heading to the European Championships in Berlin next month, won in 3:46.44, finishing ahead of clubmate John Cove, who clocked a personal best of 3:47.47. Pembrokeshire Harrier Matthew Williams won bronze in 3:55.60.

There was a big personal best for Swansea Harrier Lauren Williams in the women’s 400m as she claimed the title in 55.35. Olympian Seren Bundy Davies, who is returning from injury, claimed the bronze in 55.44.

Cardiff AAC’s Owen Smith convincingly defended his 400m. His winning time of 47.32 was exactly a second ahead of clubmate and  400m hurdle specialist Paul Bennett. Swansea Harrier Rhys Granville was third in 49.96.

Amman Valley Harrier Jade Williams followed up her silver in the 1500m by going one better in the 800m final. The former champion regained her title in a time of 2:07.86.

Birchfield Harrier Heather Paton was an impressive winner of the 100m hurdles in a time of 14.14, ahead of Cardiff AAC’s Lauren Evans who clocked 14:86 to add a silver medal to the gold she won in the high jump the previous evening.

Amy Odunaiya also claimed her second medal of the championships when she followed up her bronze in the 100m by grabbing gold in the 200m.

The Wrexham AAC athlete clocked 24.66 to finish ahead of Caitlyn Mapps, of Cardiff Archers in 24.68. Bethan Wakefield, of Bristol and West AC, claimed bronze in25.51.

Kristian Jones, of Cardiff AAC, rounded the day off on the track by winning gold in the men’s 200m final in 21.72. Lemarl Freckleton, of Swansea Harriers, claimed silver in 22.20 and Arron Owen, of Cardiff AAC, won bronze in 22.81.

Cardiff AAC enjoyed a one-two in the men’s high jump where Jonathan Bailey just missed out on going over two metres, registering a best of 1.99m. William Edwards was second with 1.96 and Swansea Harrier Iwan Beggs, who also celebrated a personal best of 1.92.

In the women’s pole vault, the Welsh title was comfortably won by Cardiff AAC’s Megan Hodgson, who cleared 3.45m. Ffion Llewellyn, of Bridgend AC won silver with 3.15m and Cardiff’s Lois Hillman was third with 3.15m.

Richard Tsang, of Birchfield Harriers, won gold in the long jump with 6.77m, from Kingston AC and Poly Harriers’ Chris Hall with 6.59m and Wrexham’s Thomas who added bronze to his triple jump gold with 6.53m.