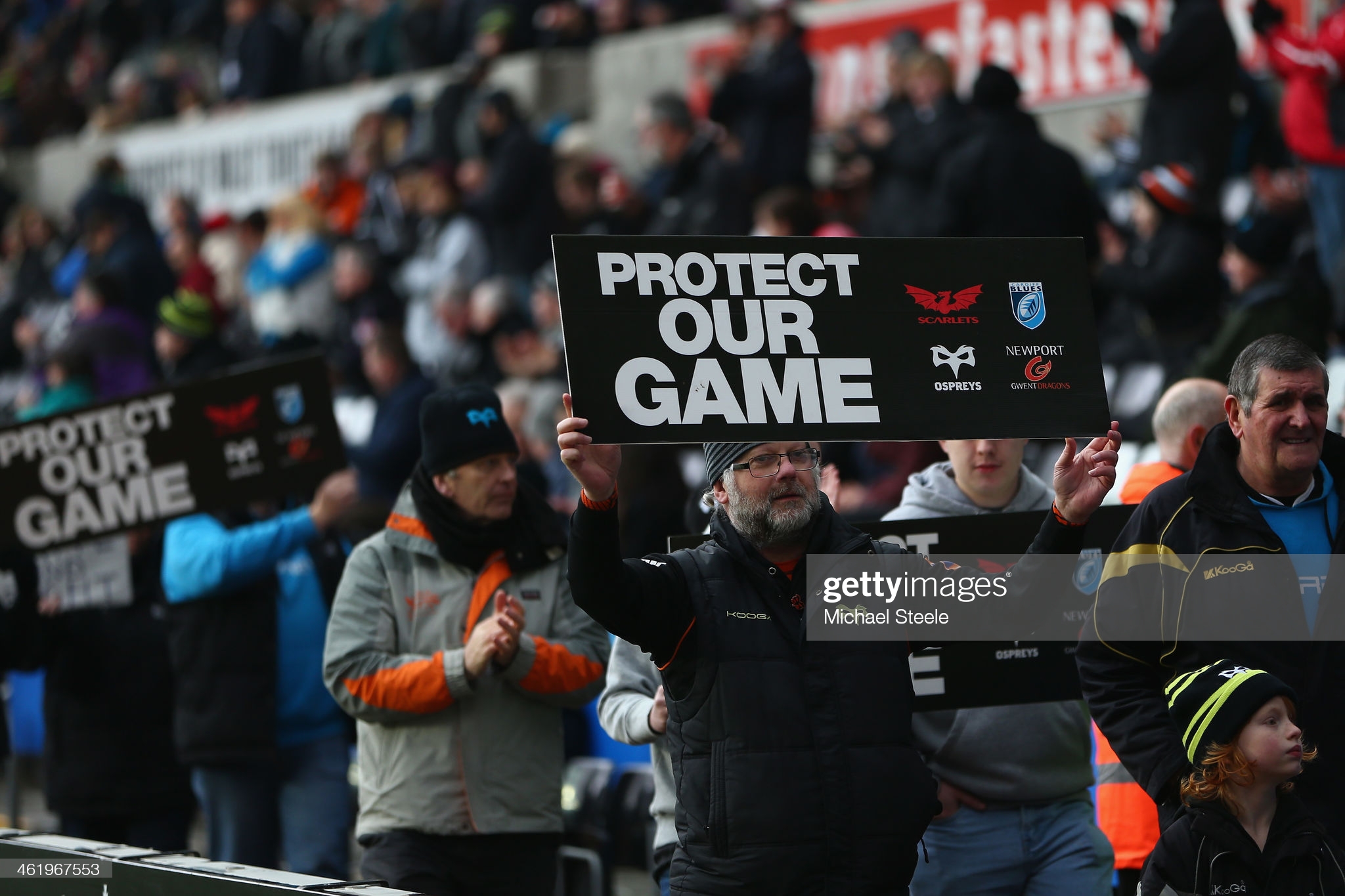 The Joint Supporters Group representing fans of the four regions have revealed they have been waiting for a meeting with the Welsh Rugby Union for seven months.

Responding to the revelation that the WRU are considering a proposal to cut the number of regions from four to three, the JSG have claimed the culling of one of their teams may be behind the long delay.

Writing on Twitter in reply to a story in The Times that reveals the reduction proposal, the JSG state: “As we’re still waiting for the date of our next meeting with the Welsh Rugby Union, the news item below may explain why we are still waiting, 7 months after the original timeframe.

“We urge the Welsh Rugby Union to confirm the date of the meeting without further delay.”

The JSG was formed after the Union’s last doomed attempt to reduce the number of regions to three back in 2019.

As we're still waiting for the date of our next meeting with the @WelshRugbyUnion, the news item below may explain why we are still waiting, 7 months after the original timeframe.

We urge the @WelshRugbyUnion to confirm the date of the meeting without further delay. https://t.co/zBM7Uhfy2o

It consists of representatives of the official supporters groups of the Scarlets, Ospreys, Cardiff and Dragons and last met with WRU chief executive Steve Phillips and other Union officials a year ago.

The demand comes after they learned for the first time on Wednesday evening of a Union plan in a commissioned report to shed one of the regions.

Cardiff, Dragons, Ospreys, and Scarlets have struggled for success over several years with crowd numbers dwindling.

All four sides have posted significant losses, which have been exacerbated by the Covid pandemic, while they have been saddled with a collective £20 million bank loan that will have to be paid back over 20 years.

The options on the table — all of which are likely to meet significant opposition — are axing either the Ospreys or Dragons, or an Ospreys and Scarlets merger.

It really is pretty remarkable that the WRU got a nearly £100m windfall from CVC for the 6N and URC, didn't pay the pro clubs in 2020-21 and in fact saddled the pro clubs with a £20m loan to cover the WRU's obligations, built a hotel and then proposed closing one of the four down

The WRU recommendations come following a report from consultants Oakwell Sports Advisory and will be put to the Professional Rugby Board – the body that runs the professional game in Wales – at their next meeting on May 11.

Phillips will put forward a long-term funding model based on supporting three teams. At present the professional sides receive £23.5m between them which is set to be cut to £18m in the 2023-24 season.

With the Irish Rugby Union spending between 50m-60m Euros on its professional game, and the Scottish Rugby Union investing £20m into both Edinburgh and Glasgow, the Welsh sides are set to fall further behind their rivals in Europe, and the United Rugby Championship.

Meetings have been taking place with the WRU, and newly appointed PRB chairman Malcolm Wall over the future direction of professional rugby in Wales.

The proposals are creating a toxic environment within Welsh rugby with each professional side reluctant to fall on its sword, but there is an acceptance across the board that things have to change following a Six Nations campaign which resulted in Wales losing to Italy at home for the first time in their history.

The regions have unequivocally worked if you take their sole aim as being producing players for Wales. Getting rid of 1/4 of those in the name of ‘competing’ when combined budgets of the Ospreys & Scarlets is still around half of what a Racing or Toulouse spend is short-sighted. https://t.co/tuqiqRYMwC

If a professional side was to be cut then the player pool would be reduced to 135, which is a long way behind the 215 professional players in the Irish system, and the 238 in New Zealand.

It would be the second time in the chequered 20-year history of regional rugby a team will have been axed. Former Chief executive David Moffett carved nine teams into five in 2003 before moving down to four a year later.

A proposed merger between Ospreys and Scarlets two years ago ran into ferocious opposition and was ultimately shelved.

There is also set to be a change in how Wales’ professional players are paid. Presently, the WRU pay 80 per cent of the salaries of the top 38 players in Wales with their regions taking on 20 per cent of the wage.

The Oakwell report has suggested creating a new agreement which would entail creating a Welsh Elite Player squad, similar to the model undertaken with the Rugby Football Union’s EPS, with the WRU paying its professional sides for the services of their players.

FWIW, going to three pro sides in the current governance structure would be pointless as you’d just have three under-funded sides instead of four.

While the tail that is the community game continues to wag the dog then the whole game in Wales continues on a slide to death.

“Welsh rugby is heading into the abyss,” said a high-ranking Welsh rugby figure who did not want to be named.

“The game in this country is at a crossroads following what has been a terrible Six Nations campaign. For too long Warren Gatland papered over the cracks in the overall game in Wales with success at Test level, but the rot has finally spread to the national side which is the only reason the WRU are planning to do something drastic.

“There’s enough money in the game in Wales to have four competitive professional sides but the WRU’s answer is not to invest in the game but to build a hotel and potentially cut a region.”