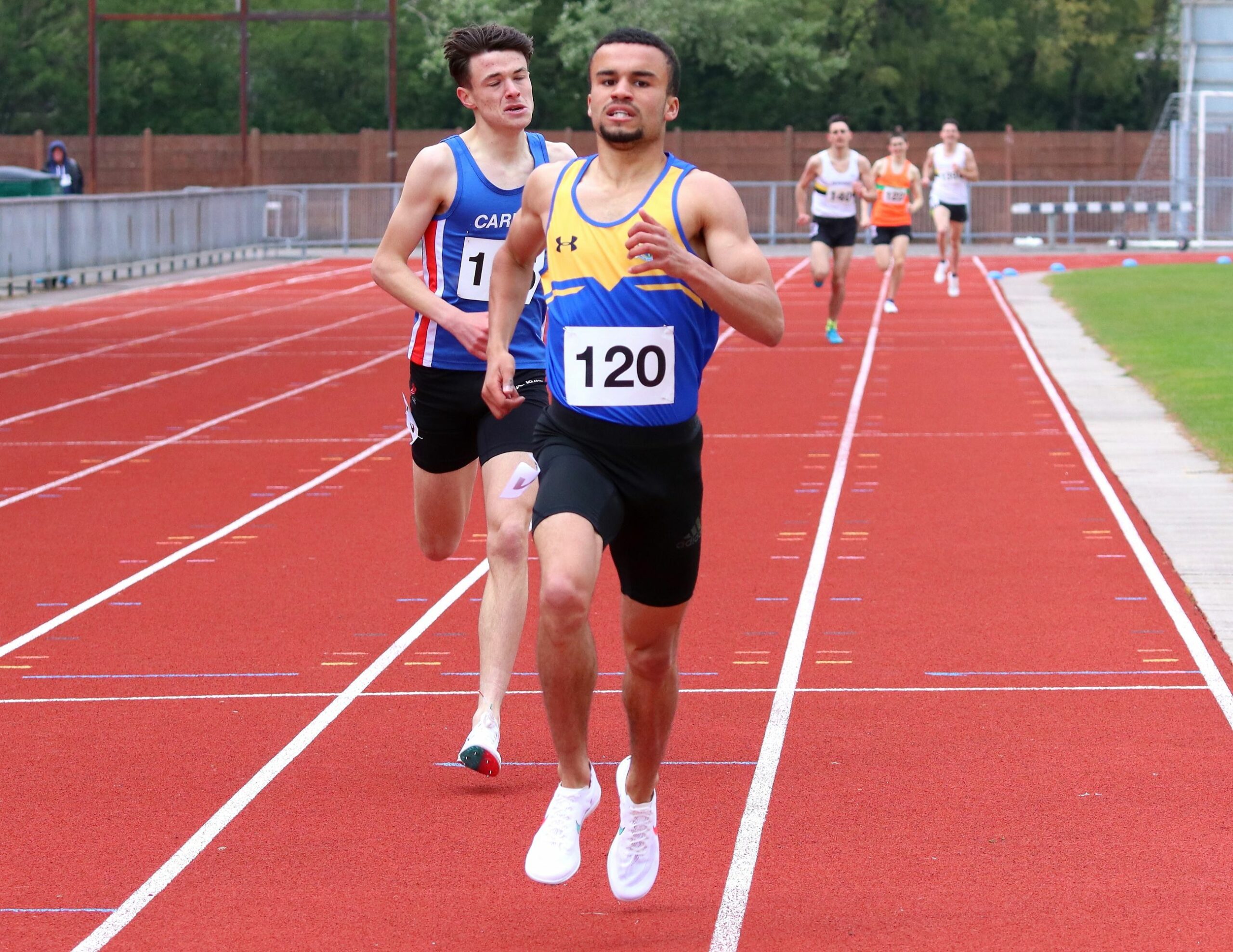 Newport Harrier Remi Adebiyi procuded an excellent run to win the under-20 and senior 800m on his home track on Saturday. Pic: Owen Morgan

Remi Adebiyi and Lauren Cooper produced two of the standout performances at the Welsh Athletics Track Invitational in Newport on Saturday.

European Under-23 Championship hopeful Adebiyi ran a personal best in the 800m, while Cooper ran a fast 3,000m as she chases her double ambition of breaking the Welsh steeplechase record and claiming a Commonwealth Games spot.

Running on his home track at Newport Stadium, Adebiyi sliced a second-and-a-half off his PB as he won his 800m race in a time of 1:52.88, ahead of Cardiff’s Ben Reynolds.

Two years ago, the Bath University student represented Great Britain at the European Under-20 Championships in Sweden, where he finished 12th in the 3,000m steeplechase.

But this time he is targeting his favoured 1500m distance as he tries to earn a place at July’s European Under-23 Championship in Norway.

After leading from gun to tape on Saturday, Adebiyi said: “The conditions were a bit windy . . . typical here! It’s my home track so I know the ins and outs. I was happy with the race though.

“I was going to attack it today to see what would happen. I think I ran 1:52 so a little personal best. The last 200 was hard, it was into the wind and hard to concentrate. I was trying to keep my form knowing someone’s chasing me down.

“The target this season is European under 23s, I think I’m going for the 1500 this year rather than the steeplechase, so I’m chasing that time down.

“It’s pleasing because my first race of the season was a personal best in the 1500m of 3:44. I’ve still got three seconds to chase down because the standard’s 3:41.

The win was the next step of Adebiyi’s preparations for the European Championships Under-20 and Under-23 Championship trials in Bedford next month.

The Newport Harrier said: “I feel confident that I can get underneath the standard. I back myself, and I back my speed in the trials.

“The trials will be a slow tactical race. There’ll be like five or six people battling for three spots so no one wants to be picked off at the end. I’ve got to stay in tip top condition for that.”

Explaining why he was targeting the 1500 rather than the steeplechase this time around, Adebiyi said: “The steeplechase last year wasn’t convenient because of COVID restrictions.

“But I managed to get a quick 1500 in at the end of season. That’s really what spurred me to think I could get the European standard this year and qualify.”

Commenting on training through lockdown, the 20-year-old said: “It’s been alright I’m lucky to have a golf course not far from my house so I was doing a lot of on the golf course.

“So yeah, that built my strength and endurance. I managed to get a few races in at the end of the season and finish the season strong, even though there were no races for the first three or four months of last summer.”

Another athlete who has had to adapt due to the COVID restrictions is Parc Bryn Bach steeplechaser Cooper, who was the first woman home in the mixed 3,000m race won in impressive style by Cardiff Athletics youngster Ben Miles in 9:05.25.

Cooper, who was fourth in the 3,000m steeplechase at last year’s British Championship, clocked 9:45.39 on Saturday as she tries to build her form following the disruptions of COVID.

Cooper said: “It’s great to be back and nice Welsh Athletics have organised something like this. It’s nice to go back to a bit of normality.

“It was a bit windy out there. Especially over the longest stuff, you lose concentration a bit. I’ve just looked at my splits back and my middle k was just completely off it! For the time in the season, I’m relatively happy with that.”

Despite being a Welsh international, Cooper was not on the list of athletes considered to be elite and eligible for access to track facilities during lockdown.

“I was just under the cut-off, so I’ve been doing a lot of road training, solo training,” said Cooper.

“I’ve only really been back on the track the last three or four weeks – it’s a bit different from running on the grass! But yeah, it’s really nice to be back. It would have been good to have that support, but I think I’m quite lucky as a distance runner that you can’t just go out and run.

“It’s not like the specialist events which have had no access to their long jumps or high jumps, although it’s a bit difficult because I’m predominantly a steeplechaser.”

Cooper will now concentrate on her technique over the barriers as she tries to build the steeplechase form which has seen her come within two-and-a-half seconds of Jade Williams’ Welsh steepechase record of 10:25.03.

A place on the Welsh team for next year’s Commonwealth Games in Birmingham is also a target.

Cooper says: “I’ve had a week or so over the barriers, but I’m not ready to come back to that sort of elite competition in the steeplechase yet.

“I haven’t water jumped since September, so it’s nice to be getting the legs ticking over a bit, but I think I need more access to the track before I think I can come back to the steeple.”

Listing her targets for the season, Cooper said: “Definitely the Welsh record in the steeplechase. And I was really close to a medal in the British champs last year, so that’s something else.

“There’s an outside hope of the Commonwealth qualifying standard. So I’m getting used to running that sort of pace over the flat and then see whether I can replicate that in the hurdle.

“So that’s the big dream, whether or not I’ll have enough competitions to get to that stage, we’ll see.”

Saturday’s event was the latest organised by Welsh Athletics as the sport begins to return to something approaching normality.

Although strict restrictions were still in place, there was a larger number of athletes competing across a range of age groups from under-15 to seniors over distances spanning from 300m to 3000m.

One of the closest finishes of the afternoon saw Carmarthen Harrier Dafydd Jones win his senior and under-20 1500m in a new PB of 4:03.68 just ahead of Cardiff’s Jacob Reynolds.

Earlier in the day, Charlie Hurdman, of Cardiff Athletics, clocked a personal best of 4:24.00 in an impressive win in his under-15 and under-17 1500m race.

Full results from Saturday’s meeting can be found on the Welsh Athletics website.