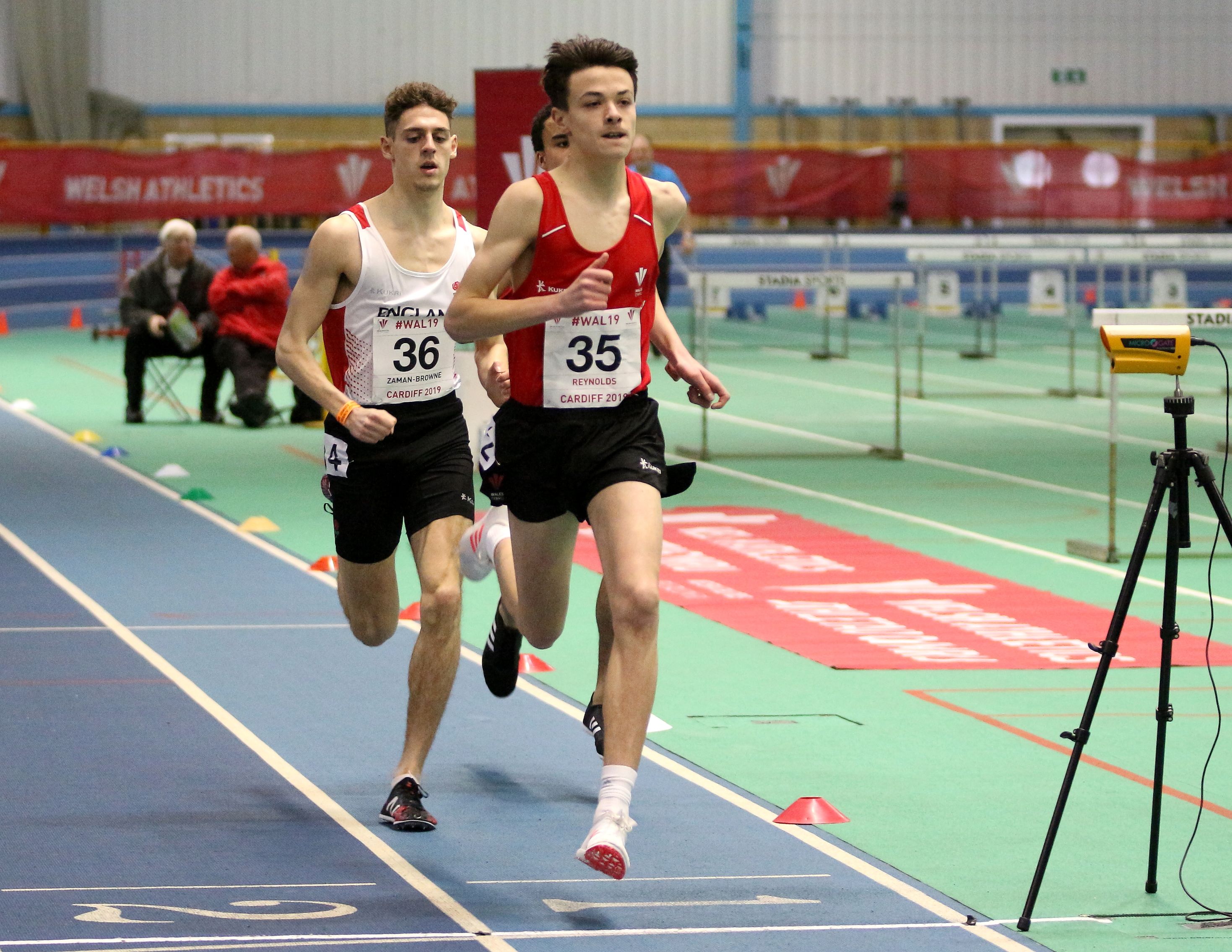 Ben Reynolds claimed the under-20 800 and 1500m double, a feat matched by brother Jacob in the under-17 category.

The Cardiff Athletics middle distance runners each claimed the 800m and 1500m double in their respective age groups during the two day championships at the National Indoor Athletics Centre at the weekend.

First up, younger brother Jacob won the under-17 800m title in 2:00.72 ahead of Swansea Harrier Charlie Holland on Saturday morning.

Not to be outdone, Ben responded by winning the under-20 title just a few minutes later when he clocked 1:56.24 ahead of Cai Morgan Roberts, of Menai.

The following day, the brothers repeated the feat in the 1500m, this time both also beat the championship best records for good measure!

Jacob won the under-17 title by shaving over half-a-second off the 13-year-old existing championship best when he claimed gold in 4:05.34 ahead of Cardiff Archer Rhys Hardman, who clocked a PB of 4:07.70.

In the very next race on track, Ben continued the sibling rivalry by winning the under-20 title in a new championship best time of 3:56.09 to break an eight-year-old record.

The Reynolds brothers didn’t have a monopoly on the middle distance doubles.

And the following day, Lyons repeated the feat in the under-17 1500m final, which she won comfortably from another Cardiff athlete, Gwenno Goode, in a time of 4:42.28.

There was an equally impressive double over the sprint distances during a high quality weekend of athletics, which featured more than 400 of Wales’ finest young athletes.

Zachary Price blasted to impressive golds in both the 60m and 200m. In the longer distance the Menai athlete claimed the under-20 title in a time of 22.64, ahead of Cardiff’s Alex Azu, who chalked up a PB of 22.75.

The under-20 60m final the following day saw seven out of the eight finalists claim PBs.

Once again, Price led the way, taking gold in a time of 7.00 secs, ahead of Swansea Harrier Thomas Payne, who registered 7.04.

The women’s under-20 60m title was taken by Emanuella Kone, who edged out her Cardiff team mate Issie Tustin with a winning time of 7.68.

Mapps was another athlete to claim double gold on the track with a win in the 60m hurdles.

There were also a number of outstanding multi-medal-winning performances by individuals who excelled across both track and field disciplines.

Carmarthen Harrier Jessica Lee won gold in the under-15 200 metres on Saturday with a winning time of 26.00, before going on to add to her title tally on Sunday by winning the 60m gold in 7.96 and the long jump with a leap of 5.37m.

Club mate Osian Roberts also showed his versatility by setting a new championship record in the under-15 high jump where he raised the bar to 1.88m to claim gold. The youngster also won the 60m hurdles in 9.22.

There was a brilliant performance in the under-17 pole vault where Isabel May Thomas produced a new championship best performance and Welsh age group record when she cleared 3.75m.

The under-20 men’s pole vault witnessed a thrilling competition where Cardiff Archer Mark Mellor edged out Swansea Harrier Ieuan Hosgood, who had claimed the silver medal at the Welsh senior championships the previous week.

Both athletes registered a height of 4.25m, but it was Mellor who claimed the gold on countback.

Full results from across all the age groups, ranging from under-13 to under 20, can be found on the Welsh Athletics website.