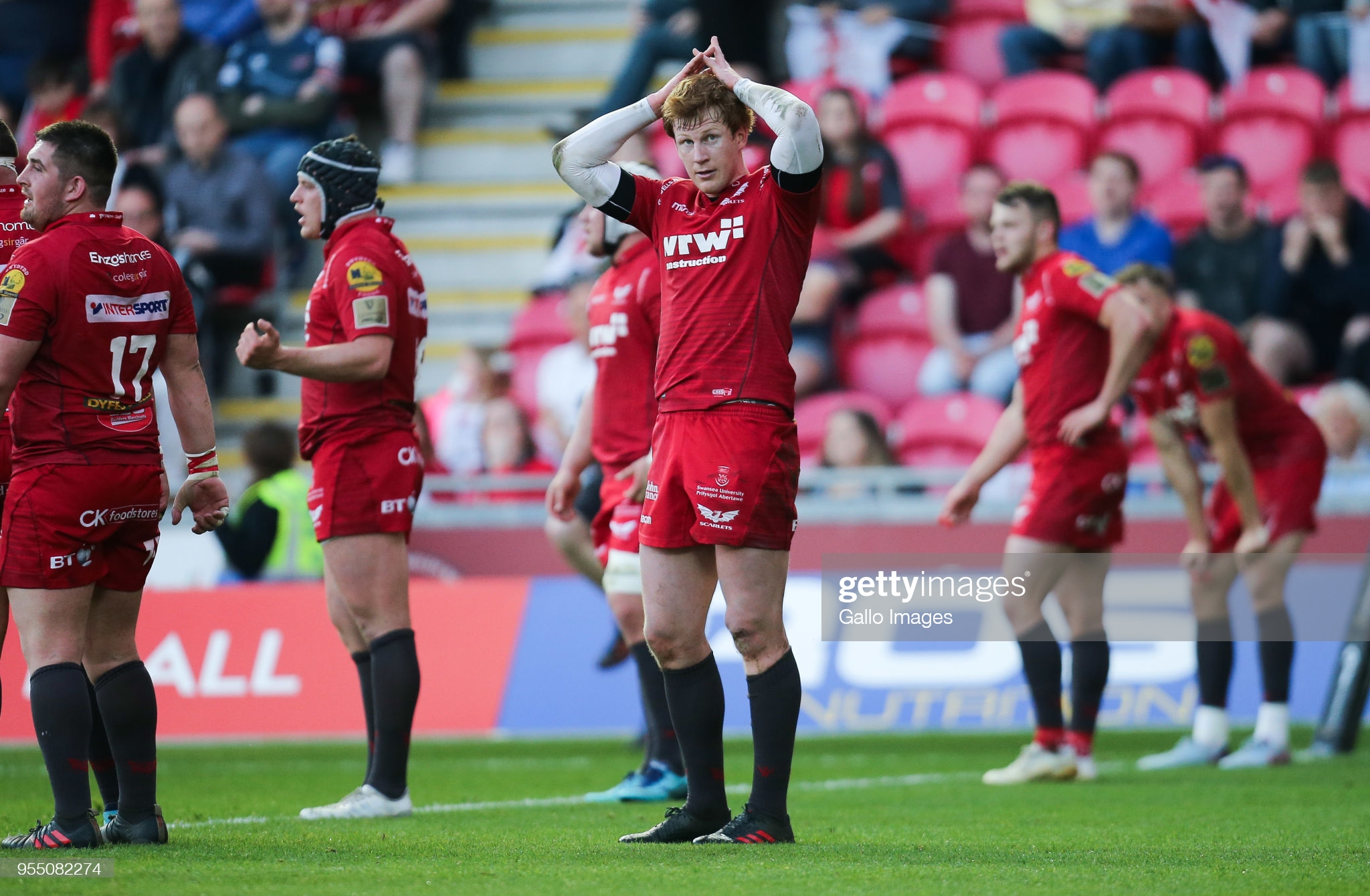 The Scarlets can come close to clinching a Heineken Champions Cup place for next season if they beat Connacht tonight at Parc y Scarlets. It was to have been a comeback game for Rhys Patchell, but the Wales international has a fresh injury, to the disappointment of Dan Jones as he told Graham Thomas.

Dan Jones admits Rhys Patchell has “been through hell” and has plenty of sympathy for his Scarlets No.10 rival now Jones has suffered the misery of a concussion injury himself.

Jones has the starting spot when the Scarlets hosts Connacht on Monday night in the Scarlets’ final match of the regular Guinness Pro 14 season.

In a match that is live on S4C, the Scarlets must win with a bonus point to knock Cardiff Blues out of the running for Heineken Champions Cup qualification and set Edinburgh a daunting target of 15 points from their three remaining matches.

Patchell had been vying for a return but a hamstring injury picked up in training on Saturday means his comeback plans are yet again on hold.

The return of Patchell would have been a significant boost for the Scarlets – and for Wales in the longer term – as the 27-year-old has not played since suffering concussion playing against Scotland back in October.

That setback immediately followed a serious 11-month shoulder injury and Jones says: “Patch has gone through hell with his injuries.

“He’s remained positive through it all, more positive than I think most players would have been, given all he’s gone through.

“Patch is a quality international player. He drives up standards – not just for the number tens, but for the whole squad because he demands a lot of the players.”

There has been little joy for Patchell since he took a blow to the head after coming on as a replacement against the Scots five months ago.

Even during that time the momentum for more safeguards against long term brain injuries has gathered pace with Wales flanker Josh Navidi, among others, backing the group Progressive Rugby in their campaign for more protection.

Remarkably, Jones had not suffered a concussion injury in his career until two weeks ago when the 25-year-old took a blow that forced him off during the win over Edinburgh and ruled him out the following defeat at Munster.

“Touch wood, I’ve been fairly lucky with my injury record. This was my first concussion and it wasn’t very nice.

“I spoke to a few players that are currently out, or have had it before, and asked their advice. That helped me massively.

“It’s such a strange thing. It came on quite slow. It did worry me a bit, but everyone here has helped me through it.”

Jones admits there was no mystery to how he suffered the blow and it was not the result of foul play, but purely a mis-timed tackle on his part.

“It was just bad technique – head the wrong side, eyes looking down towards the floor. It was my own fault,” he admits.

With support from the Scarlets medical staff, Jones – a steady and reliable guiding hand for his region throughout this season – has recovered full fitness.

“I think my own season has been a bit of a mixed bag. I’ve had the support of the coaching staff who have given me the reins to take this team forward.

“But we have probably been inconsistent. For myself, there have been aspects of my game I’ve been happy with, but there is always room for improvement.”

The Scarlets beat Connacht 20-14 in Galway back in November and although a repeat of that scoreline might be enough to secure third place in Conference B, a bonus point would almost certainly close the door on Edinburgh.

A place in Europe’s top tournament would represent a decent return from a disrupted league campaign, but Jones has warned that Connacht – a perennial thorn in the flesh for those who take them lightly – will be no pushover.

“That have improved massively since we last played them,” he says.

“They have brought an edge to their defensive game. We know we have areas in which we need to improve after our loss in Munster and we know this is a must-win game.

“But we are looking forward to the challenge and being able to put the stamp on another season of Champions Cup rugby.”

Live coverage of the Guinness PRO14 rugby match between the Scarlets and Connacht, from Parc y Scarlets. K/O 8.00.