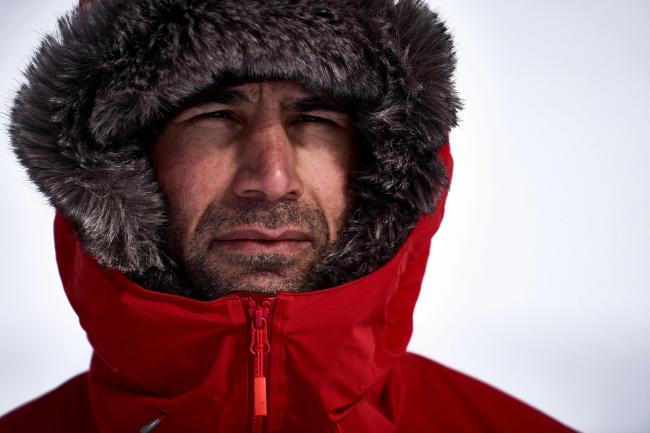 Struggling with self-isolation? Finding the couch – with only Netflix, WhatsApp and Zoom for company – a challenging environment? Fear not, because help is at hand. The Isolating King Richard Parks tells Rob Cole how to get properly in the zone.

Richard Parks knows a thing or two about self-isolation and is probably the least concerned of anyone right now about being alone.

After all, this time he can do it with his wife, Jo, and son, Fred, whereas earlier in the year he was out on his own for 28 days trekking across Antarctica.

His latest trip is his fourth to the South Pole, where he has skied solo, unsupported and unassisted for 2,299 miles over six lonely months.

That was nothing unusual for someone who loves to push himself to extreme limits.

In 2011, he completed a pioneering seven month race to climb the highest mountain on each of the world’s continents and venture to The South and Geographical North Poles.

His 737 Challenge was completed on 12 July after he had climbed Mount Vinson, Aconcagua, Kilimanjaro, Carstensz Pyramid, Mount Everest, Denali and Elbrus, as well as reaching both Poles.

So, who better to ask for advice on how to deal with potential solitude and loneliness than one of Britain’s most recognised, respected and successful adventurers.

Two months ago he just missed out on the world record for crossing the South Pole, merely having to content himself with lowering his own British mark to 28 days, 21 hours and 59 minutes for the 1,130 kms.

It was the second fastest time in history.

His latest achievement was due to be recognised at the Wales v Scotland Six Nations match in Cardiff, but that became another casualty of the coronavirus.

Capped four times by Wales as a flanker, it was due to be an emotional homecoming following his return after completing his journey on 15 January.

“I put in two years of planning into my expedition and I knew what I was getting into. I was physically and mentally adjusted and prepared, which is certainly not the case with the situation we all find ourselves in at present,” said Parks.

“I always talk about the three phases of any solo expedition when I’m trying to explain how I get through it – Storming, Norming and Performing.

“In Phase 1 your emotions are volatile, you get pretty emotional and negative thoughts creep into your mind.

“It is a transitional period that lasts for a week to 10 days. You just have to weather it, stay focused and move on.

“Having earned the right to be in the fight, things then become slightly less challenging. You enter a period of normalisation. You’ve become used to your environment, you’ve got into a routine and you’ve made progress.

“Once you’ve found what works for you, everything becomes easier. After another week or two you graduate to Phase three.

“In this phase everything works like clockwork because you have a strict routine. On an expedition it feels as though you have surrendered yourself to the goal and you almost become weightless.

“You find yourself doing things automatically. We aren’t there yet as a nation, we are currently trying to adjust, trying to make sense of what is going on, but we will get to that stage.”

When he is on an expedition, the 41-year-old Parks uses what he describes as ‘my daily maps’. These chart his course for the day from what time he gets up, when and what he eats and for how long he will ski.

Fighting for survival, as well as striving for a world record, is key critical when you spend three days in blizzards and have to suffer wind chill temperatures of -44 degrees. That’s when daily routine becomes a comfort, rather than a chore.

“Routine is critical in managing your mental health, as well as your time on any project. I was working in 24 hour sunlight, but having to live by my daily schedule – up at 5.00am, spend an hour melting snow to feed myself, ski for 70 minutes, take a five minute break and then repeat until 7.00pm.

Visit Wales. Later. …great line! Ha!
I miss the #outdoors but nothing is more important than looking after each other.

Thank you to all the inspirational #NHS & #keyworkers who are on the front line during #CoronaLockdown #StayatHome #staysafe #visitwaleslater https://t.co/otLmo8YTFP

“My daily maps helped to keep me sane and I’m now creating a new sort of routine for myself at home. Once we’ve all adjusted to our new circumstances we all have to find a new rhythm and pattern to our lives.

“We need a daily structure for our well-being and we have to identify what we can control. There is no point stressing about what you can’t control.

“For instance, the gyms might be closed, so why not dust off the running shoes and go for a walk or a run. If you can’t see parents or grandparents, set up a Skype account or WhatsApp group to keep in regular contact.

“Being on your own and being alone are two different things. The big motivator for me when I was in Antarctica was that I had a big group of people who had worked so hard to get there there. I didn’t want to let them down.

“I also had a phone with which I could contact the outside world in an emergency. At times I felt on my own, but I had some visual reminders of home with me that ensured I was never alone.”

After injury cut short his professional rugby career in 2010, Parks began to find other challenges with which to fill his life. In 2011, he successfully became the first person to climb the highest mountain on each of the seven continents and stand on the North and South Poles in the same calendar year.

That was an achievement recognised by Guinness World Records, while in 2014 he set his first British record for skiing coast to pole in Antarctica, solo, unsupported and unassisted.

“I am still processing things after the trip,” said Parks, who lost 18 kgs over the 28 days. “I was just enjoying spending time with my family and friends and getting back to normal.

“I felt a sense of peace this time, despite not breaking the record. Now, like everyone else, I’m back in survival mode.”

Parks admits that on his most recent adventure there were times when “I felt mentally low and isolated”. He managed to get through it and refused to give up.

“I chose to be in that position and had put two years of planning and training into the expedition.  The big driver for me was feeling part of something bigger than just the daily grind of skiing and pulling the sled,” he said.

“I was part of a team that had put so much commitment and effort into preparing me for the world record attempt. That’s what really drove me on – and it is the same now.”

Most Solo, Unsupported and Unassisted journeys in Antarctica – 4

Craig Glenday, Editor in Chief at Guinness World Records said: “Richard’s record-breaking expeditions require the kind of determination and drive that gets your name etched into the history books.

“To spend so many days trekking alone in the most inhospitable part of the planet is a remarkable achievement, and I’m thrilled to be including Richard in the next edition of the Guinness World Records book.”