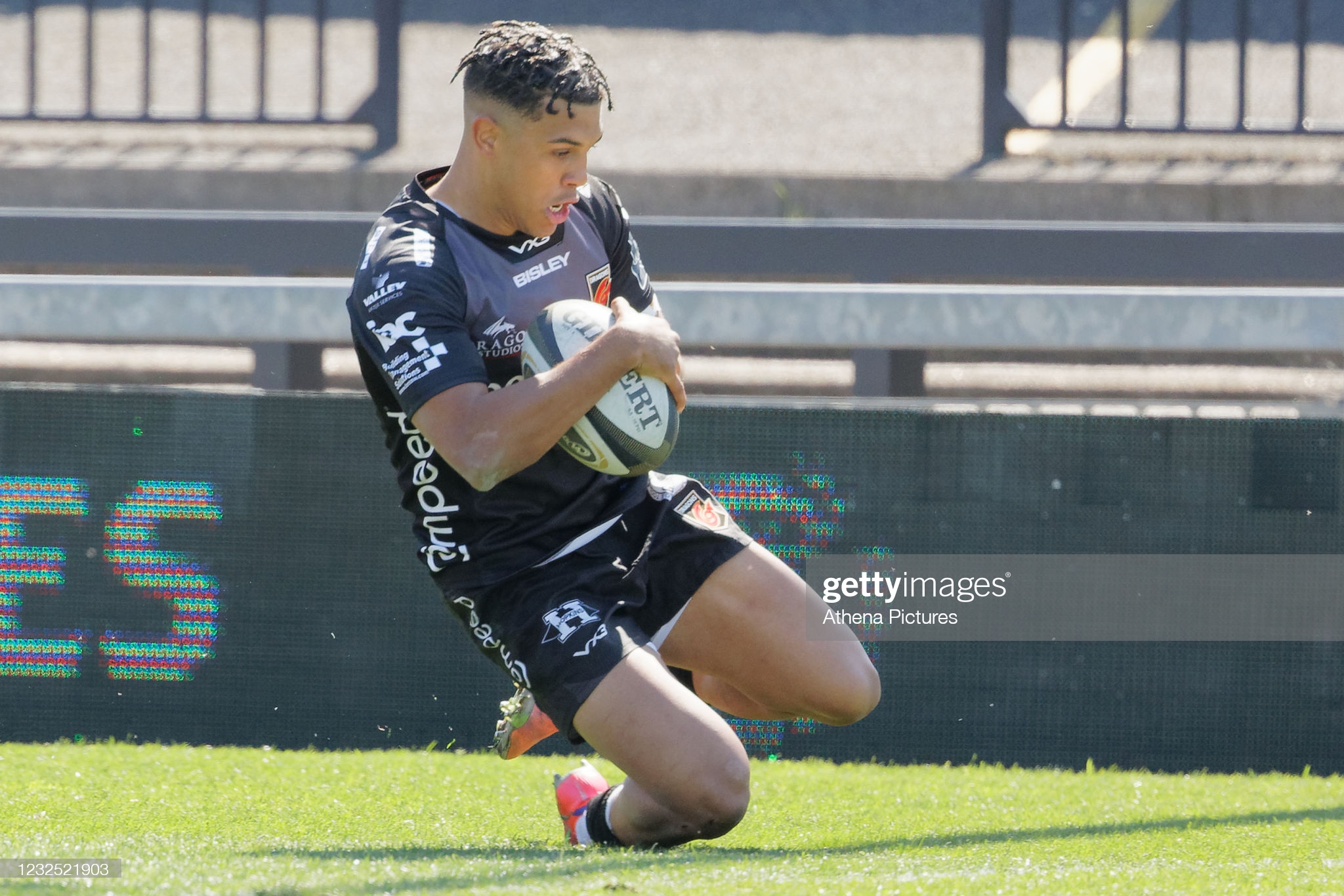 Rio Dyer scores for the Dragons against the Scarlets. Pic: Getty Images.

The former Wales Under-20 back has been in scintillating form for the men from Rodney Parade in the last two weeks with his remarkable pace standing out.

Dyer has now revealed the secret behind his speed.

“I used to do athletics back in 2015. I had Darren training me throughout lockdown and we did some extra speed work to try and stay on top of things,” the 21-year-old said.

“In school I did athletics competitions, but it got to the stage where I had to sway away from that to concentrate full time on rugby.

“Darren is good friends with my dad. He knew we weren’t training as much in lockdown and to stay on top of your speed you have to keep running and working on sprinting sessions.

“It really helped me when we came back to rugby that I still had my speed. Now I want to get as many games in as possible before the start of next season.”

With Dyer bursting down the wing, Dean Ryan’s Dragons hammered Scarlets in their Guinness PRO14 Rainbow Cup opener before losing to Cardiff Blues by a point.

Next up on Sunday are the Ospreys. Dragons are captained against the men from Swansea by Wales back-row Aaron Wainwright.

Gonzalo Bertranou and Dan Baker, who both signed new deals this week, start.

Jones is partnered at lock by Bradley Davies who is now fully recovered from being hit hard by Covid-19.

Davies’ positive test forced him into checking his oxygen levels at home.

“It’s nice to be back for some local derbies and I’m delighted to be back out on the field,” said the 34-year-old. “A few people have tried to retire me, but I’m still enjoying my rugby.

“I still train hard. I know when the day comes that I don’t enjoy rugby, I’ll call it quits, but I think I’ve still got a couple of years left in me.

“Dragons will be a tough game. The last time we played them in Bridgend they scored five tries against us and pulled our pants down really. They’re a much-improved and dangerous team.”

Ryan said: “We are looking to be consistent in our selection with a core of senior players and then rotating some of our youngsters so they can also get game time.

“We have chatted to Toby (Booth) to ensure we get the balance right and the Welsh derby games have so far produced competitive games, which produces great experiences.

“This competition has freshened up training and people have become alive with the opportunity. It has been good for us.

“It is our last game at Rodney Parade this season and would be nice to finish there with a good result.”