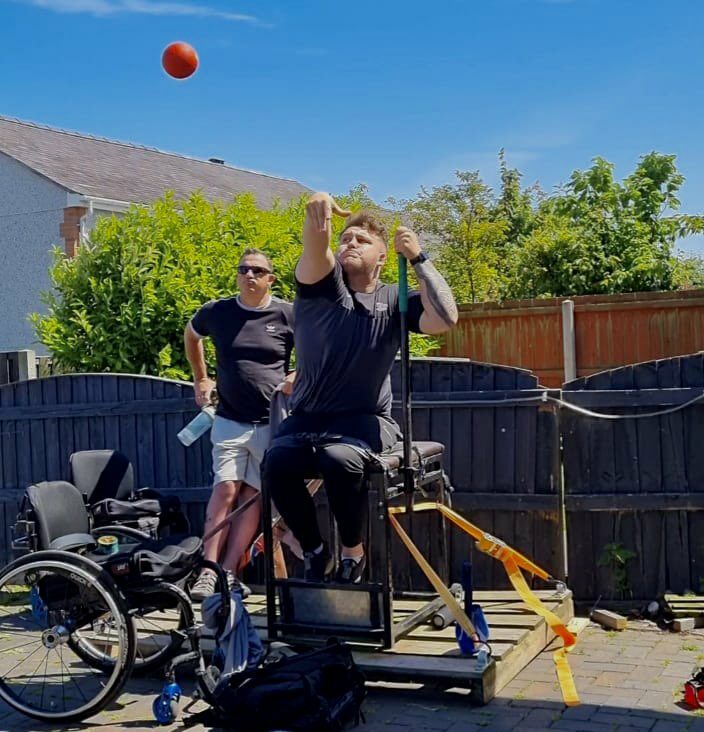 Kieran Jones training in his garden.

Aled Davies is off to another Paralympics with Great Britain this summer, his place having been confirmed earlier this week. He’s an inspiration to a generation, including Kieran Jones, the 19-year-old shot putter and wheelchair basketball star who is making rapid strides towards twin ambitions in two sports, as he tells Graham Thomas.

Kieran Jones admits he’s thrilled to be back competing as an elite shot putter – and so are his neighbours.

The 19-year-old para athlete has a summer of athletics meetings to look forward to again, while those living near his Anglesey home no longer have to worry about the state of his garden fence.

Kieran – who has also represented Wales at wheelchair basketball – spent much of lockdown training in his back garden, hurling an iron ball into a makeshift sandpit built near the fence.

“It was okay, but there were a couple of problems,” says the sports coaching student at Coleg Menai in Bangor.

“The concrete slabs started to crack when the shot landed, even though we had put down gymnastic mats to cushion them.

“Then, the sand we laid down worked better, but in the end when I hit the markers the sand started to push against the fence and it began to bow outwards into the lane behind.”

Worried onlookers were relieved when Kieran was eventually able to resume training back in the gym and at the track as restrictions on athletes started to be lifted.

The F34 class athlete was enjoying rapid progress as one the country’s most promising and multi-talented para athletes when lockdown hit in spring of last year.

Kieran had already become a British champion at the Activity Alliance National Junior Athletics Championships in 2019 and was due to attend a warm-weather training camp in Portugal with Disability Sport Wales.

“I was so excited about going, so lockdown was hard to take. It was a great opportunity for me as a person and an athlete and so it really knocked me back.

“Trying to stay focused was really difficult, but then the whole world came to a stop and it really hit me. To have a year of not doing anything has been really difficult.

“This has probably been the worst time I’ve gone through since I went from walking to being in a wheelchair.

“Not being able to do the things I loved was awful. My closest friends are in sport as well, so not seeing them was also very hard.

“But I’m lucky I’ve got a great family around me. They saw me dip, but they would always bring me up.”

After his back garden routines gave him at least some kind of outlet, Kieran was eventually able to return to the gym three months ago.

His strength and conditioning coach is Ray Williams, the renowned weightlifting guru and Welsh national coach who moulds champions such as Gareth Evans at the famous gym in Holyhead.

Nathan Stephens and Anthony Hughes are Kieran’s athletics coaches based in Cardiff – travel has been another lockdown obstacle – while his inspiration is taken from Welsh Paralympic superstar Aled Davies.

There were pictures of the Rio and London Paralympic champion on the wall of the clinic when Kieran was in his early days as a wheelchair user.

A fantastic day in the office, new PB in training of 7.64 meter an increase of 15 cm from my previous of 7.49 meters 😁😁😁 @dsw_news @hawfc @DSW_NYB @BA_Paralympic pic.twitter.com/PwvN2jUSDw

“I was just struck by how great he looked in what he was doing,” says Kieran. “I take a lot of inspiration from Aled.

“He’s a proper celebratory but when I met him for the first time he was fantastic with me.”

His own journey into disability sport began when Kieran was 13 years old and life began to change.

His condition – hereditary spastic paraplegia (HSP) – is a rare, inherited neurological disorder that produces progressive weakness in the hip and leg muscles. It runs through certain members of his family, meaning his younger brother Ryan is also in a chair as is their father.

“Around 60 per cent of my family have it on my dad’s side,” says Kieran. “My younger brother was in a chair from birth, but I played football, and rugby when I was small.

“Then, I started getting pains in my legs and I wasn’t as fast as I was before. I was slower than the others and didn’t feel I could really join in.

“I was about 10 when I started wheelchair basketball. I didn’t need the chair all the time then, so I used to walk into the sessions, jump in the chair, and then jump back out afterwards.

“I didn’t like it, though, and so I stopped. I was only doing it because my dad and brother were playing.”

Three years later, though, Kieran’s time in the chair increased and he returned to wheelchair basketball with a renewed focus. Soon, his talent was obvious and within a couple of years he was captain of the Wales U15 side.

He still plays for leading club side North Wales Knights, but combining a dual sports career is tough going when you’re a 19-year-old in a wheelchair during a global pandemic.

There is, though, another wheelchair basketball aim he has set his sights on and one which he believes he can combine with his progress as an athlete.

Next year’s Commonwealth Games in Birmingham will feature wheelchair basketball for the first time, showcasing the 3 v 3 format – and Kieran intends to be there with Wales.

“I like the team spirit of a team, people pick you up when something goes wrong.

“The goal is to get in the squad for Birmingham. The training schedule will be tough to fit in with athletics, but I like going the extra mile to prove people wrong.”

From 12 months ago, when he felt as if his world was closing in on him as Covid took its grip, suddenly there are possibilities to be explored – dreams to be chased and challenges to overcome.

“I’m 19 now but as I’ve grown up I’ve realised that being in a wheelchair isn’t as bad as it might seem.

“My mates say, ‘wow that would be just the worse thing if it happened to me’, but because of the support I have from my family, who cares?

“I’m no different to them. If someone said, would you take the chair away and walk again now, I’d say no. The people I’ve met and the opportunities I have had have been amazing.

“I don’t want to change that.”