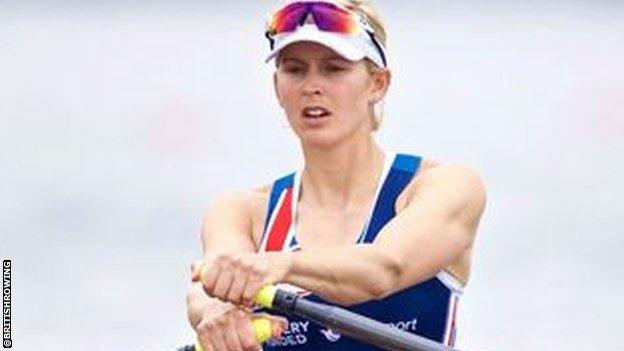 Vicky Thornley missed out on A final on her rowing comeback. Pic: British Rowing

Vicky Thornley is confident she can use her European Championship disappointment to her benefit for the rest of the season.

Wales’ Olympic silver medallist just missed out on the A final of the single sculls in Lucerne on her return to competitive rowing after taking a break last season.

Thornley finished fourth in her semi-final of the single sculls with the top three progressing to the final on Sunday.

“I’m gutted to not have made the A final and to not quite be back where I wanted after my break,” said the 31-year-old from St Asaph. “I’ve learnt a lot from this weekend that I will take back into training and use for the rest of the season.”

Thornley, who won the European title in 2017 after switching to the single sculls having won double sculls silver in Rio 2016, took a break last year having been diagnosed with fatigue from overtraining.

Fellow Welsh rower Graeme Thomas and John Collins produced a blistering sprint in the men’s double sculls after sitting in fourth place at the 1,000m mark.

They finished the race in second to secure a spot in Sunday’s A final.

“We’re pleased with the result but it wasn’t a perfect race,” said Preston-born Thomas. “We need to work on our pace at the start to put ourselves in a stronger position so we’re not having to throw the kitchen sink at it in the second half.”

Beccy Girling was part of a women’s four whose fast finish saw them finish first in their repechage, pipping their Russian rivals to reach the A final.

And Cardiff University graduate Josh Bugajski was part of the men’s eight that led their repechage from start to finish to also reach the final.

But there was disappointment for Zak Lee-Green in the lightweight men’s doubles with Will Fletcher as they finished fifth in the semi-final to qualify for the B finals.

Tom Barras will also contest the B final in the single sculls as he just missed out on the main final by a second.