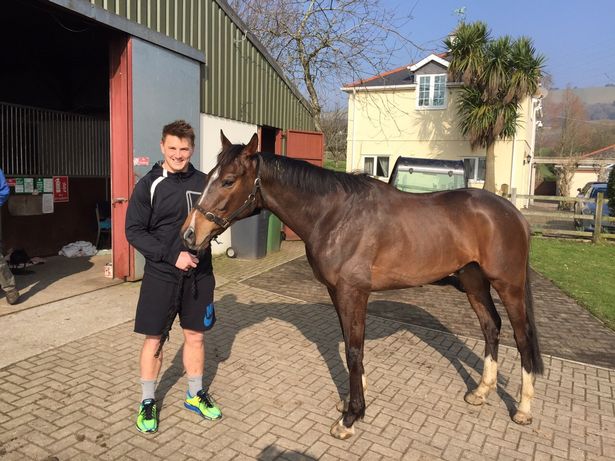 If Jonathan Davies was not required for duty by Wales against England this Saturday, then he might well have been making plans to visit Chepstow.

After all, that would have allowed the Scarlets, Wales and British and Irish Lions player to indulge in his two favourite sporting passions – rugby union and horse racing.

Six Nations Raceday at Chepstow – where there are seven races over the jumps – will enable everyone with an interest in the big England-Wales clash at Twickenham to combine watching the match on the big screens in the Fan Zone, with an exciting full day’s racing from 1.00pm.

Davies – one of Welsh rugby’s biggest stars, who earned his 100th Test cap at home to Scotland earlier this month -is certainly not the first to combine a love of racing with his rugby.

The oval ball game has had plenty of players who have become more than just racing punters over the years, with many like, Davies, becoming owners and some even finding success as trainers.

Davies – known to most in Welsh rugby circles as “Jon Fox” as he was raised in Bancyfelin in Carmarthenshire by parents who ran the Fox and Hounds pub – puts his enthusiasm for racing down to his grandfather.

“It was my grandad who got me into the sport,” he says. “I would always listen to him call in his bets as a kid.

As we head towards Six Nations Race Day this Saturday we’ve been looking at the connections between Welsh rugby & horse racing including @JonFoxDavies‘s connection with Potters Corner – here’s the story – https://t.co/ryr7xwFJqS pic.twitter.com/hO8RUfbfC1

Davies’s enthusiasm for racing as well as rugby turf was shared by his former teammate at the Scarlets, Gareth Maule, who had a friendship with trainer and former jockey, Christian Williams.

Together, they decided to join with Stars Sports Racing as part-owners of Potters Corner, who became the first Welsh-trained horse for 54 years to win the Welsh Grand National at Chepstow in 2019.

“We always said we would get a horse and we really struck gold with Potters. He won the Midlands National at Uttoxeter, he won the Welsh National and for a group of us who love racing to have some big wins has been fantastic.

“They’re just great days and memories, like the memories of successful days on the rugby field.”

Before Davies, his former Wales and Scarlets teammate Stephen Jones – now the Wales assistant coach – was also a big racing fan who took his enthusiasm into ownership.

Jones was co-owner of Ski Sunday, the Tim Vaughan-trained horse he shared with fellow former Scarlets Regan King – a New Zealander capped by the All Blacks  – and Simon Easterby.

Like Jones, Easterby might have fancied a day at Chepstow on Saturday. But, like his old mate, he’s busy. While Jones will be at Twickenham with Wales, Easterby is the current Ireland forwards coach and will be preparing to face Italy in Dublin on Sunday.

has some big race entries coming up including the Cheltenham Festival and Grand National. Here he is schooling this morning @CWilliamsRacing . To buy a share in click here https://t.co/veLyXk2gXM #RacehorseClub #RhC #PottersCorner pic.twitter.com/xNwvobwVmi

Two other members of the current Wales team share Davies’s passion for the sport of kings.

Scarlets scrum-half Gareth Davies is a co-owner of Robin of Sherwood, the David Rees-trained horse who was a winner at Warwick last year.

And Alex Cuthbert – the Ospreys wing – is not just a horse racing fan, but was a skilled showjumper as a youngster, winning regional competitions on Neapolitan II, which went on to qualify for the Horse of the Year Show.

Davies’s share in Robin of Sherwood is with Scarlets prop Rob Evans, so the thread between West Walian rugby players and horses runs deep.

Part-owned by former England rugby stars Mike Tindall and James Simpson-Daniel as well Robinson, the horse had quite a following.

Robinson, now a familiar face as a TV pundit and touchline interviewer on BBC Wales’ Scrum V – says racing gave him sporting highlights which were right up there alongside anything he achieved on the rugby field.

“When your horse crosses the line, that feeling of excitement and the adrenalin rush is similar to when you kick a conversion or score a try to win a match,” he says.

“The nerves, though, are even worse with a race horse. You’re emotionally involved, like with a rugby team, but when the race starts you are absolutely helpless.

“I know we got lucky with the Dude. But it was just thrilling to be part of the journey.”

It’s not only Welsh rugby players that share the love of racing, either.

England, Ireland and Scotland have all produced Six Nations stars who have moved their attentions to the race track.

Aside from Tindall and Simpson-Daniel, current England stars Ellis Genge, Jamie George and Elliot Daly are all regular race-goers.

Rovetta, trained by Jessica Harrington and ridden by Mark Enright, win handsomely in the Mares Handicap – the horse is part-owned by Sean O’Brien pic.twitter.com/7zQCCUQo8w

Not only did he beat Australia with his South of Scotland team in the 1980s, but he has gone on to become one of Scotland’s most successful trainers, including taking Bellshill to an Irish Gold Cup win in 2019.